Mormon doctrine and how it is established: an official explanation? 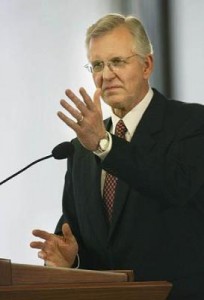 At the April (2012) General Conference of the Mormon Church, Apostle D. Todd Christofferson told the congregation,

“…we must admit there has been and still persists some confusion about our doctrine and how it is established. That is the subject I wish to address today.”

In his remarks, Apostle Christofferson explained,

“The President of the Church may announce or interpret doctrines based on revelations to him (see, for example, D&C 138). Doctrinal expression may also come through the combined council of the First Presidency and Quorum of the Twelve Apostles (see, for example, Official Declaration 2)… At the same time it should be remembered that not every statement made by a Church leader, past or present, necessarily constitutes doctrine. It is commonly understood in the Church that a statement made by one leader on a single occasion often represents a personal, though well-considered, opinion, not meant to be official or binding for the whole Church. The Prophet Joseph Smith taught that ‘a prophet [is] a prophet only when [he] is acting as such.” (Apostle D. Todd Christofferson, “The Doctrine of Christ,” Ensign, May 2012, p. 88)

This, after he said several pages earlier:

“By 1954, President J. Reuben Clark Jr., then a counselor in the First Presidency, explained how doctrine is promulgated in the Church and the preeminent role of the President of the Church. Speaking of members of the First Presidency and Quorum of the Twelve Apostles, he stated: ‘[We] should [bear] in mind that some of the General Authorities have had assigned to them a special calling; they possess a special gift; they are sustained as prophets, seers, and revelators, which gives them a special spiritual endowment in connection with their teaching of the people. They have the right, the power, and authority to declare the mind and will of God to his people, subject to the over-all power and authority of the President of the Church. Others of the General Authorities are not given this special spiritual endowment and authority covering their teaching; they have a resulting limitation, and the resulting limitation upon their power and authority in teaching applies to every other officer and member of the Church, for none of them is spiritually endowed as a prophet, seer, and revelator. Furthermore, as just indicated, the President of the Church has a further and special spiritual endowment in this respect, for he is the Prophet, Seer, and Revelator of the whole Church.'” (pp. 86-87)

OK, so let me get this straight:

Thus, why bother having these leaders in the first place if they can’t be fully trusted and might be just spouting off personal opinions that are not scriptural?

And it’s so confusing because in October 2010, 13th President Ezra Taft Benson’s speech “Fourteen Fundamentals in Following the Prophet” was quoted (twice) in General Conference, point by point. And in that speech Benson said that a prophet does not have to say “Thus saith the Lord” for something to be considered a word from the Lord. So, I’m left with the conclusion that I can trust a Mormon leader’s words only if my personal revelation tells me he’s not merely speaking from his own limited perspective/opinion. Here we go — it all boils down to personal revelation, doesn’t it?

OK, then, I get it. I’m so glad LDS Apostle Christofferson cleared things up. But wait. What if I, as a Mormon (for the sake of argument), determine by personal revelation that everything this apostle (note: he’s not even the President) just told us in the Conference was nothing more than just his personal opinion? I guess we can disregard everything he said in this article. Case closed…Is this what we call a spiritual free-for-all?

This entry was posted in Authority and Doctrine and tagged D. Todd Christofferson, Doctrine. Bookmark the permalink.

33 Responses to Mormon doctrine and how it is established: an official explanation?