All of Brigham Young’s Teachings Are True… 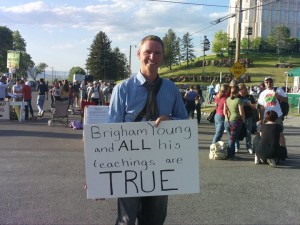 Jared, a Mormon Fundamentalist, brought his sign to the streets of Manti, Utah preceding a 2011 Mormon Miracle Pageant performance. He graciously agreed to give Aaron an interview (below).

Sharon surrendered her life to the Lord Jesus Christ in 1979. Deeply passionate about Truth, Sharon loves serving as a full-time volunteer research associate with Mormonism Research Ministry. Sharon and her husband live in Minnesota.
View all posts by Sharon Lindbloom →
This entry was posted in Fundamentalist Mormonism and tagged Adam-God, Brigham Young, Fundamentalists. Bookmark the permalink.

108 Responses to All of Brigham Young’s Teachings Are True…