Where did the Mormon doctrine of polygamy come from?
Emma knew. 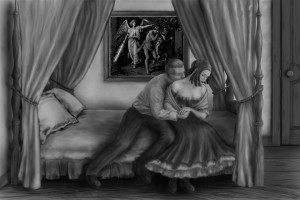 Image provided by Images of the Restoration

On July 12, 1843 Joseph Smith recorded what Mormons believe was a revelation from God “relating to the new and everlasting covenant, including the eternity of the marriage covenant, as also plurality of wives” (Introduction to D&C 132). In this section of what is now Mormon scripture, Joseph’s wife, Emma, is called out and told to “abide this commandment” (i.e., live The Principle of polygamy), or be destroyed.

Nobody disputes the historical fact that Emma never really warmed up to the idea of sharing her husband with other women. Nevertheless, she remained married to Joseph until he was killed a few months after their 17th wedding anniversary.

Catherine Baldwin Johnston was a young woman who visited Nauvoo with her husband in the early 1840s. She had a noteworthy encounter with Emma Smith related to polygamy, recounted below by her sister, Eudocia Baldwin Marsh.

About two years after the settlement at Nauvoo it was reported that Smith had received a “revelation” in regard to “Spiritual wives” or “celestial marriages” as they were called. This was strenously denied by the better class of Mormons, but the document as put forth and circulated by Smith, among his confederates has since been published and openly advocated by Brigham Young and the Church at Salt Lake, as all the world knows. In this “revelation” great pains had been taken to conciliate Emma, Smiths wife, and to prepare her for the new dispensation. In it she is addressed by name and commanded to “obey” or she will be destroyed. She was apparently obliged to acquiesce in some degree, at least outwardly, but no doubt felt much the same degree of indignation that any other woman would under the same circumstances. That she was not at all reconciled to this state of things I think is proven by the reply she once made to a question on the subject.

Some time after my first visit to Nauvoo one of my sisters accompanied her husband on one of his business trips to that place. They went to Smith’s Hotel and after supper were shown into a large parlor where seated around the room in groups of three or four were ten or twelve well dressed young women. They were laughing and chatting together in a lively manner, some engaged with light needle work, others quite idle. Leaving his wife in the parlor her husband soon after went out into the town to attend to the business which had brought him there. He was detained until rather late, and my sister feeling somewhat fatigued asked to be shown to her room, where she began making preperations to retire for the night.

Her husband whose business to Nauvoo had been with some of the Gentile citizens–and who had been during the evening, regaled with terrible stories of kidnapping and sudden disappearences of visitors to the city–came in shortly afterwards and not finding her in the parlor where he had left her, immediately began storming around inquiring for and calling her loudly by name. As he passed through the long corridors, his wife heard his voice and much surprised opened her door and asked him what was the matter. When he saw her he ran and clasped her in his arms, exclaiming, “my dear wife I feared these wretches had spirited you away and I should never see you again.” She laughed at such an absurd idea, but he said, “If you had been listening to some of the tales I have heard to night, you too would have been alarmed. I shall never again permit you to be out of my sight when in this town.”

When they came down stairs next morning they were ushered into the parlor to await the announcement of breakfast. Most of the young women of the previous evening were again assembled there and presently Mrs. Emma Smith came in, and seated herself near my sister whom she had met before, and with whom she began talking in a friendly way. My sister’s mind however had been a good deal “wrought up” by what she had seen and heard, and she determined to express something of what she felt to some of these people. So she turned to her and said, “Mrs. Smith where do your people get this doctrine of Spiritual Wives?” The woman with a face flushed to a dark red, and with eyes blazing with fury said “Straight from Hell–Madam.” Some of the young women blushed, too. Some giggled, others looked stolid and indifferent, but a call to breakfast relieved the situation and no more was said.

(“Mormons in Hancock County: A Reminiscence,” reprinted in the Journal of the Illinois State Historical Society [spring 1971], Vol. 64 No. 1, 40-41. Punctuation minimally standardized. Paragraph breaks added for readability. Italics in the original.)

Sharon surrendered her life to the Lord Jesus Christ in 1979. Deeply passionate about Truth, Sharon loves serving as a full-time volunteer research associate with Mormonism Research Ministry. Sharon and her husband live in Minnesota.
View all posts by Sharon Lindbloom →
This entry was posted in Early Mormonism, Nauvoo, Polygamy and tagged Emma Smith, Nauvoo, Polygamy. Bookmark the permalink.

150 Responses to Where did the Mormon doctrine of polygamy come from?
Emma knew.