Mormons believe A Study in Scarlet is inaccurate 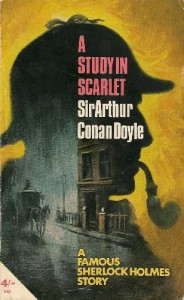 Following the complaint of a student’s mother, the Sherlock Holmes story, A Study in Scarlet, has been reviewed and removed from a Virginia school district’s sixth-grade reading list as age-inappropriate. It isn’t because the archaic writing style may prove difficult for sixth-graders. It isn’t because of the stalking and graphic murders of the two main victims in the story. It isn’t even because the overarching theme of the book is revenge. The reason the school board agreed to remove the book from the reading list is because it presents early Mormonism in a negative light. The concerned mother explained, “This is our young students’ first inaccurate introduction to an American religion.”

Sir Arthur Conan Doyle wrote the story in 1886. It’s about a young girl crossing the American plains, rescued by Mormons in 1847, taken to Utah Territory, and later forced to become a polygamous wife in a loveless marriage (you can find a more detailed description of the story on Wikipedia). Sir Arthur’s story alludes to Mormon polygamy, Danites, blood atonement, the absolute rule of the Mormon prophet, and the hopeless condition for anyone in Utah Territory who opposed him. Indeed, this is not a pretty picture of nineteenth-century Mormonism – but then, nineteenth-century Mormonism really wasn’t very pretty.

There is no question that polygamy was a main feature of Mormonism in Utah Territory, and ample evidence that many women lived The Principle under duress. Wilford Woodruff’s first wife, Phebe, can serve as an example. After publicly stating that she was proud of being a plural wife, a friend asked her in private, “How is it Sister Woodruff that you have changed your views so suddenly about polygamy? I thought you hated and loathed the institution.” Phebe replied,

“I have not changed, I loathe the unclean thing with all the strength of my nature, but Sister, I have suffered all that a woman can endure. I am old and helpless, and would rather stand up anywhere, and say anything commanded of me, than to be turned out of my home in my old age which I should be most assuredly if I refused to obey counsel.” (Quoted in Richard S. Van Wagoner, Mormon Polygamy, 101)

The Danites, a group of Mormon men organized and active under Joseph Smith (before the Mormons moved to Utah Territory), functioned as a sort of secret police:

“Men handpicked for their skill with guns and their courage, the Danites were sworn to secrecy and invested with cabalistic handshakes and signals. They would prove, across nearly half a century, well into Brigham Young’s reign in Utah, a devastatingly effective cadre of assassins, targeting apostates, enemies, rich Gentiles, and even Indians–in effect, the KGB of the Mormon church.” (David Roberts, Devil’s Gate: Brigham Young and the Great Mormon Handcart Tragedy, 50)

The Danites, as a named organization, was discontinued after 1838. But as the Mormon vigilante philosophy continued to function under Brigham Young, it was closely tied to the Mormon doctrine of individual blood atonement. According to this doctrine,

“There are sins that men commit for which they cannot receive forgiveness in this world, or in that which is to come, and if they had their eyes open to see their true condition, they would be perfectly willing to have their blood spilt upon the ground, that the smoke thereof might ascend to heaven as an offering for their sins, and the smoking incense would atone for their sins, whereas, if such is not the case, they will stick to them and remain upon them in the spirit world.” (Brigham Young, Journal of Discourses 4:53)

“Now take a person in this congregation who has knowledge with regard to being saved in the kingdom of our God and our Father and being exalted, one who knows and understands the principles of eternal life, and sees the beauty and excellency of the eternities before him compared with the vain and foolish things of the world, and suppose that he is taken in a gross fault, that he has committed a sin he knows will deprive him of the exaltation he desires, and that he cannot attain to it without the shedding of his blood, and also knows that by having his blood shed he will atone for that sin, and be saved and exalted with the Gods, is there a man or woman in this house but would say, `shed my blood that I might be saved and exalted with the Gods?’ All mankind love themselves, and let these principles be known by an individual and he would be glad to have his blood shed. That would be loving themselves, even unto an eternal exaltation. Will you love your brothers or sisters likewise, when they have committed a sin that cannot be atoned for without the shedding of their blood? Will you love that man or woman well enough to shed their blood? (Brigham Young, Journal of Discourses 4:219)

Modern Mormonism no longer preaches or practices the doctrine of individual blood atonement and sometimes denies it altogether. However, there is ample evidence that this doctrine was not only taught in Utah Territory, but also executed (see Tanners, Mormonism—Shadow or Reality, 398-404-A, 428-450, 493-515 for documented examples).

Brigham Young was the highest authority in Utah Territory. Complete obedience to him — in matters both ecclesiastical and temporal – was expected. John Taylor (who later became the third LDS Prophet) said,

“What is a man’s duty here? It is obedience to the oracles of God that are in our midst; …Now Brother Brigham has said all is right, and he is the representative of the Almighty upon the earth, and it is for us to stand by him and obey him; and he says ‘Rejoice, and live your religion, and all shall be well.’ Is not that the voice of God? It is.” (Journal of Discourses 5:191-192)

“We find our position a critical one. We are by no means sure that we would be permitted to leave, for it is boldly asserted we would not get away alive. The same threats have been made against disaffected Mormons. We were inclined to think them idle menaces, until a few days since, when three men were killed at Springville, sixty miles from this place, for making the attempt. They were shot, their throats cut, and their bowels ripped open. Another party was fired upon, and three of them wounded, one of them seriously. These outrages are perpetuated by Mormons, and we have every reason to believe by the orders of Brigham Young[.] No efforts are made by the authorities to bring the perpetrators to justice.” (Bigler and Bagley, The Mormon Rebellion: America’s First Civil War 1857-1858, 112)

Sir Arthur Conan Doyle was once asked about his portrayal of Mormonism in A Study in Scarlet. He explained, “All I said about the Danite Band and the murders is historical so I cannot withdraw that tho it is likely that in a work of fiction it is stated more luridly than in a work of history.” Perhaps Sir Arthur’s unvarnished depiction of Mormonism in Utah Territory is a bit much for Virginia’s sixth-graders to process, but the real-life historical accounts are no less lurid. Hopefully, older readers of A Study in Scarlet will be intrigued enough by the story to research the underlying historical facts and therein find the truth about this religion that always has, and still claims to be, the only church on the face of the whole earth with which God is well pleased (D&C 1:30).

82 Responses to Mormons believe A Study in Scarlet is inaccurate