Can a Christian believe that the Father is a great pumpkin in the sky?

Posted on January 12, 2012 by Aaron Shafovaloff 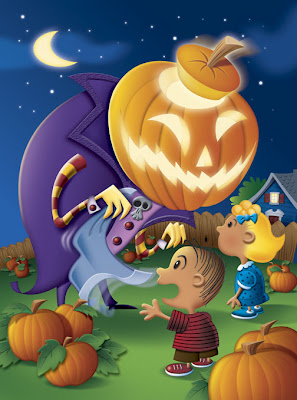 Is a Christian someone who believes in a person named “Christ”, no matter what attributes they think of this person or his Father having? This will sound like a silly and irreverent thought-experiment, but hear me out, as this is intended to draw out a principle:

If someone said they believed in the historical life, death, and resurrection of the person of Jesus Christ, but said that this person’s Father was a great pumpkin in the sky, would that person still legitimately be considered a Christian?

I asked that very question to a panel of Mormon scholars once, and one answered yes (preferring such a person to be called a “heretical Christian”), and another answered no (referring to Jesus’ statement in John 10:30, “I and the Father are one”). Of course, no Mormon believes that the Father is “a great pumpkin in the sky”, but it does seem Mormons tend to believe that the title of “Christian” should be granted to anyone who claims the person of “Christ”, no matter what attributes they think this person (or his Father) have. The conditions are understandably minimal: this person believes in Christ’s death, burial, and resurrection, and this person believes in Christ’s “divinity” (however a person chooses to define that).

Traditional Christianity seems to have an unspoken, hidden qualification: such a person lacks what we might call “defeater-beliefs”. Believing that God is a unicorn or is the Xenu of Scientology would be safe examples. Does Mormonism simply deny the idea of “defeater-beliefs” altogether, beliefs which would disqualify someone’s status as “Christian”? Have Mormons primarily done this to make it easier to justify their own status as “Christian”, or are there any compelling reasons they have from scripture and reason? Even those rare Mormons who believe that Jesus was a sinner seem to be embraced as fellow Mormons. Is there simply no limit to what a “Christian” can believe beyond what is considered the minimum requirement?

The heart of my question for Mormons is whether the attributes and identity of Jesus and the Father matter with respect to the theological and spiritual definition of “Christian”. This of course is relevant to evangelical Christians, who don’t recognize as “Christian” those who believe the Father was once perhaps a mere mortal sinful man, or that he is potentially one among many in a larger genealogy of Gods. In fact, we happen to believe that these “defeater-beliefs” compromise the very nature and content of basic Christian beliefs, in an inevitably integrated and interconnected way. Call us bigoted, call us hateful, call us arbitrarily exclusive, but if someone believes that the Father is a great pumpkin in the sky, we don’t recognize them as Christian.

This entry was posted in God the Father, Jesus Christ. Bookmark the permalink.

43 Responses to Can a Christian believe that the Father is a great pumpkin in the sky?