Posted on February 23, 2012 by Sharon Lindbloom

In 1851 Mormon apostle Erastus Snow completed overseeing the production of a Danish translation of the Book of Mormon. It was the first non-English edition of the book ever published. When Deseret News provided an overview of the history of this translation work earlier this week, it reminded me of an old book about Mormonism that was written in Danish, precisely because of the Danish/English language barrier.

Secret History was written in 1876 by John (Johan) Ahmanson. Translated into English in 1984, Secret History provides an early “eyewitness account of the rise of Mormonism” from the perspective of a Scandinavian convert (every quote that follows is from John Ahmanson’s Secret History). 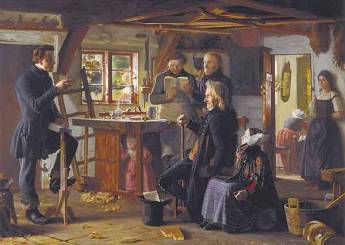 John Ahmanson was one of Denmark’s first converts to Mormonism, under the influence of Erastus Snow. He wrote of his conversion: “The enthusiasm of these proselyters was unbounded, because it truly seemed like the fire that animated the first Christians had returned once again in their association… Soon I was convinced in [my] heart.” John was baptized into the LDS Church near the end of 1850 and soon after went to Norway as a missionary. There he spread the Mormon gospel and spent seven months in jail for preaching an unauthorized religion before finally returning to Denmark in 1853. Determined to leave immediately for America, John ended up delaying his trip for two and a half years at the request of his mission president. It was not until 1856 that John Ahmanson left Denmark for Salt Lake City, Utah, to gather with the Saints in Zion.

It was John’s plan to travel from Iowa City to Salt Lake City in a covered wagon, but because of language issues, he was asked by LDS apostle Franklin D. Richards to accompany the poorer Danish emigrants who were making the journey by handcart. Obeying this request, John became attached to the ill-fated Willie Handcart Company. Fortunate to survive the trip, in December 1856 John was reunited with his family who had travelled to Utah separately in a wagon train. He wrote, “Forgotten were the hardships of the journey and the long separation, and joyfully we drove in to Zion.”

But for John and his wife, the City of the Saints was a rude awakening. They did not find the promised land that they had been promised. John wrote,

“…as we often attended the Tabernacle, we came to see that although it was always well filled with people who called themselves saints, yet it was from the spiritual standpoint an empty desert in which the spirit and teaching of Christ have no dwelling place. We perceived also that Mormon doctrine was an unhappy conglomeration that swings like a spiritual chaos helplessly between two opposing foci, namely between the Christian faith and Bible (which is here called ‘the ancient traditions’), and the revelations of the modern prophet.”

Finding that Mormonism had but “one great commandment: ‘blind, unconditional obedience’ to the Prophet and the leaders of the Church,” John and his wife determined to leave Utah–and Mormonism. They did so in the company of many other Mormon families who could not live with the disillusionment they experienced upon gathering with the Saints in Zion.

Years later John Ahmanson wrote his book, Secret History. He did so because, while the Book of Mormon was available in Danish for his converted countrymen to read, the real heart and soul of Mormonism was unknown to those who did not have a good command of the English language. John wrote,

“There are probably thousands of our compatriots living in Utah who because of the language factor alone are not only ignorant about Mormonism and its history in general, but also about the unnatural and criminal obligations which they have entered into in ‘the Endowment House.’”

Thus, Secret History was published in order to alert Danish-speaking people to the true nature of Mormonism, a religion that was not adequately explained by Mormon missionaries who “imparted only ‘a little here and a little there,’ since they presumably believed that we were capable of receiving only ‘milk, and not solid food.’” John Ahmanson was especially concerned for his fellow-Danes who agreed to dangerous endowment covenants without even knowing what they were:

“I have repeated [John Hyde’s description of the endowment ceremony] here because there are undoubtedly thousands of my compatriots in Utah who, although they have received the so-called endowment, nevertheless because of their ill acquaintance with the English language are still comparatively unaware of the true significance and character of this ‘endowment.’”

It strikes me how little things have changed since the 1850s. Mormon missionaries still go into the world using the Bible “only as a decoy for their missionary expeditions.” They still claim the validity of their religion lies in the Book of Mormon even though the Book “does not have the slightest significance in religious understanding.” Mormon missionaries still tell potential converts only “a little here and a little there,” still leaving the converts in the dark regarding the truth of where Mormonism came from and what it actually is.

And Christians still believe that Mormons desperately need to know the truth. In 1876 John Ahmanson said he wrote his book,

“In the belief that the truth, the naked and unreserved truth – even though it be bitter and disappointing for many – is the only sure means of leading these misguided but honest and upright people out of the shameful slavery of Mormonism, and back to the kind and humanitarian teaching of Christ (and possibly rescue others also from being led astray by this brazen and clever deception).”

Christians still love God’s truth and still care about the eternal fate of those who don’t know Him. So using the words of John Ahmanson we still declare,

“In the hope that these too might come to see that a Society which has to hide itself in the dark cannot be from Him who is the Light and the Father of light, this is [our] motive for bringing this all out here into the open.”

Sharon surrendered her life to the Lord Jesus Christ in 1979. Deeply passionate about Truth, Sharon loves serving as a full-time volunteer research associate with Mormonism Research Ministry. Sharon and her husband live in Minnesota.
View all posts by Sharon Lindbloom →
This entry was posted in Early Mormonism, Mormon History and tagged Danish Converts, John Ahmanson, Secret History. Bookmark the permalink.