Nauvoo Women: An Overlooked History of the Mormon Relief Society

Posted on November 10, 2011 by Sharon Lindbloom

This year (2011) Mormon ladies have been learning about the history of the Church’s Relief Society, said to be “the Lord’s organization for woman.” Julie B. Beck, the Relief Society general president wrote that “understanding our history is not only important but essential” (Ensign, January 2011, 7. Emphasis in the original). Ms. Beck gave several reasons for knowing, understanding and valuing the history, as well as “the examples of noble Latter-day Saint women” of the Relief Society. Therefore, most of the 2011 visiting teaching messages have included historical information about the early days of what was then called the Female Relief Society. 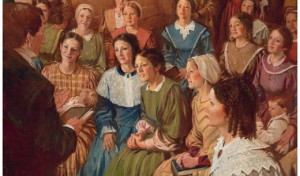 In January the history focused on Joseph Smith’s organization of the group, which took place on March 17, 1842, and the diversity of the relatively small group of women who were at that first meeting:

“The youngest were three teenagers, and the oldest, a woman in her fifties. Eleven of the women were married, two were widows, six were unmarried, and the marital status of one is unknown.” (ibid.)

This was the marital status of those women on March 17, 1842, but things soon changed for some of them.

Three months after the formation of the Relief Society (i.e., in June 1842), one of those first members, Sarah M. Cleveland, became the 12th plural wife of Joseph Smith. Sarah was the “woman in her fifties” listed above. She was also married to John Cleveland at the time (and had been since 1826). She remained with John throughout her life.

On the same day that Joseph Smith married Sarah Cleveland, he also married another woman who had been at the first Relief Society meeting: Eliza Snow. Unlike Sarah, Eliza had no other husband. The marriage was officiated by Brigham Young with Eliza’s Relief Society sister and soon-to-be sister wife, Sarah Cleveland, acting as witness. Eliza was 38 years old.

In August Joseph Smith married another woman who had been at the first Relief Society meeting, Martha Knight. Martha was not one of the widows mentioned in the list above, but she was a new widow (of one month) at the time that she married Joseph. She was 37 years old when she became Joseph’s 16th plural wife.

About a year later (June 1843) yet another original member of Relief Society married Joseph Smith. Elvira Holmes became Joseph’s 27th plural wife, just six months after she had married Jonathan Holmes. After Joseph Smith’s death, Jonathan stood in as proxy when his wife, Elvira, was married to Smith for eternity in the temple.

Desdemona Fullmer was another woman who had been at the first meeting of the Relief Society to later wed Joseph Smith. In July 1843, at the age of 34, Desdemona became Joseph’s 29th plural wife.

On the same day that the Relief Society was organized, another group of women were presented and accepted for membership in the Relief Society. In that group of seven women was Miranda Hyde, wife of LDS Apostle Orson Hyde. Orson was away serving a mission overseas when Miranda became Joseph Smith’s 10th plural wife  in April of  1842.

One more of Joseph Smith’s plural marriages had ties to that March 17th Relief Society meeting, though the young woman herself was not present. Elizabeth Ann Whitney was among the twenty initial members. Two months later Joseph Smith introduced Elizabeth and her husband Newel to the doctrine of plural marriage. After coming to embrace it, the couple gave their 17-year-old daughter, Sarah Ann, to the Prophet. Sarah became Joseph Smith’s 15th plural wife on July 27, 1842. Nine months later Sarah entered into a “pretend marriage” with Joseph Kingsbury; Joseph Smith performed the civil ceremony.

I doubt that this aspect of the history of the Female Relief Society will ever be included in the Mormon Church’s visiting teaching messages; but if, as Ms. Beck said, “understanding our history is not only important but essential,” it certainly ought to be.

59 Responses to Nauvoo Women: An Overlooked History of the Mormon Relief Society