Posted on April 9, 2012 by Aaron Shafovaloff

There are at least three parables in the Bible on the gradual growth of the kingdom unto maturity:

1. Parable of the Mustard Seed

> “The parable of the mustard seed… indicates that the kingdom Christ set up was to begin small but would gradually grow into a large, mature tree. Joseph Smith, however, interpreted the parable as representing ‘the Church as it shall come forth in the last days,’ with the mustard seed symbolizing the Book of Mormon sprouting out of the earth. [Joseph Smith, “To the Elders of the Church of the Day Saints,” 227]” (Charles Harrell, This Is My Doctrine: The Development of Mormon Theology, ch. 2)

2. Parable of the Wheat and Tares/Weeds

This parable implies the perpetuity of the wheat until final judgment. Joseph Smith instead taught that the wheat was choked, and that a second growing season was required:

> “And after they have fallen asleep the great persecutor of the church, the apostate, the whore, even Babylon, that maketh all nations to drink of her cup, in whose hearts the enemy, even Satan, sitteth to reign—behold he soweth the tares; wherefore, the tares choke the wheat and drive the church into the wilderness. But behold, in the last days, even now while the Lord is beginning to bring forth the word, and the blade is springing up and is yet tender.” (D&C 86:3-4)

But Smith then reverts:

> “Interestingly, Joseph Smith reverted to this more natural reading of the parable in December 1835, stating that the Savior was essentially telling his disciples, ‘The Church is in its infancy, and if you take this rash step [i.e., remove the tares], you will destroy the wheat or the Church with the tares: therefore it is better to let them grow together until the harvest, or the end of the world.’ [Joseph Smith, ‘To the Elders of the Church of the Latter Day Saints,’ 227]” (Harrell, ch. 2) 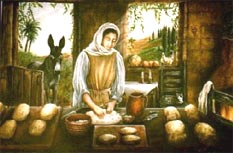 3. Parable of the Leaven

> “This seems to convey the same idea as the other parables—a gradual, spreading growth of the kingdom Christ established. According to Joseph Smith, however, this parable refers to the latter days as ‘the Church of the Latter-day Saints, has taken its rise from a little leaven that was put into three witnesses.’ [Joseph Smith, ‘To the Elders of the Church of the Latter Day Saints,’ 228] Later still, he saw other meanings in the three measures of meal, including, in December 1842, ‘the three in the Grand Presidency.’ [History of the Church, 5:207]” (Harrell, ch. 2)

If anything, this much is clear to me: The Bible was not sacred to Joseph Smith.

This entry was posted in Great Apostasy. Bookmark the permalink.