Experiencing the Mormon Temple for the First Time 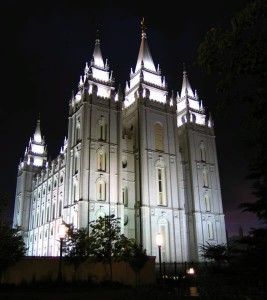 I recently came across a web page on which a Mormon man recounted his first temple endowment experience. Following his story, he posted “sincere replies from other church members” who wrote about their own first temple experiences. The perspectives of these Mormons who were excited and ready for the spiritual experience of their lives is really interesting and filled with insight for those of us who have never been through a Mormon temple endowment ceremony. I encourage you to read the whole web page if you have the time, but for the sake of discussion here at Mormon Coffee, here it is in a nutshell. (Please note that many of these experiences pre-dated the 1990 temple ceremony changes; therefore, some things mentioned are no longer part of the ceremony as it is performed in Mormon temples today.)

The anonymous man who wrote the initial story talked about his pre-temple expectations for what he would learn and experience:

…I prepared for my first time all excited, expecting the endowment ceremony to be about the ministry of Jesus Christ. I thought, perhaps they would enact the Sermon on the Mount? Or maybe they would show the Last Supper and have us participate as disciples? Or maybe they would portray other scenes in Christ’s ministry that were lost to time that revealed spiritual meanings.

Above all, I fully expected the temple covenants to be related to Christ’s ministry – helping the poor and the sick, forgiving others and loving one another. I imagined that I would see some of Christ’s parables enacted, and then make a covenant to do as Jesus taught. For example, covenant to be a good Samaritan, or forgive the prodigal sons among us, or not judge others.

Unfulfilled expectations. Many Mormons wrote about what they imagined the temple ceremony would be like, only to be disappointed. They thought it would be highly spiritual, uplifting and wonderful. Some even thought it possible that Jesus Himself would be there.

I remember wanting to have some clue of what to expect and, of course, my loved ones would only say that it was “wonderful, spiritually enlightening, and the closest thing to heaven that exists on this earth.” I halfway took that, in my own mind, to mean that Jesus would be there in person. What else could be so sacred that we could not talk about it, even with other worthy temple Mormons?

Instead of being spiritually moved, these Mormons found the temple ceremony to be “boring,” “belittling,” and “bizarre.” One Mormon wrote about his/her experience:

It would have been creepy to get naked [while wearing a poncho-like “shield”] and be touched by a stranger and then have them dress you in hideous underwear even without the bait-and-switch atmosphere, but I think the way they set it up so you go in there being told it’s going to be a wonderful experience, and then having it be something that’s awful, and then having to reconcile in your mind the temple oaths and learning weird code words and making sure all your temple clothes are on and tied just right and being naked are the things that are monumentally important to Heavenly Father adds to the disappointment and the confusion…

Confusing. This was another common theme in these stories. These Mormons were confused over what they were learning in the temple. A few examples:

The secret temple handshakes and passwords were what really freaked me out though. God needs handshakes? I thought he knew us enough to just let us through the veil into heaven.

I also didn’t understand that if God loved me, and I was doing what he wanted, would I have to worry about my throat being slit.

Then we started receiving handshakes, making signs and learning death penalties. I was blown away. This seemed like a secret combination to me. I had a sick feeling in my stomach. It seemed that the Book of Mormon had warned against such secret combinations which used handshakes. I was a bit confused.

Surprising. Instead of finding the temple ceremony centered on Jesus (as they had been told to expect), some Mormons noted that they found it focused more on Satan. One wrote, “There was little Jesus but plenty of Satan.” Another wrote, “Jesus Christ’s brother Satan, on the other hand, is the star of the temple ceremony.” After explaining that during the ceremony Satan tells people that if they don’t keep the covenants they make in the temple they will be in Satan’s power, one Mormon wondered,

If the rites were really God’s truth, then wouldn’t Satan be trying to talk everyone out of them? If I pray to Satan to ask him what I should do, would he answer: “Be a good Mormon or I’ll get you?”

The temple endowment made me wonder, whose side is Satan actually on? Apparently he’s on the Mormon Church’s side – that is, if you take the temple ceremony seriously.

So just follow Satan’s advice if you want to be a good Mormon. That’s what I learned in the temple.

Frightening. Total shock upon experiencing the temple endowment ceremony was a common theme among Mormons writing of their “first times.” They wrote of being “afraid” in the temple, of the ceremony having been a “horrible experience,” and being “freaked out.” One wrote, “As we stood in the prayer circle in our temple clothes with our hands raised, I looked around and thought ‘oh no, I’m in a cult!’” Another wrote,

So my first time through the temple I was freaked, wondering, is this a cult? If so, don’t give in, but keep quiet. I raised my hand for the oaths like everybody else and said, yes, but each time, inside mentally recited NO!

One Mormon summed up,

I passed through the veil into the beautiful celestial room of the Salt Lake City temple. It was full of people dressed as unusual as I was. What an eerie sight. My parents were already there…

Everyone was happy. But inside I was confused. The experience was different than what I had anticipated. My mother explained that I needed to go often to understand it better. After a few minutes, we left and returned to the locker room where I shed my robes for my suit, attired now in my garments.

When we left, I was afraid.

Eventually, the strangeness of the temple wore off. Repeated visits makes it all seem normal. But one thing never changes, the look of people’s faces in the session company. As a temple worker later in my life, I would often look at the faces of those attending. Nearly all of them had an empty look. No smiles, no interest, no nothing. We all just sat there enduring to the end.

Erecting a Façade. Not all Mormons feel this way about their temple experiences, of course. Surely there are those who share their honest opinions when they tell un-endowed Mormons that the temple is wonderful and the closest thing to heaven on earth. Yet, I wonder how many just go through the motions. One woman talked about how uncomfortable she was in the temple and wrote, “My family and closest friends are there, so unless I want to disappoint everyone I care about, I’m stuck…”

Another Mormon described his ongoing struggle this way:

But I tried. I honestly tried. I whittled myself down over years of temple attendance to try to fit into that mold prepared for me. It was so uncomfortable.

It was a serious Emperor’s New Clothes moment each time I went back through the temple.

Dad: “Son, wasn’t that just awesome?”
Me: “uh, yeah Dad… totally.”
But inside I was screaming…
Because it wasn’t.

Christians, we have good news for these people: the Emperor really “hasn’t got anything on.” Mormons may carry on the pretense, praising the temple just as the people in Hans Christian Andersen’s story praised the Emperor’s new clothes, but the fact is, all are naked and exposed before God. The temple has nothing to offer, nothing to make us presentable to God. It is the Lord, Himself clothed with majesty, who provides us with exquisite attire that no moth can destroy.

I will greatly rejoice in the LORD;
my soul shall exult in my God,
for he has clothed me with the garments of salvation;
he has covered me with the robe of righteousness.
(Isaiah 61:10)

Sharon surrendered her life to the Lord Jesus Christ in 1979. Deeply passionate about Truth, Sharon loves serving as a full-time volunteer research associate with Mormonism Research Ministry. Sharon and her husband live in Minnesota.
View all posts by Sharon Lindbloom →
This entry was posted in Mormon Temple and tagged Endowment, Temples. Bookmark the permalink.

32 Responses to Experiencing the Mormon Temple for the First Time