Much has been written over last week or so about Idaho’s ban of the sale of a particular brand of vodka because of its label. The spirit, made at Ogden’s Own Distillery in Utah, is called Five Wives Vodka, and the Idaho State Liquor Division doesn’t like it. On May 24 (2012) Howard Wasserstein, deputy director of the Liquor Division, explained. After stating the responsibility of the Division toward “the safety and well-being” of the citizens of Idaho, and its protocol for not approving products that are deemed “in poor taste,” Mr. Wasserstein concluded, “We feel Five Wives Vodka concept is offensive to a prominent segment of our population and will not be carried.” 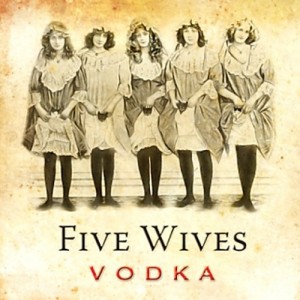 Because Idaho’s population is 27 percent Mormon, the reasonable conclusion most people and news outlets reached is that Idaho’s authorities believe Five Wives is a reference to Mormon polygamy; they want to spare any Mormons who might shop at state-run liquor stores the embarrassment of facing, once again, the religion’s polygamous past. But according to Ogden’s Own Distillery, Five Wives Vodka is not a reference to any of Brigham Young’s 55 wives or a portion of Heber C. Kimball’s 43 wives; it is not a reference to polygamy at all. Distillery partner Steve Conlin explains, “We aren’t even making fun; we are making a nod to the historical past of the American West.” The past he refers to is pre-Mormon era pioneers – the first American emigrants to attempt a wagon crossing from Missouri to California — who passed through Idaho and Utah in 1841. It is believed that the Bartleson–Bidwell wagon train was comprised of 66 men and five women – or five wives.

The Salt Lake Tribune suggests the artwork on the vodka’s label might be the problem. Tim Smith, owner of the micro-distillery says, “We’re not trying to offend anyone. It’s just a cute historical photograph we found on the Internet.” The Tribune’s Keira Dirmyer holds a different opinion. She notes in a June 4 article,

“The vodka label — depicting five turn-of-the-20th-century women dressed in undergarments holding strategically placed kittens — was deemed ‘offensive to a prominent segment of our population,’ according to Howard Wasserstein, deputy director of the Idaho State Liquor Division.

“…the backstory to that photograph goes beyond cute. The photograph depicts the notorious Barrison Sisters, immigrants from Denmark who toured the United States and Europe as hit vaudeville performers between 1890 and 1910.”

ABC News contacted Steve Conlin about the history of the photograph used on the vodka’s label:

“’That’s a new one,’ said Conlin. ‘We had not been aware of the history of the photo. Very interesting. The plot thickens, for sure.’

“He phoned back a few minutes later to add: ‘I’m not sure this changes our position. To us it’s just an image. We love the fact that there was a mystery to where it came from. And so what? They’re cats.’”

The Idaho State Liquor Division did not initially specify what part of the Five Wives Vodka “concept” it deemed “offensive” to “a prominent segment” of the population of the state. In interviews with the media last week, the Liquor Division indicated that the so-called ban was actually instituted because the Idaho market for vodka in a moderate price range was already flooded with other brands, though the official letter to Ogden’s Own Distillery made no mention of that concern.

“An Idaho government official denies that the state banned a vodka drink because it would be considered offensive to Mormons.

“Jeffrey R. Anderson, director of the Idaho State Liquor Division, told The Christian Post that ‘Five Wives’ vodka, a brand considered by some to be insulting to Mormons, was not banned by the state. ‘We did not “ban” the product on behalf of Mormons,’ said Anderson, who added that ‘Mormons had nothing to do with the decision nor were they consulted.’

“’The screening team believed the product was average, the price too high, and the label deemed offensive to primarily women.’”

One might think the Idaho State Liquor Division could have clarified its position a week ago before the misunderstanding regarding Mormon polygamy really took hold in the media. For whatever reason, the Liquor Division chose to let its ambiguity stand while news outlets went wild jumping to conclusions about Idaho’s concern over offending Mormons. But why would Mormons be offended?

Nineteenth-century Mormon polygamy is a fact of life. At one time, Mormons were openly proud of their doctrine and practice of plural marriage. In fact, support for and practice of polygamy was required in order to be a Mormon in good standing. LDS Apostle Orson Pratt taught,

“…I want to say a few words in regard to the revelation on polygamy. God has told us Latter-day Saints that we shall be condemned if we do not enter into that principle; and yet I have heard now and then (I am very glad to say that only a low such instances have come under my notice,) a brother or a sister say, ‘I am a Latter-day Saint, but I do not believe in polygamy.’ Oh, what an absurd expression! what an absurd idea! A person might as well say, ‘I am a follower of the Lord Jesus Christ, but I do not believe in him.’ One is just as consistent as the other. Or a person might as well say, ‘I believe in Mormonism, and in the revelations given through Joseph Smith, but I am not a polygamist, and do not believe in polygamy,’ What an absurdity! If one portion of the doctrines of the Church is true, the whole of them are true. If the doctrine of polygamy, as revealed to the Latter-day Saints, is not true, I would not give a fig for all your other revelations that came through Joseph Smith the Prophet; I would renounce the whole of them, because it is utterly impossible, according to the revelations that are contained in these books, to believe a part of them to be divine—from God—and part of them to be from the devil; that is foolishness in the extreme; it is an absurdity that exists because of the ignorance of some people. I have been astonished at it. I did hope there was more intelligence among the Latter-day Saints, and a greater understanding of principle than to suppose that any one can be a member of this Church in good standing, and yet reject polygamy. The Lord has said, that those who reject this principle reject their salvation, they shall be damned, saith the Lord; those to whom I reveal this law and they do not receive it, shall be damned.” (Orson Pratt, October 7, 1874, Journal of Discourses 17:224)

The Mormon Church discontinued the practice of polygamy (on earth) over 100 years ago, but it was a central (and necessary) doctrine of the Restoration in early Mormonism.

As graphic designer Allison Newhouse explained to me, if the Five Wives label was understood as a reference to polygamy, it would merely be “a wink and a nod to a history that is real and steeped in the culture of that part of the country, like when products are branded with a ‘wild west’ theme.” Not meant to offend, and really, not offensive. In fact, some Mormons might feel honored — or at least amused — except, perhaps, for the fact that vodka itself (alcohol) may offend Latter-day Saints.

UPDATE: Associated Press reports that the Idaho State Liquor Division has reversed its decision on banning Five Wives Vodka from the state.

Sharon surrendered her life to the Lord Jesus Christ in 1979. Deeply passionate about Truth, Sharon loves serving as a full-time volunteer research associate with Mormonism Research Ministry. Sharon and her husband live in Minnesota.
View all posts by Sharon Lindbloom →
This entry was posted in Early Mormonism, Polygamy and tagged Five Wives Vodka, Orson Pratt, Polygamy, Word of Wisdom. Bookmark the permalink.

32 Responses to Why Would “Five Wives” Brand Offend Mormons?