The June 2012 Ensign magazine included an article titled, “The Honor and Order of the Priesthood” by President of the Quorum of the Twelve [Mormon] Apostles, Boyd K. Packer. The article began by relating a story about Mormonism’s 12th Prophet Spencer W. Kimball’s trip to Denmark in 1976. During this trip Mr. Kimball visited the Vor Frue Church to see the original Christus statue by Bertel Thorvaldsen. (Replicas of Thorvaldsen’s sculpture currently stand in several Mormon visitors centers–and Mormon homes–around the world.) 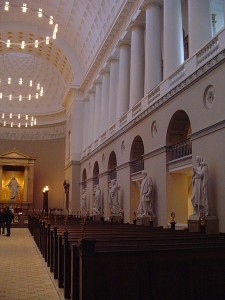 Also displayed at the Danish church were Thorvaldsen’s statues of the biblical apostles. As Mr. Packer related the story,

“In Peter’s hand, depicted in marble, is a set of heavy keys. President Kimball pointed to those keys and explained what they symbolized. Then, in an act I shall never forget, he turned to President Benthin and with unaccustomed firmness pointed his finger at him and said, ‘I want you to tell everyone in Denmark that I hold the keys! We hold the real keys, and we use them every day.’ (Ensign, June 2012, p. 21. Emphasis in the original.)

Mr. Kimball’s words here seem to be a declaration to the Danish people that the keys of God’s kingdom are present and operative in the Mormon Church (and more specifically, operating through the president of that church). It is nothing more than an informational statement asserting belief in the Mormon Church’s possession of God’s authority. But as Mr. Packer has told this story elsewhere, the point of the message has been aimed a bit differently.

At the April 1995 General Conference Boyd Packer first set the scene and then said,

Here Mr. Kimball’s words were not merely a message to the world that the keys of God’s kingdom are present in the Mormon Church; they were a criticism, a disparagement, a put-down if you will, of all (non-Mormon) religious leaders in Denmark who understood that they, as believers in Christ and leaders in His universal church, possessed the authority of the keys that Jesus promised in Matthew 16:18-19.

While the most recent retelling of the “I hold the keys” story takes the edge off of Mr. Kimball’s denunciation of Denmark’s ministers, Mormon missionaries in Italy are being encouraged with the sharper version of the incident. In a March 19, 2012 “letter to our missionaries and friends of Italy,” former Italy Rome Mission “President and Sister Pacini” disclosed the fact that, when finished, the new Mormon Temple in Rome will contain not only a replica of Thorvaldsen’s Christus statue, but will also house replicas of his sculptures of the twelve apostles (which were carved in Italy out of Italian marble in the early 1800s). To “close [the] thought” on this “faith-promoting” story, the letter recounted Spencer W. Kimball’s response to seeing the originals of those sculptures in Denmark. “I want you to tell every prelate in Denmark that they do not hold the keys! I HOLD THE KEYS!”

This is a “commanding” reminder for Rome’s missionaries that The Church of Jesus Christ of Latter-day Saints is not merely another “Christian denomination,” as could be inferred from Mr. Packer’s milder recounting of the story in the June Ensign. In fact, Mormon scripture insists that the Mormon Church is “the only true and living church upon the face of the whole earth, with which…the Lord, [is] well pleased” (D&C 1:30). Mr. Packer’s 1995 telling of the “I hold the keys” story, in all of its severity, better illustrates the true nature of Mormonism and Joseph Smith’s claim that non-Mormon churches are “all wrong…their creeds [are] an abomination…those professors [are] all corrupt” (Joseph Smith—History 1:19).

10 Responses to A Kinder, Gentler Mormonism?