Mormonism and Visitations from the Dead

“We will not finish our work until we have saved ourselves, and then not until we shall have saved all depending upon us; for we are to become saviors upon Mount Zion, as well as Christ. We are called to this mission. The dead are not perfect without us, neither are we without them [see D&C 128:18]. We have a mission to perform for and in their behalf; we have a certain work to do in order to liberate those who, because of their ignorance and the unfavorable circumstances in which they were placed while here, are unprepared for eternal life; we have to open the door for them, by performing ordinances which they cannot perform for themselves, and which are essential to their release from the ‘prison-house,’ to come forth and live according to God in the spirit, and be judged according to men in the flesh [see D&C 138.-33-34].” (Teachings of the Presidents of the Church, Joseph F. Smith, 410) 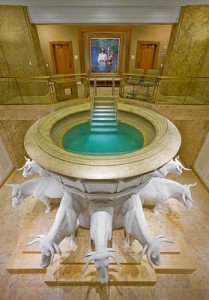 Because the dead are such an integral part of Mormonism, it makes sense that Mormon children would be taught about the Church’s doctrine of baptism for the dead.

In a Mormon Church manual produced for teaching children ages 8 through 11 (Primary 5: Doctrine and Covenants: Church History, 1997), children learn “Joseph Smith Teaches about Baptism for the Dead” (Lesson 34, 193-197. Thanks to Keith Walker for drawing my attention to this lesson).

The lesson teaches children both the historical background on the development of Mormonism’s baptism for the dead as well as the scriptures that Mormons understand to be support for the doctrine. As part of the lesson, the manual offers a few “enrichment activities” designed to enhance the children’s grasp of the importance of baptizing the dead. Two of the offered enrichment activities focus on telling the children what most of us would call ‘ghost stories.’

The first is about two friends, Brigitte and Carla.

Brigitte and Carla met in the third grade in Europe. Carla had just been baptized and wanted everyone to know she was a member of the “only true church.” Some of Carla’s classmates made fun of her for saying this, but Brigitte became her friend.

Brigitte’s family was active in their own church, but they were respectful of other religions. Brigitte even went to Church activities with Carla a few times. Brigitte and Carla remained friends all through their school years. Then, at seventeen years of age, Brigitte died.

Two months later Carla awoke in the night to see Brigitte standing at the foot of her bed. She did not speak, and Carla wondered why she had appeared to her. The following year Brigitte visited Carla again, and she came a third time the next year.

On the third night Carla woke her husband and told him about Brigitte’s visits. They both felt Brigitte had been taught the gospel plan in the spirit world and had accepted it. Now she wanted to be baptized. Carla and her husband prayed and asked the Lord how to obtain the necessary records. They were inspired to contact a researcher and were able to get Brigitte’s death certificate. Carla was now able to send in Brigitte’s name to the temple so her temple work, including baptism, could be done.

A few weeks later Carla again awoke to see Brigitte. This time Brigitte was dressed in a white gown and was standing in a place that looked like a baptismal room. The next morning Carla received a letter from the temple telling her that the baptism for Brigitte had been done. (See Carla Sansom, “From Beyond the Veil,” Ensign, Feb. 1978, pp. 49–50.)

The second enrichment story for the children is about the experience of a temple recorder in the Manti Temple:

Brother J. Hatten Carpenter, who served as a recorder in the Manti Temple, told of a patriarch who was watching baptisms for the dead being performed in the temple one day.

The patriarch saw “the spirits of those for whom they were officiating in the font by proxy. There the spirits stood awaiting their turn, and, as the Recorder called out the name of a person to be baptized for, the patriarch noticed a pleasant smile come over the face of the spirit whose name had been called, and he would leave the group of fellow spirits and pass over to the side of the Recorder. There he would watch his own baptism performed by proxy, and then with a joyful countenance would pass away [to] make room for the next favored personage who was to enjoy the same privilege.”

As time went on, the patriarch noticed that some of the spirits looked very sad. He realized that the people in the temple were finished with baptisms for the day. The unhappy spirits were those whose baptisms would not be performed that day.

“‘I often think of this event,’ says Brother Carpenter, ‘for I so often sit at the font, and call off the names for the ordinances to be performed which means so much to the dead’” (quoted in Joseph Heinerman, Temple Manifestations [Manti, Utah: Mountain Valley Publishers, 1974], pp. 101–2; see also The Utah Genealogical and Historical Magazine 11 [July 1920]: 119).

Mormons are inspired by these stories. Unlike Christianity, which recognizes a biblical prohibition against contact with the dead (e.g., Deuteronomy 18:9-14), Mormonism embraces it. Joseph Heinerman, whose book is quoted (above) in the Primary 5 manual, states,

“These temple manifestations signify God’s distinct approval of the temple labors performed by His people here upon the earth. Hopefully, these inspiring stories will edify the readers as they have me and motivate them to perform temple work more diligently on behalf of both the living and the dead.” (Temple Manifestations, Preface)

God says communication with the dead is a sin, yet Mormonism teaches little children to welcome necromantic contact, be inspired by it, and interpret it as God’s direction and/or approval of proxy ordinance work for the dead. Does anyone else find this troubling?

“…Whoever causes one of these little ones who believe in me to sin, it would be better for him to have a great millstone fastened around his neck and to be drowned in the depth of the sea.” (Matthew 18:6)

Sharon surrendered her life to the Lord Jesus Christ in 1979. Deeply passionate about Truth, Sharon loves serving as a full-time volunteer research associate with Mormonism Research Ministry. Sharon and her husband live in Minnesota.
View all posts by Sharon Lindbloom →
This entry was posted in Baptism for the Dead, Mormon Culture and tagged Baptism for the Dead, Joseph F. Smith, Necromancy, Primary, Temple Manifestations, Visions. Bookmark the permalink.

74 Responses to Mormonism and Visitations from the Dead