Posted on October 25, 2012 by Aaron Shafovaloff

Readers: For context, you can start by reading the Baptist Times article here, and then Hellen’s letter here.

While I realize that there are a good number of Mormons who reject what their own leaders have taught, or at least mentally disassociate themselves from what their leaders have taught about fundamental things like the nature of God and forgiveness, it is still true that Mormonism continues to teach and perpetuate 1) Lorenzo Snow couplet theology and 2) that “after all we can do” means to fulfill a meritorious set of prerequisites for receiving forgiveness and eternal life.

“The arguments he uses against The Church of the Latter Day Saints are outdated and ill-researched. President Snow served from 1898 to 1901, well over 100 years ago, I do not feel it is fair to try to influence people’s opinions on any organisation or denomination by quoting such historical leaders…” (emphasis added)

Consider that the official LDS priesthood and Relief Society manual to be used for 2013 (you read that correctly: 2013), Teachings of the President of the Church: Lorenzo Snow, blatantly and explicitly teaches the couplet on page 83 as a true, “sacred communication” revealed from God: 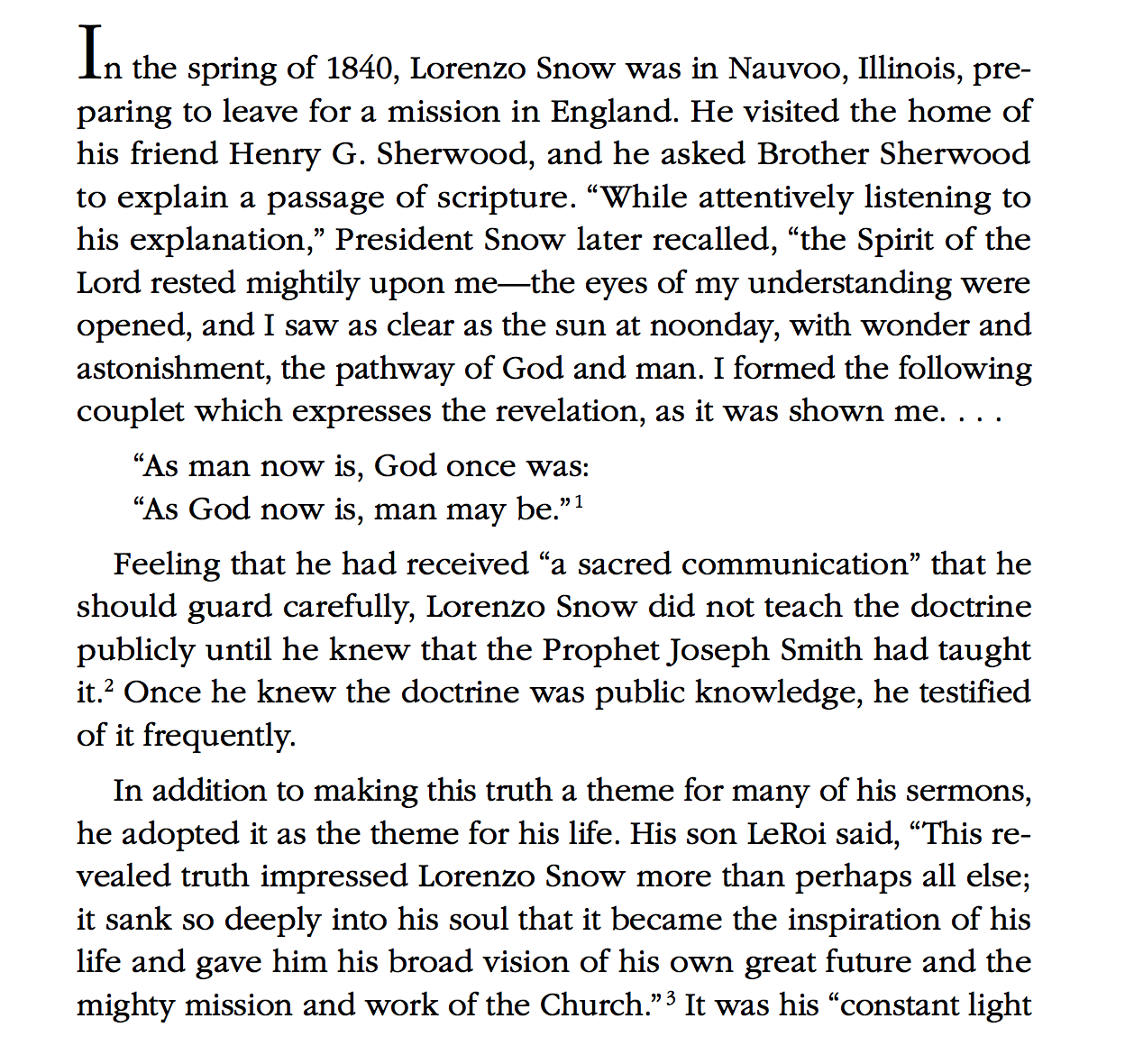 Another official LDS Melchizedek Priesthood and Relief Society manual, Teachings of Presidents of the Church: George Albert Smith, copyrighted in 2010 and used as curriculum in 2012 (you read that correctly: 2012) teaches this as well:

“We believe that we are here because we kept our first estate and earned the privilege of coming to this earth. We believe that our very existence is a reward for our faithfulness before we came here, and that we are enjoying on earth the fruits of our efforts in the spirit world. We also believe that we are sowing the seed today of a harvest that we will reap when we go from here. Eternal life is to us the sum of pre-existence, present existence, and the continuation of life in immortality, holding out to us the power of endless progression and increase. With that feeling and that assurance, we believe that “As man is, God once was, and as God is, man may become.” [See Lorenzo Snow, “The Grand Destiny of Man,” Deseret Evening News, July 20, 1901, 22.] Being created in the image of God, we believe that it is not improper, that it is not unrighteous, for us to hope that we may be permitted to partake of the attributes of deity and, if we are faithful, to become like unto God;…” (“Teaching of Presidents of the Church: George Albert Smith”, 70-71)

Those who say this teaching has “no functioning place” in Mormonism are either lying, uninformed, or are in denial. To quote Ron Huggins‘ academic paper on the couplet:

“Lorenzo Snow’s couplet summarizes a truth that still lives at the heart and logical center of the whole Mormon religious system. Evangelicals are not therefore ‘bearing false witness’ when they regard it as representative of Mormon belief and critically discuss it as such.”

There are indeed some Mormons who reject the idea that God was once a mere mortal (not yet a God), and/or that we can become Gods (the kind worshiped by future spirit children), but this is the minority position, not the traditional, institutional, or mainstream Mormon position. So Bobby is absolutely right to generalize Mormonism as teaching it and Mormons as believing it. I ask thousands of Mormons whether they believe God was once perhaps a sinner, and about two-thirds of them answer in the affirmative. “Neo-orthodox” Mormons, and evangelicals who dialog with “neo-orthodox” Mormons, understandably desire to portray Mormonism in the best possible light, but it is best to give an accurate account of the state of affairs, recognizing both the perpetuated traditional position and the minority neo-orthodox position among Mormons.

On #2, consider that the currently published and disseminated True to the Faith manual, sold at official LDS Distribution centers around the world and included in the Missionary Reference Library for Mormon missionaries, perpetuates the traditional reading of “saved by grace, after all we can do” from 2 Nephi 25:23. On page 77 it reads, “the phrase ‘after all we can do’ teaches that effort is required on our part to receive the fullness of the Lord’s grace and be made worthy to dwell with him.” Notice also how the LDS Bible Dictionary (published in the standard LDS “quad”) construes the passage:

This has been the standard, institutional, mainstream Mormon interpretation of the passage since the late 1950’s. You can read for yourself a plethora of quotes by LDS leaders on this passage. The modern neo-orthodox Mormon reading of the passage, that “after all we can do” means “in spite of what we can or can not do, or what we have done”, is taught primarily by BYU professors like Stephen Robinson and Robert Millet, who are essentially trying to refute what the LDS prophets and apostles have been teaching for decades, albeit without explicitly calling attention to the errors of specific leaders.

Should we stop openly and actively evangelizing Mormons, who generally hold to traditional Mormon positions, simply because minority positions exist among Mormons that are less heretical? Should we stop warning people about the errors of Mormonism, simply because a portion of them are less erroneous than the teachings of the traditional, institutional, and mainstream elements of the religion? Absolutely not.

Portraying Mormonism in the best possible light — using almost exclusively the lens of LDS neo-orthodoxy — will win one more LDS fans, but it doesn’t help provide clarity and appropriate urgency that is fitting for those advancing the kingdom of God.

Grace and peace in Jesus,