Posted on October 4, 2012 by Aaron Shafovaloff 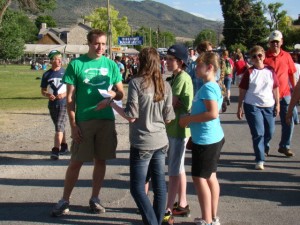 This year at Manti I talked to many roaming Mormon pre-seminary youth (around 10, 11, 12-years-old), and it became very clear to me that they don’t really pick up on distinctive Mormon theology on the nature and history of God and becoming Gods until seminary. There was a very clear general (but not exclusive) pattern to me:

Those who had yet to go through seminary believed God never sinned, that God had always been God, and that we cannot be Gods.

Those who had been through seminary believed that yes, maybe God did sin, that God was once not God, and that we can become Gods. One older Mormon communicated to me that children are naive in thinking that their Heavenly Parents have always been sinless, and that part of the maturation process is learning that they were in fact once maybe sinners like us. When these post-seminary Mormons would respond to the issue of whether God sinned by saying that the issue is complex and that we can’t really know with certainty, I would refer them back to the more pure and lovely testimony of LDS pre-seminary youth, who seem to be spiritually smarter than LDS adults.

I did a lot of prepping of LDS youth: I would share with them the verses from the Bible (and even the Book of Mormon) showing that God has always been God, and holy, and I would ask them what they ought to do if their future seminary teacher ever teaches them (as so many older LDS youth tell me) Lorenzo Snow couplet theology, etc., and their responses were great.

One LDS boy told me, “I will correct them!” And his sister then chimed in, “Yeah, there’s nothing in the scriptures that says we can’t correct our teachers!”

This is my message to such LDS youth: Read your Bibles, and don’t let the LDS Church take away from you the beautiful belief that God never sinned, that he is the first God, that he has always been fully God, and that we cannot become Gods.

This entry was posted in Nature of God. Bookmark the permalink.