Posted on November 15, 2012 by Sharon Lindbloom

The September/October 2012 issue of Stand To Reason’s newsletter, Solid Ground, focuses on this question: Is Mormonism just another Christian denomination? In the author’s forward, Greg Koukl explains,

“In this month’s Solid Ground, I do what the LDS is failing to do. My aim is ‘simply to educate’ on some of the foundational differences between classical Christianity—the Christianity of the last 2000 years—and the Mormon church.

“In this article, I’m not asking if Mormonism is true. I’m only trying to determine if it’s Christian in the classical sense of the term. That’s all. Let’s get the facts clear.”

As one might imagine, the article takes a good look at theological issues. Mr. Koukl writes,

“The Mormon Godhead consists of ‘three beings’ who each ‘possess all of the attributes of godliness in perfection,’ that are ‘a divine community’ sharing ‘no mystical union of substance.’ Instead, they ‘are as distinct in their persons and individualities as are any three persons in mortality.’ (263-264)

“[This] is an explicit affirmation of polytheism. Note, ‘God the first…God the second…and God the third’ are ‘separate and distinct beings.’

“To be fair, Mormonism denies this charge: ‘The LDS belief in… three beings within the Godhead… is not to say that we are polytheistic.’ (263) However, also to be fair, this assertion is hard to take seriously.” 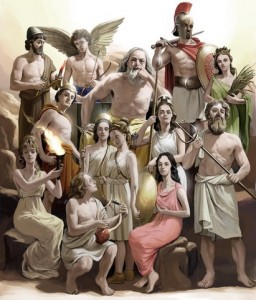 Noting that there is nothing ambiguous about the word polytheism, Solid Ground defines it for readers: “from poly- (many) and theos (god)—is the belief in or worship of more than one god.” Yet Mormons insist that Mormonism is not polytheistic while still holding to a firm belief in (and worship of) more than one God. Mr. Koukl provides his readers with the Mormon explanation on this seeming contradiction that can be found in LDS Beliefs under the heading “Monotheism”:

Mr. Koukl urges his readers to “note the qualification” the Mormon authors use in their explanation: “Mormonism is ‘monotheistic’ in the sense that three distinct Gods comprise what was earlier referred to as one ‘divine community.’”

A theology that includes a plurality of Gods is foundational in Mormonism. Joseph Smith taught,

“I wish to declare I have always and in all congregations when I have preached on the subject of the Deity, it has been the plurality of Gods… [Father, Son and Holy Ghost] constitute three distinct personages and three Gods.” (History of the Church 6:474).

“How many Gods there are, I do not know. But there never was a time when there were not Gods…” (Journal of Discourses 7:333).

“Three separate personages — Father, Son, and Holy Ghost — comprise the Godhead. As each of these persons is a God, it is evident, from this standpoint alone, that a plurality of Gods exists. To us, speaking in the proper finite sense, these three are the only Gods we worship. But in addition there is an infinite number of holy personages, drawn from worlds without number, who have passed on to exaltation and are thus gods” (Mormon Doctrine, 576-577).

“A belief in multiple, distinct gods is polytheistic, even if the LDS refuses to call it that. Religious groups are free to define their own beliefs. They are not free to redefine the English language.”

Sixteen years ago when interviewed by the San Francisco Chronicle, BYU professor (emeritus) Truman Madsen was refreshingly candid on the subject:

Yes, Dr. Madsen, that is polytheism. Mormonism is a polytheistic religion and is therefore theologically inconsistent with classical Christianity.

151 Responses to Mormonism and Polytheism