Posted on December 20, 2012 by Sharon Lindbloom

[Tess, quoting from “Redefining the Virgin Birth: Mormonism on the Natural Conception of Jesus” by McKeever and Shafovaloff]:

“When one considers that Mormonism teaches that every human born on earth is a literal spirit child of God, the concept that Jesus was conceived in a natural manner becomes even more blasphemous. Why? Because it means the Jesus of Mormonism was conceived in an incestuous union between Heavenly Father and his spirit-daughter Mary.”

Don’t Mormons believe that we are all brothers and sisters? Making every union incestuous? I don’t see this as a valid point in any way, seeing that every single union is “within the family.” Also, be weary to judge incest. Look at Adam’s family. Modern minds see incest much differently than they would have in the beginning of life on earth.

This is also a little mind-twisting. No belief in the trinity=no problem here. If God the Father has a resurrected, perfect body of flesh and bone, He is already “man”? Jesus the Christ was be 100% man, 100% God. That is what made Him so remarkable…

We believe that Mary was actually taken up, rather than Heavenly Father coming down to the earth, but no mortal, unclean human being can be in the sight of God so the Holy Ghost comes upon Mary so that she can conceive Christ. Based on my study of Mormon doctrine and theology, I would say that, yes, Heavenly Father had sexual intercourse with Mary. Does this rattle my faith? Not at all. My belief in Jesus being the only begotten Son of God in the flesh (as opposed to Adam and Eve, who were begotten obviously, but not in the flesh because they were not “subject to mortality”- which is the definition of in the flesh) depends on my belief that Jesus did not just poof into Mary’s uterus.

Thank you for taking the time to email Mormonism Research Ministry and sharing your perspective on issues surrounding the LDS view of the Virgin Birth of Christ.

I was a bit surprised at your argument against the impropriety of incest between God the Father and His literal daughter, Mary. As I understand it, you are saying that since all human sexual relations are incestuous (according to the logical conclusion inherent in Mormon doctrine), it is not a problem (not “blasphemous”) for Heavenly Father to have had sexual intercourse with His daughter. I think you are missing the main point.

The article you are referring to is a discussion about the way Mormonism has “redefined” the Christian doctrine of Christ’s Virgin Birth. The article is not examining the Mormon view of human sexuality nor is it written from an LDS perspective. It is written from the Christian (and biblical) perspective which finds the Mormon doctrine of God the Father engaged in an incestuous sexual relationship with His daughter to be “blasphemous.” The Bible specifically calls out the sin of various incestuous relationships (as well as sexual aberrations) in Leviticus 20, using descriptive words like “perversion,” “abomination,” “depravity,” “disgrace,” “iniquity,” “impurity,” and “sin.” Therefore, from a Christian perspective, the nature of this “incestuous union” is a valid point.

You also took issue with the statement in the MRM article that said, “The problem with Mormonism saying that God had sex with Mary is that it comes from a worldview that says divinity isn’t so different from humanity. The whole point of the virgin conception is that it is the event where God added an entirely different nature to himself: humanity. God became a man. The ironic, pagan heresy of Mormonism’s suggestion that God had sex with Mary is that it collapses the God/man divide and reverses the larger narrative: man became a God.” Again, I would remind you that the author is discussing the doctrines that make Mormonism’s teaching on the Virgin Birth different from that of Christianity; he’s not presenting a formal argument against Mormon teachings.

Having said that, your perspective on this, as I understand it, is that if one doesn’t believe in a God in Trinity the above point is baseless. I am unable to see how this is so; I don’t see a trinitarian necessity (or point) in what is written here. The author is noting that the classic Christian doctrine of the transcendency of God is absent in Mormonism. According to Mormon doctrine, man and God are of the same species: man is “a god in embryo.” …In Christian belief God is wholly and distinctly separate from creation (which includes man). He is not a man that became a God who then impregnated his daughter to become the father of a “demigod” in the flesh [see Bruce McConkie, Mormon Doctrine, “Demigod”]… Thus, as the author noted above, the Mormon view “collapses the God/man divide.”

Thank you for giving me the opportunity to clarify MRM’s article on the Virgin Birth. And thank you again for taking the time to share your thoughts. 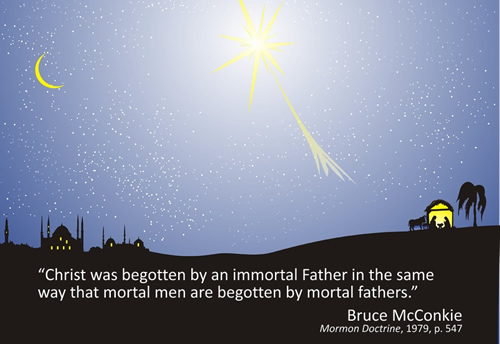 Mormon Coffee friends, the conclusion of the MRM article to which Tess’ email referred is also appropriate to note here:

The truth of the virgin birth of Jesus Christ as understood by Christians for two millenia is far too precious… We encourage Christians to lovingly question and challenge their Mormon neighbors over this issue. True repentance demands that a person be willing to embrace the Jesus Christ who was truly born of a virgin.

The supernatural birth of Jesus Christ identifies him as the Messiah, God’s only son. Jesus Christ is Lord. He commands everyone to repent and trust him for the free gift of eternal life and forgiveness of sins. Everyone who calls upon his name will be saved.

I pray that this message finds you well this holiday season, and I wish you a Merry Christmas!

Sharon surrendered her life to the Lord Jesus Christ in 1979. Deeply passionate about Truth, Sharon loves serving as a full-time volunteer research associate with Mormonism Research Ministry. Sharon and her husband live in Minnesota.
View all posts by Sharon Lindbloom →
This entry was posted in Virgin birth and tagged Virgin birth. Bookmark the permalink.