Can the missionaries really help you? 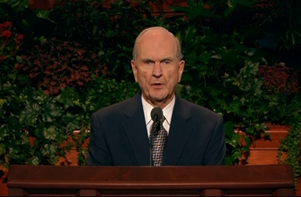 In the last General Conference, Apostle Russell M. Nelson gave a talk titled “Ask the Missionaries! They Can Help You!” (Apparently there were lots of exclamation points in this talk!!!)

Earlier on the first day of the conference, President Thomas S. Monson had explained that 18-year-old males and 19-year-old females were now qualified to become missionaries (instead of 19 and 21). The news was very exciting for many Mormons, as the number of applications went up by 471% within just a few weeks. It will not be surprising to me if the church has 100,000 missionaries by next year, especially since so many more females are applying.

Nelson said that “missionaries can help in many ways.” First of all, he said, they can help those who want to do genealogical work. Honestly, I doubt many of the teenaged missionaries have ever looked up their family records. Yes, their parents and grandparents, maybe, but how many 18-year-old boys know much about a science that is largely learned through experience?

Next, Nelson said the missionaries can help members who are not presently participating in church functions. Perhaps with so many missionaries, the teenagers can go around to the less active members’ homes and ring the doorbell a few minutes before the church service to make sure they get there on time. Really, though, can most of these teens know what it’s like to doubt whether “The Church” is true? Most of them have merely parroted their parents’ faith, probably attending seminary classes and going with the flow. Now that the boys will move straight from high school to the mission field, they may have very little time to think through their faith and see if it’s true.

Recently a pair of missionaries came to my house. One was 21 who grew up in the Mormon Church. He became a missionary because, finally, he received a testimony about the church just a few months before. (I wonder if this was not more of an issue that he couldn’t get any dates with nice Mormon girls.) Off, then, he went to the MTC. The other was 19, a more traditional missionary. Neither had any kind of exposure to Evangelical Christianity. By moving the age requirement down, it will be interesting to see the impact upon these younger men and women, some of whom will be seriously challenged in their faith for the first time at a younger age.

A third benefit to talking to the missionaries, Nelson said, is that “some of you may want to know how to conquer an addiction or live longer and enjoy better health.” How many teenagers have conquered an addiction? Honestly, I’ve never met a missionary who I thought had ever imbibed or inhaled, let alone had an addiction. Their lack of experience in these types of matters does not make them experts in conquering addictions. As far as better health, was Nelson serious? I’ve seen the missionaries stuffing themselves at Golden Corral or getting another soda at the fountain at McDonalds. I hear that they eat plenty of Top Ramen and Mac and Cheese during their missions. These are teen-agers, for Pete’s sake! How are they going to teach me how to live longer?

Fourth, if “you feel a gnawing emptiness, without direction or purpose,” Nelson promised that the missionaries can help. Unfortunately, the missionaries have very little practical spiritual experience besides their own faith. Most can’t tell me the different between the Qu’ran and the Tripitaka. They have never looked into Zen or know the fundamentals of Evangelical Christianity. All they know is what they have experienced, which for most of them is TBM (True Blue Mormonism). They know the standard lines (i.e. Joseph Smith was a true prophet, the Book of Mormon is true, Thomas S. Monson is true, and yes, anything connected to Mormonism is true), but they really don’t know why. Their critical thinking skills are not fully functional yet. How do they really know if what they are believing is true? The pat answer: “I have prayed about it and know it is true.” This just isn’t good enough.

Nelson continued, saying that the missionaries can also help if “you have concerns about your family” by helping with the “strengthening of marriages and families.” However, these young men and women have never been married. How are they qualified to somehow become marriage/family counselors? According to Nelson, they “can also help you with your desire for greater knowledge.” But most missionaries have had no more than a year of college, and as I mentioned before, soon the missionaries will be knocking on our doors right out of high school. I have taught high schoolers, and while many of them are bright, their knowledge is not necessarily higher than those whose doors they are knocking on.

Finally, Nelson said that in a recent study “Latter-day Saints were the most knowledgeable about Christianity and the Bible.” Why is it, then, that missionaries with whom I converse have no idea about the passages in the Bible that say there is only one God? That they think the Trinity means one God in three gods? That they have the idea that salvation by grace is nothing more than resurrection from the dead? That they think the Bible is filled with many contradictions and errors? Honestly, I doubt many of them have ever studied the Bible except for passages that were required reading in seminary and missionary training.

No, Mr. Nelson, the missionaries are of little service to those who have studied their Bibles. My only hope with lowering the age of the missionaries is that I might get more visits from them. Maybe I could help them!

111 Responses to Can the missionaries really help you?