Mormonism and the heresy of the Anthropomorphites 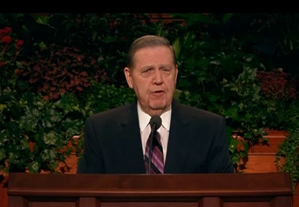 Back in 2007 Mormon Apostle Jeffrey Holland gave a talk at General Conference titled, “The Only True God and Jesus Christ Whom He Hath Sent.” In this address, Mr. Holland denounced the Christian doctrine of the Trinity in what some have called a “demeaning and misleading” way. Because the new Mormon Church curriculum for youth, “Come Follow Me,” directs students to Mr. Holland’s talk as part of one lesson (“What do we know about the nature of the Godhead?”), I recently re-read Mr. Holland’s remarks. My curiosity was piqued when he quoted a fourth-century monk. After mentioning the formulation of early Christian creeds, Mr. Holland said that the creeds

“declared the Father, Son, and Holy Ghost to be abstract, absolute, transcendent, immanent, consubstantial, coeternal, and unknowable, without body, parts, or passions and dwelling outside space and time. In such creeds all three members are separate persons, but they are a single being, the oft-noted ‘mystery of the trinity.’ They are three distinct persons, yet not three Gods but one. All three persons are incomprehensible, yet it is one God who is incomprehensible.

“We agree with our critics on at least that point—that such a formulation for divinity is truly incomprehensible. With such a confusing definition of God being imposed upon the church, little wonder that a fourth-century monk cried out, ‘Woe is me! They have taken my God away from me, … and I know not whom to adore or to address.’” (Ensign, October 2007. Ellipsis in the original)

Since Mr. Holland helpfully provided a reference for the quoted monk (Owen Chadwick, Western Asceticism, 1958, 235) I found the source and read the fuller account of Egyptian monk Sarapion “who had for many years lived a life of strict discipline and had achieved the leading of a truly good life” (ibid., 234). As it turns out, Serapion was not lamenting the incomprehension of the Trinity (as Mr. Holland implied) when he cried, “Woe is me!”

Owen Chadwick’s book includes lengthy sections from a work by John Cassian (ca. 360-435), “The Conferences of Cassian.” This is how Cassian tells the story that Mr. Holland referenced:

“A few days after the first conference with Abba Isaac, arrived the customary festal letter from Bishop Theophilus of Alexandria [in the year 399]. Besides declaring the date of Easter, he included in the letter a long refutation of the absurd heresy of the Anthropomorphites. Nearly all the monks in Egypt, being uneducated and therefore holding wrong ideas, received this with bitterness and hostility: and a large majority of elders from all the ascetic brotherhood decreed that the bishop was guilty of a grave and hateful heresy, because (by denying that Almighty God was formed in the fashion of a man, when Scripture bears clear witness that Adam was created in his image) he seemed to be attacking the text of Holy Scripture. Even the hermits in the desert of Scete, who were more educated and more spiritually advanced than any other Egyptian monks, rejected the letter of Theophilus. The priests who were presiding over three of the four churches in Scete would not allow the letter to be read at their meetings: and the only exception was Abba Paphnutius, who was the priest of my own congregation.

“Among those caught by the error was a monk named Sarapion, who had for many years lived a life of strict discipline and had achieved the leading of a truly good life. Almost first among monks in merit and in years in the desert, equally he was almost first in his ignorant prejudice against orthodox believers. The saintly priest, Paphnutius, used many exhortations to bring him back to the true belief, but unsuccessfully. To Sarapion the view seemed a novelty, not found in tradition.

“It chanced that a deacon of great learning, named Photinus, arrived from Cappadocia with the object of visiting the brothers in Scete. Paphnutius gave him a warm welcome. And to support the doctrine contained in the letter of Bishop Theophilus, he led Photinus into the middle of the congregation, and in the presence of all the brothers, asked how the Catholic [i.e., “universal” or “general.” See note at the end of this post] Churches of the East understood the text in Genesis: ‘Let us make man after our image and likeness [Gen. 1:26].’ Photinus explained how all the leaders of the churches understood the text spiritually, not literally or crudely, and made a long speech adducing numerous proofs from Scripture. ‘That unmeasurable, incomprehensible, invisible majesty cannot be limited by a human frame or likeness. His nature is incorporeal, uncompounded, simple, and cannot be seen by human eyes nor conceived adequately by a human mind.’

“At last old Sarapion was moved by the numerous and convincing assertions of this learned man, and consented to the traditional faith of Catholics [i.e., “universal” or “general”]. Abba Paphnutius and the rest of us felt great joy at his assent; joy that the Lord had not allowed a man of such age and goodness, who had erred in simple ignorance, to end his days unorthodox in the faith.

“When we stood up to give thanks to the Lord in prayer, the old man felt mentally bewildered at having to pray, because he could no longer sense in his heart the Anthropomorphic image of the God which he had always before his mind’s eye when praying. Suddenly he broke into bitter weeping and sobbing, and throwing himself prostrate on the ground with groans, cried, ‘Woe is me! They have taken my God away from me, and I have none to grasp, and I know not whom to adore or to address.’” (234-235) 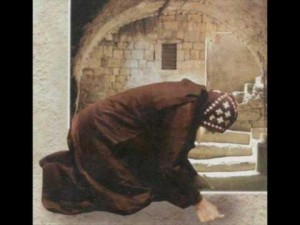 So with the change in Sarapion’s understanding of the true nature of God, brought on by a clear understanding of Scripture, came a necessary change in the way the man was accustomed to praying. He knew that directing his prayers to an image in the form of a man, as he had always done, was not right; he wasn’t sure how to pray now that he had no image of flesh and bone in his mind.

John Cassian was deeply moved by this whole scene. When he returned to Abba Isaac he asked for an explanation of how someone so devoted as Sarapion could be “misled by skillful demons” and fall into such grave doctrinal error. Isaac responded,

“It is not surprising that a very simple man who had never received any instruction on the being and nature of God could be caught and deceived, even until now, by an error which he mis-learnt a long time ago. This error is not, as you suppose, a modern illusion of demons, but an inheritance from the ignorance of the old heathen. They used customarily and erroneously to worship demons fashioned in the likeness of men, and even now they think to worship God in his majesty – the incomprehensible and indescribable – in the limited form of some statue. And they suppose they have nothing to worship unless they have in front of them a statue, which they can continually address in their devotions, can mentally conceive, and can keep in front of their eyes. Against this error is directed the text, ‘And they changed the glory of the incorruptible God into the likeness of the image of corruptible man [Rom. 1:23].’ And Jeremiah says: ‘My people have changed their glory for an idol. [Jer. 2:11].’

“This is the way in which this error has been implanted in some men. Nevertheless, in people whose souls have never been polluted by heathenism, the error is contracted by ignorance, under the cover of this text: ‘Let us make man in our image and in our likeness.’ Hence, the so-called Anthropomorphic heresy has risen out of the detestable interpretation of this text, a heresy which maintains obstinately and perversely that the limitless and simple nature of God is fashioned in human form and features. Anyone well-instructed in Catholic [i.e., “universal” or “general”] doctrine will detest the idea as heathen blasphemy: and in detesting it he will come to that pure state of prayer where the person will allow (I need not say) no effigy of God to be mingled in his prayers…” (235-236)

By God’s grace, Sarapion abandoned the heresy of worshiping an idol, a god made in the image of man, a god much like the god Mr. Holland proclaims. Would that Mr. Holland himself would break into bitter weeping and sobbing at the realization of the heresy he’s embraced, throw himself prostrate on the ground with groans, and cry out, “Woe is me! They have taken my false god away from me, and I have none to grasp, and I know not whom to adore or to address.” I hope this for Mr. Holland because anyone who abandons his idols and seeks the one true God will find Him.

The appearance of the word “Catholic” in Cassian’s work does not refer to the Roman Catholic Church (which did not yet exist during Cassian’s lifetime), but rather to the entirety of Christianity — the universal church.

Sharon surrendered her life to the Lord Jesus Christ in 1979. Deeply passionate about Truth, Sharon loves serving as a full-time volunteer research associate with Mormonism Research Ministry. Sharon and her husband live in Minnesota.
View all posts by Sharon Lindbloom →
This entry was posted in General Conference, God the Father, Nature of God and tagged False doctrine, Jeffrey Holland, John Cassian, Nature of God, Trinity. Bookmark the permalink.

75 Responses to Mormonism and the heresy of the Anthropomorphites