In Mormonism God is a Saved Soul 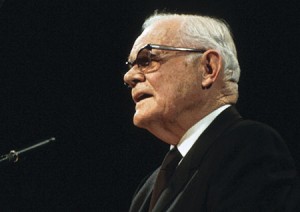 In the 1974 October General Conference of the Mormon Church Marion G. Romney (Second Counselor in the First Presidency) said,

“The Church of Jesus Christ of Latter-day Saints affirms as its Third Article of Faith:

‘We believe that through the Atonement of Christ, all mankind may be saved, by obedience to the laws and ordinances of the Gospel.’ [A of F 1:3]

“In these remarks I shall set forth some views of the church of Jesus Christ on this subject.

“Saved as here used means resurrected and returned as a sanctified, celestialized, immortal soul to the presence and society of God, there to pursue an endless course of eternal progress.

“To get a glimpse of what this means requires a knowledge of the form and nature of God and of man and their relationship to each other.

“Man is a soul, that is, a dual being, a spirit person clothed in a tangible body of flesh and bones. God is a perfected, saved soul enjoying eternal life. He is both immortal and exalted to the highest glory. He is enjoying that blessed condition which men may attain to by obedience to the laws and ordinances of the gospel. (“How Men Are Saved,” Ensign, November 1974)

Broken down, then, what Mr. Romney taught about God is this:

Because God is saved (per Mr. Romney’s stated definition),

Therefore, in Mormonism, God the Father was “saved,” that is, “resurrected and returned” to the presence of God with several new attributes, including sanctification. Bruce McConkie defines sanctification:

“To be sanctified is to become clean, pure, and spotless; to be free from the blood and sins of the world; … a state attained only by conformity to the laws and ordinances of the gospel. The plan of salvation is the system and means provided whereby men may sanctify their souls and thereby become worthy of a celestial inheritance.” (Mormon Doctrine, “Sanctification,” 675)

Is this what Mr. Romney intended to teach the Mormon membership about the LDS view of the nature of God? Whether that was his intent or not, it seems that this is actually what many Mormons believe about Heavenly Father – that he was, perhaps, once a sinner.

Sharon surrendered her life to the Lord Jesus Christ in 1979. Deeply passionate about Truth, Sharon loves serving as a full-time volunteer research associate with Mormonism Research Ministry. Sharon and her husband live in Minnesota.
View all posts by Sharon Lindbloom →
This entry was posted in General Conference, God the Father, Nature of God, Nature of Man and tagged God Never Sinned, Marion G. Romney, Nature of God. Bookmark the permalink.

85 Responses to In Mormonism God is a Saved Soul