Over the past few months, there have been essays published on LDS.org concerning the First Vision, Race and the Priesthood, plural marriage, the Book of Mormon translation, and Becoming Like God. Now, in a paper that appears to top the others, the sixth essay was published yesterday that is causing shock waves around the world. Titled “Distancing the Church from Joseph Smith,” church authorities  indicate that the LDS Church wants nothing more to do with the legacy of Joseph Smith.

According to the article:

“Joseph Smith was a farm boy with a fifth grade education. While he certainly was gifted in many ways by God, it has never been claimed that Smith was responsible for ending the Great Apostasy that started in the third century. In fact, there could have been no such event as a ‘great’ apostasy if the apostle John and the Three Nephites are still alive and never lost their priesthood. Thus, while Joseph was indeed responsible for starting the Church of Jesus Christ of Latter-day Saints, some of our people place too much emphasis upon this man who is just like you and me, a human with many frailties just like ours.”

Dieter F. Uchtdorf, a member of the First Presidency, likened the move to his days as a pilot for a German airline. He claimed that “just as I flew for many years, Joseph Smith is like an eagle soaring above the plains. He’s a good eagle, no doubt, but to give too much prominence to one man would be irresponsible since our church is centered on Jesus Christ. Just consider the name of our church and you’ll know what I mean.”

Among other issues, the article cited Smith’s polygamous ways with 34 women as “irresponsible, especially when it is considered that a third of his wives were teenagers and another third married to other men’s wives.” Also specifically cited as “blasphemous” was Smith’s infamous “King Follett Discourse,” a speech given by Smith claiming that people could become gods.

As far as the death of Joseph Smith, the article states that Smith did not die as a martyr.  It admitted that because Joseph Smith had a smuggled gun and used it to shoot several of his attackers, the title “martyr” is not an appropriate description. The article stated,

“It is not true that Joseph ever said that he was like a lamb led to the slaughter. Instead, what he said was ‘I am thirsty like a ram led to the water.’ Apparently George G. Watt, the stenographer who later compiled the Journal of Discourses, had a head cold that day and did not fully understand what Smith was trying to say.” 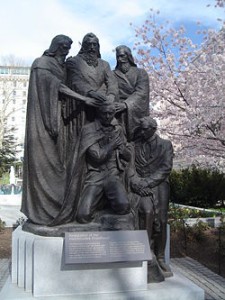 Probably most shocking of all is that statues of Joseph Smith as well as his brother Hyrum will be immediately removed from Salt Lake City’s Temple Square area. No indication was given about what would replace these statues.

It’s one thing for the church to lay the blame for the banning of blacks at the feet of Brigham Young or to admit that “some” plural marriages in the LDS Church continued after the Manifesto of 1890. But this move to relegate Joseph Smith to nothing more than a person who spoke his personal opinion seems to be a step unexpected by everyone, including LDS Church president Thomas S. Monson.

President Monson, who made a guest appearance on NBC’s “Nightline with Hugh Downs” and was quoted in the Salt Lake Tribune (“LDS President unclear about the legacy of Smith,” Salt Lake Tribune, 3/31/14), said,

We’ll keep our ears to the ground and inform you of any updates. Until then, Happy April Fools Day!