Posted on November 13, 2014 by Sharon Lindbloom 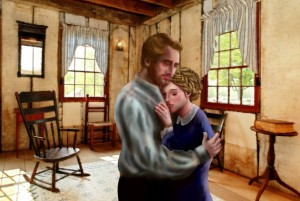 It’s all over the news. The Mormon Church has finally “admitted” long-buried facts about Joseph Smith’s polygamy. The new Church essays were actually posted at lds.org sometime around October 22nd (2014), but for some reason the news only hit the big-time mainstream media this week. Once the New York Times picked up the story, many major news outlets jumped on the bandwagon.

MRM’s Viewpoint on Mormonism radio show is currently airing a 12-part series in which Eric Johnson and Bill McKeever discuss the information included – and left out of — these newsworthy “official” essays on Mormon polygamy.

Reactions to the essays have been interesting and varied. Mormon blogger Jana Riess noted,

“ ‘These statements contained some bombshells about Mormonism’s past that will not be news to most students of history but may indeed prove disturbing for some rank-and-file Latter-day Saints.”

Even so, for Dr. Riess the “provisional, hesitant language” of the essays (that is, the liberal use of the word “may”) leaves the understanding of Mormon polygamy in the same place that it’s been for a long time; nothing new here.

Kristy Money describes herself as “a Mormon woman who loves the Church.” Nevertheless, as a psychologist with a Ph.D. from Brigham Young University, Dr. Money would like the LDS Church to revise several parts of its essay series in order to prevent “negative consequences” for Mormon teens. For example, she suggests,

“Ideally, please acknowledge that Joseph may have erred in his practice of polygamy…

“Please excise mollifying language for Joseph’s polygamy and his secrecy surrounding the practice. Consider acknowledging that practicing polygamy while releasing ‘carefully worded’ denials that ‘emphasized that the church practiced no marital law other than monogamy’ (i.e. secrecy toward the public and his wife Emma Smith) was a mistake…

“…given the essay’s obedient tone and assertion that Joseph never erred, their quotes [from Joseph’s younger wives that reveal the young women’s initial revulsion and later acceptance of Smith’s proposals] could actually lead to victims [of sexual abuse] resonating with their initial sorrow and hoping to later find similar joy/peace.”

“tackle head-on some of the most problematic aspects of the church’s embrace of what it once called ‘celestial marriage.’ This includes church founder Joseph Smith’s marriages to young women, at least one of whom was 14 (the essays characterize her as just shy of 15); Smith’s marriages to other men’s wives (which the essays contend may not have included sexual relations); Smith’s concealing most of his plural marriages from his civil wife, Emma Hale; Smith’s and the church’s carefully worded denials regarding the practice of polygamy; the church’s ‘civil disobedience’ in performing the illegal marriages; and the church’s clandestine attempts to keep plural marriage alive for a decade or more even after publicly disavowing it in 1890.”

Yet, Mr. Bergera believes the essays still fall short in several areas. One is the failure of the essays to mention “some of the most important scholarship on Mormon polygamy.” Another involves the essays’ use of primary source material that is unavailable to the general public. And finally,

“…the essay on polygamy during Joseph Smith’s lifetime reflects an emerging apologetic argument that seeks to portray Smith as a reluctant polygamist who had to be coerced by an angel into engaging in sexual relations with his plural wives. Such a position misrepresents Smith’s zest for life and self-perception as Heaven’s lawgiver, while imposing on him a particular brand of morality that was foreign to him. ‘That which is wrong under one circumstance, may be, and often is, right under another,’ he taught (History of the church, 5:134). He also stated that there were ‘many things in the Bible which do not, as they now stand, accord with the revelation of the Holy Ghost to me’ (Words of Joseph Smith, p. 211).”

According to the New York Times,

“Kristine Haglund, the editor of Dialogue: A Journal of Mormon Thought, said that while she found the church’s new transparency ‘really hopeful,’ she and other women she had talked with were disturbed that the essays do not address the painful teaching about polygamy in eternity.

“ ‘These are real issues for Mormon women,’ Ms. Haglund said. ‘And because the church has never said definitively that polygamy won’t be practiced in heaven, even very devout and quite conservative women are really troubled by it.’”

CNN journalist Daniel Burke takes a mildly critical tone in his reporting. Mr. Burke notes that “until recently Mormon leaders had taken pains to present its founding prophet as happily married to one woman.” He also points out that, while Joseph Smith saw Mormonism as a restoration of the “ancient principles” of biblical prophets who had multiple wives, “Smith’s first wife [Emma], however, was not amused.” While most news media articles has included the information that Joseph Smith had a wife as young as 14 years old, Mr. Burke is one of the few journalists to mention the Mormon Church’s baffling (my word) defense of this particular marriage:

“ ‘Marriage at such an age, inappropriate by today’s standards, was legal in that era, and some women married in their mid-teens,’ the church said in its online essay.”

I find this defense baffling in that the Mormon Church essay appeals to the legality of a girl in her mid-teens marrying “in that era,” while ignoring the elephant in the room: It was most certainly not legal “in that era” (or any other in America) for a 14-year-old girl to marry a man who had over two dozen additional wives, some of whom had additional husbands as well. I find the Church’s assertion to be a rather strange defense of Joseph Smith’s marriage to a child bride.

At any rate, these are interesting times in the life of the Mormon Church. The New York Times reports that Church historian and leader Steven Snow explains,

“ ‘There is so much out there on the Internet that we felt we owed our members a safe place where they could go to get reliable, faith-promoting information that was true about some of these more difficult aspects of our history.

“ ‘We need to be truthful, and we need to understand our history,’ Elder Snow said. ‘I believe our history is full of stories of faith and devotion and sacrifice, but these people weren’t perfect.’”

Nor are those who are now charged with presenting “faith-promoting information” on Mormonism’s controversial history. One of the Church essays explains that

“rumors prompted members and leaders to issue carefully worded denials that denounced spiritual wifery and polygamy but were silent about what Joseph Smith and others saw as divinely mandated ‘celestial’ plural marriage.”

I believe the Church’s new essays should be approached with thoughtful discernment; “carefully worded denials” coupled with selective “silence” might be regarded just as appropriate today as it was 175 years ago.