A mediator between God and man

The other day I was invited to attend LDS seminary classes at the public high school my youngest daughter attends. Seminary, for those who don’t know, is a four-year program put together by the LDS Church for their high school students. The one-year topics are Old Testament, New Testament, Book of Mormon, and the Doctrine and Covenants (church history), which is this year’s emphasis. 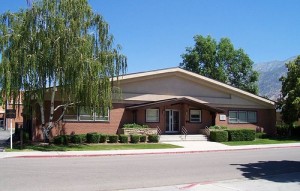 Mormon students throughout the United States typically meet before or after school at the local LDS chapel. In Utah, however, most high schools have a dedicated building located next door for the students to attend during the school day in a program called “release time.” The majority of this school’s student body—of the school’s 1,800 students, 1,000 attend seminary—are enrolled at this seminary, which is located directly behind the school. My middle child who attended a middle school in 9th grade five years ago told me how LDS students publicly bragged about attending these voluntary classes. She said such attitudes served as barriers with other students. Those Latter-day Saints who didn’t attend were shamed; those who weren’t LDS didn’t seem to matter.

A pastor friend and I are trying right now to begin an Evangelical Christian “seminary” class beginning next year. With 17 years of teaching experience, including my service as the Bible department head at a large Southern California Christian high school, we have an idea of what we want to do. Thus, we have been doing research to find out exactly what takes place in these seminary classes. The seminary’s principal and five teachers have been very accommodating. One teacher, whom I now consider a friend, even told me that he would have his 180 students get the word out to their non-LDS friends when our class begins in January. “Anything that leads people to Christ is worth promoting,” he told me. I told him I appreciated the offer; we’ll see where that goes.

As I walked into this teacher’s room during his prep period, I was immediately struck by a large poster on his wall listing the scriptural memory verse for the first quarter, Joseph Smith-History 1:15-20 found in the Pearl of Great Price. Specifically, it deals with the all-important First Vision. Let me quote verses 18-20a to give you an idea of Joseph Smith’s account:

18 My object in going to inquire of the Lord was to know which of all the sects was right, that I might know which to join. No sooner, therefore, did I get possession of myself, so as to be able to speak, than I asked the Personages who stood above me in the light, which of all the sects was right (for at this time it had never entered into my heart that all were wrong)—and which I should join.  19 I was answered that I must join none of them, for they were all wrong; and the Personage who addressed me said that all their creeds were an abomination in his sight; that those professors were all corrupt; that: “they draw near to me with their lips, but their hearts are far from me, they teach for doctrines the commandments of men, having a form of godliness, but they deny the power thereof.”  20 He again forbade me to join with any of them.

An interesting set of verses to memorize, wouldn’t you think? More than half of my daughter’s friends (probably closer to 80%) are going to be reciting these verses in the upcoming weeks. Do the students realize the take-home message? I find this passage a fascinating choice for memorization.

The instructors are given freedom to teach the assigned material, the same across the board for all seminary classes this year. Doing their best to engage the students, the attitude of these five men (professional teachers who are paid a wage by the LDS Church that is equal to their public school counterparts) reminded me why I remained in Christian education for so long.

The lesson for this particular day covered D&C 1, emphasizing the importance of the LDS leadership. In fact, the journal assigned by one teacher asked, “Look around this room and see the different pictures. Who would you choose to eat dinner with and why?” On one wall were the individual photos of the three men comprising the First Presidency as well as the twelve apostles. In addition, pictures of each of the sixteen prophets, beginning with Joseph Smith, were displayed in the back of the room.

When the students were done with the assignment, they were allowed to share their choices with the class. One boy picked Brigham Young, a man he said was vital for the early growth of the church. Another girl chose Gordon B. Hinckley, an obvious pick for someone who was a child at the time when Hinckley was wrapping up his life. Nobody picked Jesus, even though there were two pictures of Him in the room. This would have been my choice, I suppose, if I had been given the assignment. 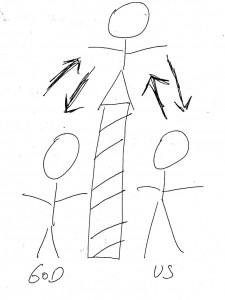 An illustration epitomized for me the difference between Mormonism and Christianity. The teacher drew two stick-people figures on the white board and added a tall wall between them. He explained how human beings were represented by the figure on the right. On the left, he said, stood God the Father. The wall was symbolic of the inability for communication to take place between God and man. My brain’s juices were flowing. Certainly this wall must represent sin! (Rom 3:23; 6:23) Then he drew a third person standing on top of the wall, with arrows pointing up and down to the two lower figures. He said that this figure represented our mediator with God. In my mind, I thought, “What a great illustration! Yes, this is Jesus.” After all, 1 Timothy 2:5 says, “For there is one God and one mediator between God and mankind, the man Christ Jesus.”

Unfortunately, this was not the pick of the seminary teacher. Instead, he explained how this figure represented the prophets…embodied today in the current prophet Thomas S. Monson. What was the take-home message? God has given humanity a living prophet to bridge the gap for humans to have access to God the Father.

On a street outside the Ogden temple last month, a Mormon said I was splitting hairs when I said the beliefs of Mormonism and my Christianity contradicted. They are really the same, I was told. “No ma’am,” I replied, “no hairs are split.” This illustration is the difference between truth and error, orthodoxy and heresy.

114 Responses to A mediator between God and man