As noted in Part 1 of this article (posted earlier this week), on April 25, 2014 Liberty University held a convocation that featured Mormon celebrity Glenn Beck as speaker. Beck told the student body (among other things), 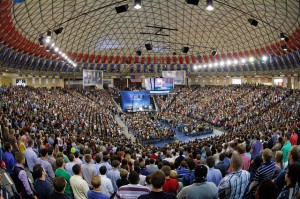 A few hours after Beck spoke, my review of his talk was posted on MRM’s website. When I visited LU a couple of weeks later to attend my daughter’s graduation, I was able to speak with Johnnie Moore, the senior vice-president for communications and the assistant to the president at LU, about my concerns regarding LU placing Glenn Beck in its “pulpit,” as well as Moore’s concerns stemming from my critique. Here I continue what I began in Part 1 of this article: A discussion of Moore’s main objections concerning my critique, followed by my responses.

LU’s reputation should be enough to show that their motives are good. Reputation can only go so far. For those over 40, remember New Coke? It replaced the regular Coke recipe back in the 1980s. This was a marketing nightmare, and within a year “Classic Coke” (containing the old formula) started to hit the shelves. Before long, “New” Coke was history. I worked in a grocery store at that time, and I remember the ridicule Coke received for this bad judgment. Pepsi used its “Pepsi Challenge” to practically double its sales at our store that next year. Yes, public perception is important. On the day before I met with Moore, I spoke to more than a hundred people at a local evangelical Christian church on the topic of Mormonism. Before the service, a man about my age came up to me and, without me bringing up the topic, asked, “Should I send my 16-year-old daughter to Liberty?” Like me, he was bothered about Beck’s on-stage appearance at Liberty University.

At the end of my talk, I took questions from the audience. Guess what the first question was about? Obviously, it was Glenn Beck’s talk at LU. Nobody was prompted. I must add that, while LU did receive a $50,000 gift from Beck’s nonprofit organization, it should be pointed out that this amount doesn’t even pay half the tuition for one student who would attend Liberty for four years. Allowing LU’s reputation to be sullied, possibly causing the school to lose potential students, is a bad move for a university that is very active in recruitment. Even losing 5 or 10 students is a shame and unnecessary! And while Beck’s appearance could keep some from sending their children to Liberty, how many potential students will enroll at LU merely because Beck spoke there? How about none? Liberty officials need to understand that many who belong to their school’s target audience don’t think this is a peripheral or unimportant issue.

LU administrators were surprised that Beck talked about Mormonism. Shouldn’t this alone be enough to tell the school’s leaders that they should avoid inviting someone from another religion to address the student body?  The school doesn’t require its speakers to give details about their content beforehand. Should it be a surprise when a Mormon is allowed to take the stage and then makes it appear that Mormonism is just another “denomination” of Christianity? When I asked if Beck would ever be a speaker at Liberty again, Moore was noncommittal. Has no lesson been learned?

Glenn Beck may be a (closet) Christian.  According to Moore’s email, “many conservative evangelical leaders who are closer to Beck than me have told me that they believe Beck has had a born again experience recently. I do not know his heart but our audience knows that he was speaking only for himself and expressing his personal opinions and beliefs, not those of Liberty University or even of Mormonism generally.”

Moore told us that he has met with Beck behind closed doors and is impressed how (and I quote) “he talks like a Christian.” Should this be a surprise? Of course, Mormons use the same language as Christians. This is the problem in allowing Beck to address the students in the first place! Remember, he is the one in his talk who very clearly stated that he was a Mormon and admitted that his differences would probably go against what most officials at Liberty thought. He is the one who called Joseph Smith a martyr and referenced preexistence. While I certainly hope and pray that Beck eventually becomes a believer in the Christ of the Bible, LU should not have let its guard down by allowing potential confusion to reign in the hearers of his message.

The students at LU are inoculated from Mormonism because they are required to take four religion classes. In the email Moore wrote, “College is about learning.  How can you defend what you believe if you don’t understand what others believe?  I believe our students are stronger in their faith because of our convocation speaker series and the wide diversity of views that they have been privileged to hear in person over the last few decades.”

He also wrote, “Our students are all required to take many credit hours of theology and Bible courses, regardless of their major.  Our students have no question about what Liberty’s doctrinal statement is.  It is posted publicly for all to see. Our doctrinal statement is our public statement on Mormonism.  It is the same statement that Liberty was founded upon and it will never change.”  He added, “As Jerry Falwell, Sr., our founder, often used to say about speakers at Liberty who had different views than him, Liberty students are smart enough to eat the fish and spit out the bones! I believe that’s as true today as it was in his day.”

In other words, because the student body—remember, some are as young as 17—has taken two Bible classes and two theology classes (would you consider four classes “many”?), there is apparently no need to worry about possible cases of students jumping ships. It should be pointed out, though, that the topic of Mormonism is not brought up once in any of those classes. This information comes not only from my daughter but a senior member of the LU Bible department. Bible majors are able to take a class in the cults, but few outside the Bible department ever take the class. Having taught Bible classes at both the high school and college level, I can attest that a total of four classes (with no specific training on LDS doctrine) is inadequate to prevent someone from joining the LDS Church sometime in the future. Besides, I have known folks with  Ph.D.’s who were left confused by the similar-sounding teachings of Mormonism. LU’s thinking on this is, at best, naïve, and at worst, reckless.

There is more that could be said. While this blog will not reach the audience of my original article, I want to reiterate that LU made a terrible mistake by allowing Glenn Beck to speak at convocation, regardless of the school’s defense of this decision. If the school wants to continue allowing nonbelievers to man the stage at convocation, then I recommend that no worship music or prayers are included in these particular services. Why confuse the issue if the intention is for LU students to hear different perspectives? (This is not a bad policy, as long as it’s clear what the purpose of the convocation is.) In addition, I suggest that LU should not require students to attend these particular convocations and thereby not enforce the $10 fine currently assessed  to those who miss.

It’s a shame that there is such controversy at what is, I believe, a fine school that really does have top-notch programs. For the sake of training champions for Christ, please, Liberty officials, consider a change in philosophy.