Is it really a gift?

One of the most remarkable things about the Mormon religion is how its leaders can so badly misinterpret the basic meaning of certain words. Take “gift,” for example. When I think of a “gift,” I think of something given to another at no obligation, even though there still is a cost attached. The payment, however, is made by the giver, not by the receiver. When someone tells me he is picking up the tab for lunch, I receive the lunch gratefully. Yet while it is free to me, the meal cost someone money. 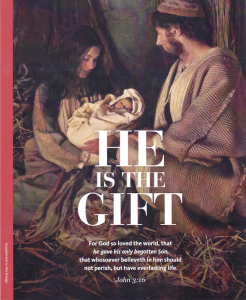 In the back of the December 2014 Ensign is an article titled “Sharing the Gift.” It starts off this way:

“The greatest gift Heavenly Father offers us is eternal life—our life eternally joined with His, living the kind of life He lives (see D&C 14:7). But giving that gift required giving us His Only Begotten Son.” (p. 74)

The line is followed by a quotation of John 3:16, probably the most popular verse used by Evangelical Christians to succinctly explain the Christian gospel. A colorful 4-page cardboard insert titled “He is the Gift” was included in the mailing of this particular issue that features a photograph portraying Joseph, Mary, and the baby Jesus on the front along with a quote from the first part of John 3:16. Nine “pass-along (evangelism) cards” with perforations make up the third and fourth pages. The back of each card reads: “Discover The Gift. Embrace The Gift. #ShareTheGift.” A new LDS website “christmas.mormon.org” is also advertised.

A few years ago Bill McKeever and I produced a December 26th podcast titled “Did You Earn Your Gifts?” I asked Bill what he had done on Christmas. Here was his story: After his family opened presents on Christmas, he said he took all his gifts to his office and scanned in the barcodes with a phone app to find out how much everything cost. He then went back to the living room and distributed cash to everyone—wife, son, daughters, and grandchildren—to repay their generosity. But he wasn’t done. He took out a folder with itemized receipts and gave bills to each member of his family to whom he had given gifts. “They must earn what they were given,” he said. “After all, fair is fair.”

It was done tongue in cheek, but the point was made. Is it possible for a “gift” to come with a price tag? In Mormonism, it does. Consider, for example, D&C 14:7 as quoted in the Ensign article:

“And, if you keep my commandments and endure to the end you shall have eternal life, which gift is the greatest of all the gifts of God.”

What a horrible verse to use in an article titled “Sharing the Gift”! Set up in an “If/Then” construction, this says a person must first keep God’s commandments and even “endure to the end” before it’s possible to receive the gift of eternal life. To use Bill’s illustration, it says, “Sonny, return your present until you’ve paid Grandpa the very last farthing.”

There is nobody who can do everything that the Mormon leadership says must be accomplished. After all, who can keep all the commandments? And is it even possible to “endure to the end”?

Christianity offers so much more. With nothing of worth brought to the table, the sinner comes to Christ bare and naked. Eternal life is available only through God’s grace and not through any good thing that could possibly be accomplished. As Ephesians 2:8-9 says, “For by grace you have been saved through faith. And this is not your own doing; it is the gift of God, not a result of works, so that no one may boast.” I can’t tell you how many times I have heard the Mormon say my interpretation minimizes good works. Au contraire. When a sinner understands his or her situation and is then bestowed with a gift that could never be earned—say, in human terms, $10 million—the natural reaction is to want to do good works (Eph. 2:10). Indeed, as 1 John 4:19 puts it, “We love because He first loved us.”

This season is really all about the Christ child and the gift offered to us, not about what we can do to repay the Savior. As Matthew 1:21 puts it, “She will bear a son, and you shall call his name Jesus, for he will save his people from their sins.” Forgiveness is therefore possible! I cannot tell you how grateful I am that I have Discovered the Gift and indeed Embrace the Gift. And to my Latter-day Saint friends, family, neighbors, and many acquaintances, I hope to ShareTheGift. Great presents come in small packages, even in as small as a manger.

72 Responses to Is it really a gift?