Removing the “doctrine” out of the Doctrine and Covenants

In the “Explanatory Introduction” to the Doctrine and Covenants, the book is described as

“a collection of divine revelations and inspired declarations given for the establishment and regulation of the kingdom of God on the earth in the last days. Although most of the sections are directed to members of The Church of Jesus Christ of Latter-day Saints, the messages, warnings, and exhortations are for the benefit of all mankind, and contain an invitation to all people everywhere to hear the voice of Jesus Christ, speaking to them for their temporal well-being and their everlasting salvation.”

The introduction goes on to say that the Doctrine and Covenants, or D&C,

“is unique because it is not a translation of an ancient document, but is of modern origin and was given of God through his chosen prophets for the restoration of his holy work and the establishment of the kingdom of God on earth in these days.” 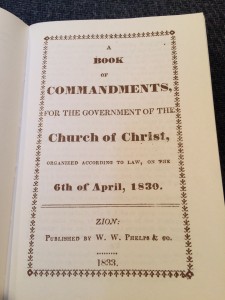 The pre-curser to the D&C is the Book of Commandments. This compilation of alleged revelations to Joseph Smith contained sixty-five chapters and was published in 1833. According to an essay on lds.org,

“To again correct errors, clarify wording, and recognize developments in Church doctrine and organization, Joseph Smith oversaw the editing of the text of some revelations to prepare them for publication in 1835 as the Doctrine and Covenants of the Church of the Latter Day Saints.”

The 1835 D&C was originally broken down into two sections. The preface states that

“the first part of the book will be found to contain a series of Lectures as delivered before a Theological class in this place, and in consequences of their  embracing the important doctrine of salvation, we have arranged them into the following work.”

It goes on to say that

“the second part contains items or principles for the regulation of the church, as taken from the revelations which have been given since its organization, as well as from former ones.”

The introduction to current editions of the D&C notes,

“Beginning with the 1835 edition a series of seven theological lessons was also included; these were titled the Lectures on Faith. These had been prepared for use in the School of the Prophets in Kirtland, Ohio, in 1834-1835. Although profitable for doctrine and instruction, these lectures have been omitted from the Doctrine and Covenants since the 1921 edition because they were not given or presented as revelations to the whole Church.”

This explanation to “decanonize” a portion of scripture doesn’t seem to agree with the description given in History of the Church 2:243ff. Page 243 states that on September 24, 1834, a committee was formed “for the purpose of arranging the items of the doctrine of Jesus Christ for the government of the Church.” The committee included Joseph Smith, Sidney Rigdon, Oliver Cowdery, and Frederick G. Williams.  When they finished the “book according to the instructions given them,” a “general assembly of the Church of Latter-day Saints was held at Kirtland” on August 17, 1835.

During this meeting, Oliver Cowdery “arose and introduced the ‘Book of Doctrine and Covenants of the Church of the Latter-day Saints,’ in behalf of the committee. He was followed by President Rigdon, who explained the manner by which they intended to obtain the voice of the assembly for or against said book.” According to this account, W. W. Phelps “bore record that the book presented to the assembly was true.” Afterwards, President John Whitmer, also “testified that it was true. It also reports that “Elder John Smith, taking the lead of the High Council in Kirtland, bore record that the revelations in said book were true, and that the lectures were judiciously arranged and compiled, and were profitable for doctrine.”

As a result, “the High Council of Kirtland accepted and acknowledged them as the doctrine and covenants of their faith by a unanimous vote.”

History of the Church 2:245-46 also includes the “Testimony of the Twelve Apostles to the Truth of the Book of Doctrine and Covenants” as well as testimony from several other leaders in the church who “bore record of the truth of the book.” The fact that they bore witness to the book’s truthfulness is important since one of the arguments used to justify decanonizing the Lectures is that they were not “revelations.” These testimonies tend to prove that there was no distinction when it came to their approval. 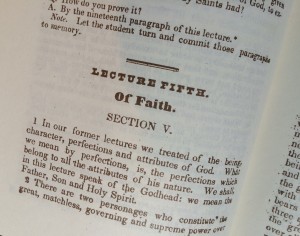 Larry E. Dahl, professor emeritus of Church history and doctrine at Brigham Young University, wrote an essay titled “Authorship and History of the Lectures on Faith.” It gives reasons to believe that the explanation in the current editions of the D&C is not complete.

“Church leaders have acknowledged that the decision to omit the Lectures on Faith in the 1921 edition of the Doctrine and Covenants was based not only on the fact that they are not revelations, but it also had to do with some of the teachings about the Godhead in Lecture 5.”

Lecture 5, or Lecture Fifth as it is now known, is certainly controversial for it states:

“There are two personages who constitute the great, matchless, governing and supreme power over all things… They are the Father and the Son: The Father being a personage of spirit, glory and power: possessing all perfection and fulness: The Son, who was in the bosom of the Father, a personage of tabernacle, made or fashioned like unto man.”

Speaking of Jesus, Lecture Fifth goes on to say,

“And he being the only begotten of the Father, full of grace and truth, and having overcome, received a fulness of the glory of the Father — possessing the same mind with the Father, which is the Holy Spirit.”

In the Question and Answer section of Lecture Fifth, it asks,

“How many personages are there in the Godhead? Two: the Father and the Son.”

“Do the Father and Son possess the same mind? They do. What is this mind? The Holy Spirit.”

Near the end of the Q&A section it asks,

“Does the foregoing account of the Godhead lay a sure foundation for the exercise of faith in him unto life and salvation? It does.”

It is easy to see why this would cause concern for the leaders of the LDS Church. Joseph Smith’s understanding of God had evolved quite considerably over the nine years since the D&C was first published. By the time he died in June 1844, Smith had moved far away from the modalistic dogma of the Book of Mormon. He had abandoned belief in a godhead of two personages while trading a God of spirit for a God of flesh and bones. Mormons today are led to believe that God is only one in purpose and that the Father, Son, and Holy Ghost (Spirit) are three separate deities.

Mormons are taught that their living prophets cannot lead the membership astray. Would this not demonstrate that such a tenet is questionable? What would happen today to a member who insisted vocally that only two personages were in the Godhead and that God was a God of spirit?