In 1844, while the Mormon Church was in the middle of a crisis involving dissention in the Church, The Prophet Joseph Smith preached a Sunday morning sermon in which he exclaimed,

“In all these affidavits, indictments, it is all of the devil—all corruption. Come on! ye prosecutors! ye false swearers! All hell, boil over! Ye burning mountains, roll down your lava! for I will come out on the top at last. I have more to boast of than ever any man had. I am the only man that has ever been able to keep a whole church together since the days of Adam. A large majority of the whole have stood by me. Neither Paul, John, Peter, nor Jesus ever did it. I boast that no man ever did such a work as I. The followers of Jesus ran away from Him; but the Latter-day Saints never ran away from me yet.” (History of the Church 6:408-409)

Due to the blatant arrogance of these words preached by Joseph Smith, this passage from History of the Church has received plenty of attention from critics of Mormonism over the years. We talked about it here on Mormon Coffee a while back. But apart from the boasting and the shocking revelation that Joseph Smith believed he had done “a work” greater than Jesus, I’ve always wondered why Joseph would have made the assertion (about keeping a whole church together) in the first place. 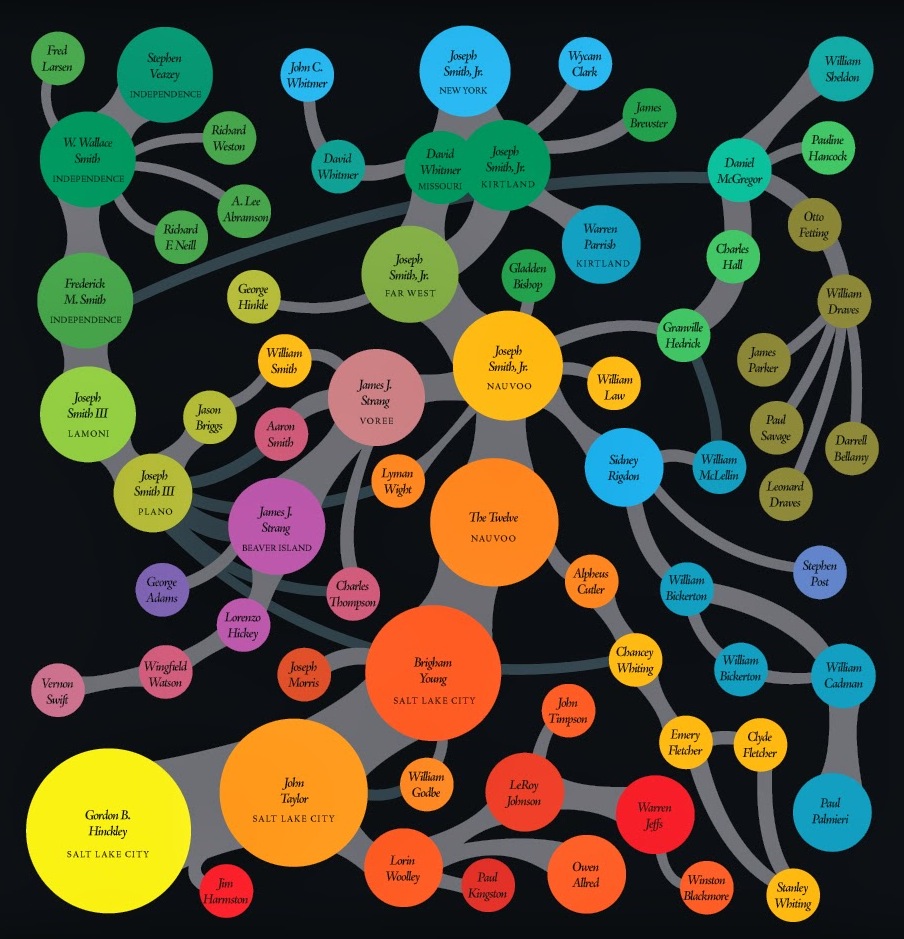 This illustration of the schisms of Mormonism is by John Hamer,
used in the book he co-edited with Newell Bringhurst, Scattering of the Saints.

According to historians Newell G. Bringhurst and John C. Hamer, “Schism has been a persistent theme within Mormonism from its earliest days” (Scattering of the Saints, 1). Bringhurst and Hamer note that this dissent and schism began in 1831 and, by the time of Joseph Smith’s death in 1844, ten new religious groups had formed as a result.

Joseph Smith had lost many of his close associates (including men in Church leadership and many designated witnesses to the Book of Mormon) as they lost faith in the Prophet and began their own “true” churches.

So why did Joseph Smith boast about keeping a whole church together? In thirteen short years his church had broken into almost a dozen pieces.

After the Prophet’s death, when he was no longer here to “keep [the] whole church together,”

“The pace of Mormon schism and fragmentation accelerated… Among the noteworthy Latter Day Saints opposing [Brigham] Young and the Twelve were members of Joseph Smith’s own family, specifically his legal wife Emma, his mother Lucy, and his younger brother William – all of whom eventually joined and/or affiliated with various Midwestern expressions of Mormonism.” (Scattering of the Saints, 5)

The fifteen-plus “important groups” that emerged after Joseph Smith’s death, along with those formed during the Prophet’s lifetime, in turn fragmented into yet more Mormon churches, reaching (cumulatively) well over 400 distinct groups. Based on information from Steven L. Shields, a noted expert on schisms of the Mormon Restoration movement, “as of 2007, the number of distinct Latter Day Saint groups large enough to field an active congregation is estimated to be approximately eighty” (Scattering, 9).

Did Joseph do a greater work than Jesus in keeping a church together? Did “the followers of Jesus [run] away from Him; but the Latter-day Saints never [run] away from [Joseph]”? History proves that Joseph’s was an empty boast. What’s more, it was a foolish boast.

In opposition to Scripture, Joseph Smith boasted in his self-perceived might. And rather than boasting in the Lord, he boasted against the Lord.

Why did he do that?