The Pattern of Mormon Temples 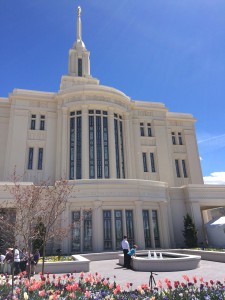 Last week I returned from a visit to Utah. While there, I took a tour of the Mormon Church’s newly completed Payson Temple. As is the normal practice for temple open houses, the tour began with a video about Mormon temples. And as is usual for the temple open house videos, the claim is made that Mormon temples are a restoration of ancient biblical temples. I don’t have an exact quote from the video, but the idea it expressed is reflected in a comment recently made by a Mormon Seventy:

“Temples are patterned after Solomon’s temple and honor the Lord and express our gratitude.” (Kent R. Richards (Director of the LDS Church’s Temple Department), Payson LDS Temple: A Special Edition of the Daily Herald, April 15 2015, 14)

Mr. Richards’ remark is right in line with — or, one might say “patterned after” — information found in an older pamphlet produced by the Mormon Church:

“In Biblical times sacred ordinances were administered in holy edifices for the spiritual salvation of ancient Israel. The buildings thus used were not synagogues, nor any other ordinary places of worship. They were specially constructed for this particular purpose…. Following the pattern of Biblical days, the Lord again in our day has provided these ordinances for all who will believe, and directs that temples be built in which to perform those sacred rites.” (Mark E. Petersen, Why Mormons Build Temples, 3. Ellipses mine)

My tour of the Payson temple took me through many rooms on several floors of a very large building (96,630 square feet). I saw:

This is the floor plan of one floor of a typical Mormon Temple: 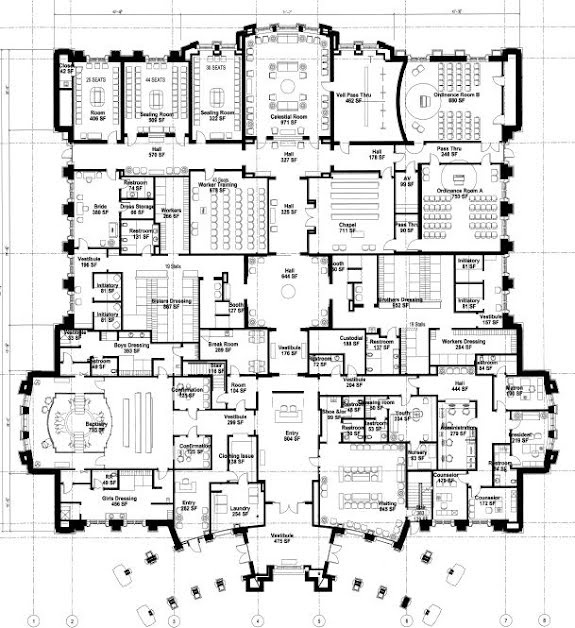 This is the floor plan of Solomon’s Temple as described in the Bible (see 1 Kings 6-7):

The Mormon Church may claim its temples are “patterned after” Solomon’s Temple, but in reality, there is nothing common to both other than the fact that they are both structures that are called “temples.” Neither the buildings themselves, nor those things that take/took place within them correspond to one another. King Solomon explained,

“Behold, I am about to build a house for the name of the LORD my God and dedicate it to him for the burning of incense of sweet spices before him, and for the regular arrangement of the showbread, and for burnt offerings morning and evening, on the Sabbaths and the new moons and the appointed feasts of the LORD our God…” (2 Chronicles 2:4)

Solomon understood that the temple was for a very specific purpose:

“Who am I then, that I should build him an house, save only to burn sacrifice before him?” (2 Chronicles 2:6, KJV)

The biblical temple was for offering sacrifices as temporary atonement for sin. It pointed to Christ as the full, final, and sufficient sacrifice. As Christian theologian John Piper noted,

“But all the Old Testament believers knew that the blood of bulls and goats cannot take away sin (Hebrews 10:4). They pointed beyond themselves to Christ, who was the final sacrifice for sin. Paul said in 1 Corinthians 5:7, ‘Christ, our Passover lamb, has been sacrificed.’ That was the final sacrifice for sin, because it was perfect and sufficient for all who believe. Most clearly of all Hebrews 10:12 says, ‘When Christ had offered for all time a single sacrifice for sins, he sat down at the right hand of God.’ So Christ brought to an end the Old Testament sacrifices for sin. He finished the great work of atonement. His death cannot be improved on. All we have to do now is trust him for that great work. We do not add to it.”

Mormon temples, on the other hand, are built for these purposes:

“These two great purposes – eternal marriage (binding the family for time and eternity), and opening the door of the kingdom for those who have died without an adequate opportunity to accept the [restored] Gospel of Jesus Christ and its essential ordinances [i.e., baptism for the dead, etc.]…

“In addition there is the Temple ‘endowment,’ which is also an ordinance pertaining to man’s eternal journey and limitless possibilities and progress…

The Mormon Church has every right to build temples according to any design and for any purpose it pleases, but here’s the problem. The Church proclaims that Mormon temples are “patterned after” Solomon’s temple, and that Mormon temples are a restoration of ancient biblical temples, built for the performance of biblical ordinances. These assertions are completely untrue. And considering the fact that every detail of the biblical temple is clearly presented in the Bible, the Mormon Church knows its assertions are untrue. Which means the Church is willfully deceiving people about Mormon temples.

And so I believe these temples accomplish the opposite of the claim made by Kent Richards. Mormon temples do not “honor the Lord”; they dishonor the Lord through deception.

30 Responses to The Pattern of Mormon Temples