April Young Bennett needed to renew her temple recommend. Her brother was soon to be married in a Mormon temple and she wanted to be there. 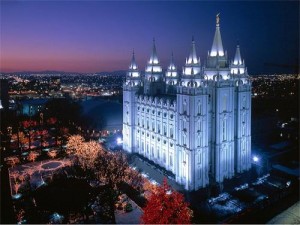 As many of you know, Latter-day Saints who do not hold a current temple recommend are not allowed to enter Mormon temples. They must be “worthy to enter.”

“Once you have some feeling for the value of temple blessings and for the sacredness of the ordinances performed in the temple, you would be hesitant to question the high standards set by the Lord for entrance into the holy temple.

“You must possess a current recommend to be admitted to the temple. This recommend must be signed by the bishop of your ward and the president of your stake…only those who are worthy should go to the temple. The bishop has the responsibility of making inquiries into our personal worthiness. This interview is of great importance to you as a member of the Church, for it is an occasion to explore with an ordained servant of the Lord the pattern of your life. If anything is amiss in your life, the bishop will be able to help you resolve it. Through this procedure, as you counsel with the common judge in Israel, you can declare or can be helped to establish your worthiness to enter the temple with the Lord’s approval.” (LDS Church produced booklet, Preparing to Enter the Holy Temple, 2002)

So Ms. Bennett had the necessary interview with her bishop, who found her worthy to enter the temple.

Ms. Bennett went on to the next step — an interview with her stake president. And this is when the wheels came off the bus.

Ms. Bennett’s stake president, who had “the responsibility of representing the Lord in interviewing” her (ibid.), would not sign her temple recommend.

A recommend interview reportedly consists of 15 questions. Three are questions of faith, and the rest are questions of behavior. Nobody knows Ms. Bennett’s “worthiness” in all of these things, but according to the Salt Lake Tribune, what the stake president deemed a problem was Ms. Bennett’s activity with Ordain Women, a group of Mormons who advocate for inclusion of females in the currently all-male LDS priesthood. The Tribune reported,

“Bennett says her stake president told her that, to keep her recommend, she would have to leave OW’s board…

“Bennett’s LDS stake president, who oversees a several Mormon congregations in the southwest Salt Lake Valley, also insisted that she delete 11 blog posts she had written for Exponent II, she wrote, which has ‘provided a safe forum for Mormon women to share their opinions since 1974.’

“‘Some of the deleted posts literally raised the question of women’s ordination simply by posting an opinion poll question for Exponent readers,’ Bennett wrote, ‘but others, such as “Ordination is the Answer to Correlation,” “Confirming Our Hope: Women and Priesthood,” and “Shouldn’t It Be Obvious? How Women Hold and Exercise the Priesthood Today,” represent months of scripture study and analysis of church history and the teachings of living apostles and auxiliary leaders.’”

Ms. Bennett was given the choice of making herself temple worthy by accepting her stake president’s stipulation, or apparently remaining “unworthy,” thereby missing her brother’s wedding. A hard choice. She wrote,

“I do not believe that temple recommends should be used as leverage to censor ideas or silence advocacy, but if I hadn’t complied, I would have missed my brother’s recent temple wedding. Choosing between following the dictates of my conscience and being present for a family wedding has been heartbreaking. In the end, I concluded that while others may take my place as an author or an advocate, no one can replace me in my role as my brother’s sister.”

Ms. Bennett expressed her hope that Church leadership will one day “respond to the sincere pleas of women with genuine concern, welcoming women’s ideas, requests and suggestions as valuable to the kingdom of God on earth.” She stated that she knows Jesus Christ “does not look upon women who express their desires to participate in his work as nuisances or threats,” yet her stake president, in his ordained capacity of “representing the Lord,” seemed to think otherwise.

“[I]nformal discipline is a public punishment. It is a scarlet A that she will wear every week. It is a way to brand a member as a threat, to tell the people with whom she worships that she is not their sister. Or worse, it is a warning to others that they must remain quiet and distant or they will suffer her same fate.”

A friend of mine described this whole affair as,

“Emotional blackmail, control, and manipulation used by Mormon leaders to close down discussion and a free exchange of thoughts and ideas.”

What strikes me about Ms. Bennett’s experience is the idea of temple worthiness. This is what a temple recommend interview is about, after all, determining someone’s worthiness to enter into and participate in Mormon temple activities “with the Lord’s approval.” Ms. Bennett was deemed not worthy as a vocal author, advocate, and Ordain Women board member. But as a silent supporter of these same ideals, as a silent supporter of the goals of Ordain Women, her stake president says she is temple worthy. It’s interesting to me that temple worthiness has everything to do with outward behavior and nothing to do with the condition of a person’s heart.