Joseph Smith “carried off my daughter” 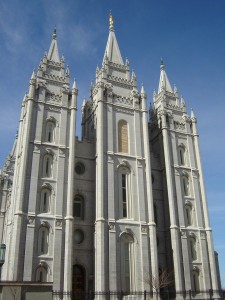 Over the years, much has been written about the heartbreak caused by Mormon weddings. The oft-cited cause of this heartbreak is the sacred, exclusive LDS temple wedding that necessarily excludes “unworthy” friends and family from attending. According to Mormonism, marriages must be performed and sealed in a Mormon temple by the proper priesthood authority so that the families subsequently formed will be together for eternity. Only “worthy” Mormons who hold current temple recommends may enter Mormon temples; therefore, non-Mormons, Mormon children, and “unworthy” Mormons (e.g., those who do not pay a full tithe to the Church) cannot attend the temple weddings of their loved-ones. This policy breaks a lot of hearts.

But there is another heartbreak associated with Mormon weddings that receives far less attention. This is the heartbreak of Christian parents watching a beloved son or daughter abandon the Christian faith of their upbringing to convert to the Mormon faith of a future spouse. I’ve talked with many Christian parents who face this heartbreak with grief filled tears – and eventually, ultimately, with grace born by the hope of Christ’s mercy. 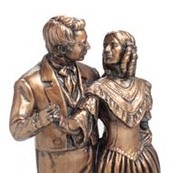 Imagine, then, the heartbreak of Isaac and Elizabeth Hale when they learned that Joseph Smith the “money digger,” after twice being refused their daughter Emma’s hand in marriage, had “carried [her] off” to a different state to marry her against her parents’ wishes.**

Joseph and Emma eloped in January of 1827. Almost seven years later, Emma’s father, Isaac, was still upset over it; he presented his reasons in an affidavit that was printed in the Susquehanna Register on May 1, 1834. What follows is Isaac Hale’s statement, minimally edited for easier reading.

I first became acquainted with Joseph Smith, Jr. in November, 1825. He was at that time in the employ of a set of men who were called “money diggers;” and his occupation was that of seeing, or pretending to see by means of a stone placed in his hat, and his hat closed over his face. In this way he pretended to discover minerals and hidden treasure. His appearance at this time, was that of a careless young man not very well educated, and very saucy and insolent to his father.

Smith, and his father, with several other ‘money diggers’ boarded at my house while they were employed in digging for a mine that they supposed had been opened and worked by the Spaniards, many years since. Young Smith gave the ‘money diggers’ great encouragement, at first, but when they had arrived in digging, to near the place where he had stated an immense treasure would be found — he said the enchantment was so powerful that he could not see. They then became discouraged, and soon after dispersed. This took place about the 17th of November, 1825; and one of the company gave me his note for $12.68 for his board, which is still unpaid.

After these occurrences, young Smith made several visits at my house, and at length asked my consent to his marrying my daughter Emma. This I refused, and gave him my reasons for so doing; some of which were, that he was a stranger, and followed a business that I could not approve; he then left the place. Not long after this, he returned, and while I was absent from home, carried off my daughter, into the state of New York, where they were married without my approbation or consent.

After they had arrived at Palmyra [Manchester] N.Y., Emma wrote to me inquiring whether she could have her property, consisting of clothing, furniture, cows, &c. I replied that her property was safe, and at her disposal. In short time they returned, bringing with them a Peter Ingersoll, and subsequently came to the conclusion that they would move out, and resided upon a place near my residence.

Smith stated to me, that he had given up what he called “glass-looking,” and that he expected to work hard for a living, and was willing to do so. He also made arrangements with my son Alva Hale, to go to Palmyra, and move his (Smith’s) furniture &c. to this place. He then returned to Palmyra, and soon after, Alva, agreeable to the arrangement, went up and returned with Smith and his family.Soon after this, I was informed they had brought a wonderful book of Plates down with them. I was shown a box in which it is said they were contained, which had, to all appearances, been used as a glass box of the common sized window-glass. I was allowed to feel the weight of the box, and they gave me to understand, that the book of plates was then in the box — into which, however, I was not allowed to look.

I inquired of Joseph Smith Jr., who was to be the first who would be allowed to see the Book of Plates? He said it was a young child. After this, I became dissatisfied, and informed him that if there was any thing in my house of that description, which I could not be allowed to see, he must take it away; if he did not, I was determined to see it. After that, the Plates were said to be hid in the woods.

About this time, Martin Harris made his appearance upon the stage; and Smith began to interpret the characters or hieroglyphics which he said were engraven upon the plates, while Harris wrote down the interpretation. It was said, that Harris wrote down one hundred and sixteen pages, and lost them.

Soon after this happened, Martin Harris informed me that he must have a greater witness, and said that he had talked with Joseph about it –Joseph informed him that he could not, or durst not show him the plates, but that he (Joseph) would go into the woods where the Book of Plates was, and that after he came back, Harris should follow his track in the snow, and find the Book, and examine it for himself. Harris informed me afterwards, that he followed Smith’s directions, and could not find the Plates, and was still dissatisfied.

The next day after this happened, I went to the house where Joseph Smith Jr., lived, and where he and Harris were engaged in their translation of the Book. Each of them had a written piece of paper which they were comparing, and some of the words were “my servant seeketh a greater witness, but no greater witness can be given him.” There was also something said about “three that were to see the thing” –meaning I supposed, the Book of Plates, and that “if the three did not go exactly according to orders, the thing would be taken from them.” I enquired whose words they were, and was informed by Joseph or Emma, (I rather think it was the former) that they were the words of Jesus Christ. I told them then, that I considered the whole of it a delusion, and advised them to abandon it. The manner in which he pretended to read and interpret, was the same as when he looked for the money-diggers, with the stone in his hat, and his hat over his face, while the Book of Plates were at the same time in the woods!

Joseph Smith Jr. resided near me for some time after this, and I had a good opportunity of becoming acquainted with him, and somewhat acquainted with his associates, and I conscientiously believe from the facts I have detailed, and from many other circumstances, which I do not deem it necessary to relate, that the whole “Book of Mormon” (so called) is a silly fabrication of falsehood and wickedness, got up for speculation, and with a design to dupe the credulous and unwary –and in order that its fabricators might live upon the spoils of those who swallowed the deception.  ISAAC HALE

CHARLES DIMON, Justice of the Peace.

** Is it true that Joseph and Emma eloped?

“Owing to my continuing to assert that I had seen a vision,” Joseph explained, “persecution still followed me, and my wife’s father’s family were very much opposed to our being married. I was, therefore, under the necessity of taking her elsewhere; so we went and were married at the house of Squire Tarbill, in South Bainbridge, Chenango county, New York. Immediately after my marriage, I left Mr. Stoal’s, and went to my father’s, and farmed with him that season” (Joseph Smith—History 1:58).

13 Responses to Joseph Smith “carried off my daughter”