What Child Is This? The LDS Christmas Story

Posted on December 24, 2015 by Sharon Lindbloom

It was long ago, two thousand years, when sweet baby Jesus was born. Although every baby is cherished by his parents and grandparents and siblings and cousins, this little boy was precious to all the world. The story began in Nazareth…

The Old Testament patriarch Noah, who had died long ago and been resurrected as an angel named Gabriel,1 was sent from God to a city of Galilee, named Nazareth. There he appeared to one of the noblest and greatest of all the spirit offspring of God the Father,2 a young virgin girl whose name–Mary–had been foretold in 124 B.C.3 Mary was betrothed to a man named Joseph, of the house of David.

The angel Gabriel said to Mary, “Hail, you virgin, who are highly favored of the Lord, the Lord is with you: for you are chosen and blessed among women.”4 But Mary was troubled and pondered about this salutation. Gabriel told her not to be afraid; she had found favor with God. He said, “Behold, you will conceive and bear a son,5 and shall call his name, in the ‘pure language,’ Son Ahman.6 He will be great, and will be called the Son of the Highest. And you, Mary, will be the mother of God.”7

Mary said to the angel, “How can this be, since I am a virgin?”

Gabriel answered and said, “The Holy Ghost shall come upon you and sanctify you, and make you holy, and prepare you to endure the presence of ‘the Highest.’8 Then shall your Heavenly Father, who was your literal father in the pre-existence, overshadow you. For you know that He is a Holy Man and Adam is His name. He is our Father and our God, and the only God with whom we have to do. A personage of flesh and bone, He shall beget this Son in the same manner as Cain and Abel and all the other sons and daughters of Adam and Eve were begotten.9 The Christ Child shall be the result of ‘natural action’–flesh and blood, begotten of his Father as we were of our fathers.10 A miracle–though not in violation of natural law–the literal offspring of this ‘celestial Sireship’11 shall be called the ‘Only Begotten Son of God in the flesh.'”12

Mary was concerned because of her betrothal to Joseph. The angel explained, “You and the Father will associate together in the capacity of Husband and Wife; hence, you will be, for at least a time, the lawful wife of God the Father. After He is finished with you, the Father will give you to Joseph. God will be your first husband.13 Then shall it be said, ‘The man Joseph, the husband of Mary, did not, that we know of, have more than one wife, but Mary the wife of Joseph had another husband.'”14

And Mary said, “Behold the handmaid of the Lord; be it done to me according to your word.” And the angel departed from her.

Before Mary and Joseph came together Mary was found to be with child by God the Father. Joseph, not wanting Mary to be disgraced, planned to ‘divorce’ her quietly. But an angel of the Lord appeared to Joseph in a vision15 and said, “Do not be afraid to take Mary as your wife, for that which has been conceived in her, while it was not done without the aid of Man, that Man was God!16 And she will bear a Son; and you shall call His name Jesus, for it is He who will, by his perfect example, show the people how to fulfill the plan of salvation.”17 Now all this took place that what was spoken through the prophet Isaiah might be fulfilled, saying, “Behold, the virgin shall be with child, and shall bear a Son, and they shall call His name Immanuel,” which translated means, “A God with us.”18 The angel said, “Mary will still be called a virgin both before and after she gives birth19 because the Father of her child is immortal.”20 Therefore, Joseph did as the angel of the Lord commanded him.

It came about in those days that Caesar Augustus required a census be taken of all the earth and everyone was proceeding to each their own city to register. Joseph and Mary journeyed together to the land of Jerusalem,21 to the city of Bethlehem, in order to fulfill the requirement.

While they were at Jerusalem, on the 6th day of April,22 it was time for Mary’s baby to be born. She gave birth to her firstborn son, who had been her elder brother in the pre-existence,23 and wrapped him in swaddling clothes, and laid him in a manger; because there was none to give room for them in the inns.24

Now, this was the second birth of Jesus, for He was already the firstborn spirit child of Heavenly Parents.25 He had attained unto the status of Godhood while yet in the premortal existence.26 Whereas, at the time of His mortal birth Jesus was no longer an infant spirit, it was necessary that His spirit be compressed, or diminished in size, so He could be enclosed in His infant body.27 As a result, Jesus forgot everything about His former life.28 Nevertheless, He was the Son of God and the sign which had been promised came to pass: the sun set in America on the night of Christ’s birth, but there was no darkness; it was light as though it was mid-day even until the rising of the sun the next morning.29 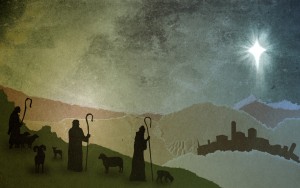 But around Jerusalem/Bethlehem it was dark and there were some shepherds out in the fields keeping night watch over their flock. An angel of the Lord appeared to them causing them to be very frightened. The shepherds desired to determine what manner of being this was, therefore they requested he shake hands. For they knew they would feel the flesh and bone of a true angel’s hand; if they could not feel it they would know he was the devil posing as an angel of light.30 Thereby detecting that this was a messenger from God, the shepherds allowed the angel to proceed.

And the angel said to them, “Do not be afraid; for behold, I bring you good news of great joy which shall be for all the people; for today in the city of David there has been born for you the God of this world.31 He will be called ‘the Prince of Peace, who is also the Prince of Glory and the Prince of Eternal Progress.’32 He will atone for the sins of all mankind in the Garden of Gethsemane,33 and through His gift will come resurrection for the dead for all, and a greater and more enlarged opportunity for eternal life for those who will walk in obedience to His commandments.34 And no one will do a greater work than Jesus until the advent of the Prophet Joseph Smith.35 But take care that you not be led astray. For the time will come when much that is believed and taught about the cleansing power of Christ’s blood will be such utter nonsense and so palpably false that to believe it will be to lose your salvation. In that day many will believe or pretend to believe that if we confess Christ with our lips and avow that we accept Him as our personal Savior, we will thereby be saved. They will say that His blood, without any other act than mere belief, makes us clean.36 Be not deceived. Each of you will have to work very hard to qualify for your eternal potential.”37 Suddenly there appeared a heavenly host of persons who had been resurrected from the dead38 praising God, and saying, “Glory to God in the highest.” And it came to pass when the angels had gone away that the shepherds hastily found their way to Mary and Joseph, and the Christ Child as He lay in the manger. When they had seen this, they made known everything which had been revealed to them about the babe. And all who heard it wondered at the things which were told them by the shepherds.

Dear reader, what child is this?

The LDS Christmas Story was gathered and compiled from the teachings of Mormon Church leaders. It speaks of a Father and Son who are not found in the Biblical narrative of Christ’s birth. It brings the sad news that our salvation depends upon our own righteousness instead of the perfect righteousness of Jesus. The gift God gave that night, according to the LDS Christmas story, provided resurrection to judgement for all the world and an example to follow in order to make oneself worthy of the highest heaven.

Yet God tells a different story. He says it is impossible for us to be worthy of heaven on our own merit; all have sinned and our righteousness is as filthy rags before Him. But the blessed Gift God gave to us on that marvelous holy night was no less than His Promise fulfilled. Jesus Christ–God incarnate–had come, not to show us the way, but to be the Way. He came to a world dead in sin to give us life eternal. Let all who are alive in Christ echo Mary’s song, “My spirit hath rejoiced in God my Savior.”

Thanks be to God for His indescribable gift!

This article originally appeared in the winter 1995 edition of A Word in Season.

10 Responses to What Child Is This? The LDS Christmas Story