Posted on February 24, 2006 by Sharon Lindbloom 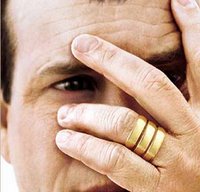 The LDS Church is upset over the new HBO series, Big Love. The TV show, which premiers March 12th, is about a polygamous family living in suburban Salt Lake City. Bill Paxton plays Bill Hendrickson, the husband of three wives; the family is depicted as members of an LDS offshoot group.

The Mormon Church has arranged for “a carefully worded disclaimer at the start of each hour, stressing that plural marriage is strictly outlawed by the Church of Jesus Christ of Latter-day Saints.” Nevertheless, the Church is unhappy about the possible confusion the HBO series may cause among its viewers. As the Denver Post notes,

“The last thing the LDS hierarchy needs is a primetime series featuring a polygamist who considers himself a follower of church founder Joseph Smith.”

But I have to hand it to the show’s producers. The so-called Mormon fundamentalist groups (polygamists) do follow the teachings of Joseph Smith. I applaud the producers’ commitment to tell it like it is in the face of what must be tremendous pressure from the LDS Church.

What I find really interesting about this whole “Mormons are not polygamists” thing is the irony of it.

“The church has rigorously distanced itself from these sects, stressing that these groups are not Mormons, that there is no such thing as ‘Fundamentalist Mormonism,’ that polygamy merits excommunication from the mainstream church… Even calling them offshoots is misleading, [Church spokesman Mike] Otterson says.”

“The divide between mainstream Mormons and those who consider themselves fundamentalists is considerable. Although the [LDS] church shuns the ‘fundamentalist’ term, many remaining polygamists, living in secrecy in ultrareligious sects in the West, describe themselves that way.

“The fundamentalists, [series co-creator Mark] Olsen has said, ‘look at The Church of Latter-Day Saints as sellouts and apostates.'”

Does this ring a bell for anyone? Try on this rewritten statement for size:

Another interesting thing is this. Speaking of the fundamentalists Mike Otterson said:

“They are illegal polygamist groups…”

As were the Mormons when they practiced polygamy in Illinois and the Utah Territory.

“…several [are] under investigation for child abuse…”

Let’s not forget that Joseph Smith married a 14-year-old girl, Brigham Young a 15-year-old, and John D. Lee a 12- or 14-year-old girl that he later divorced so she could marry his son.

But I think we can settle the issue of whether fundamentalists are Mormons by an appeal to a criterion deemed valid by Latter-day Saints everywhere, including LDS Church President Gordon B. Hinckley. Using their reasoning, of course polygamous fundamentalist are Mormons—many of them have “Church of Jesus Christ of Latter-Day Saints” right in the name of their church!

Who can argue with that?

Sharon surrendered her life to the Lord Jesus Christ in 1979. Deeply passionate about Truth, Sharon loves serving as a full-time volunteer research associate with Mormonism Research Ministry. Sharon and her husband live in Minnesota.
View all posts by Sharon Lindbloom →
This entry was posted in Fundamentalist Mormonism, Mormon History, Uncategorized and tagged Big Love, Polygamy. Bookmark the permalink.