Before You Visit Temple Square… 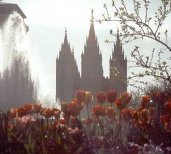 The AP article gives a typical summation of the LDS Church: one of the world’s fastest growing religions…estimated 12 million members…growing influence…Joseph Smith. And it praises the friendliness of the sister missionaries and the cleanliness of the grounds. But nestled between the parts that sound almost as if they were composed by the LDS Church PR department, we find this interesting tidbit:

“Even a quick, 30-minute tour of the grounds reveals a history of epic American drama and Western adventure: Smith’s death at the hands of an angry mob; early Mormons fleeing religious persecution in the Midwest; controversy over a church doctrine (officially abandoned in 1890) that endorsed polygamy; and Mormon pioneers who trekked across the plains in 1847 to find refuge and build a city near the shores of the Great Salt Lake.

“Like visitors to St. Peter’s Square in Rome, people touring Temple Square should expect to find a church-sanctioned version of history. So don’t come looking for a lengthy discussion of polygamy or a detailed explanation of the “Utah War” of 1857, when Mormon militia and federal troops engaged in a tense standoff.”

This reads as if reporter Jim Graham is connecting the synopsis of the Mormon story he’s just related–the “history of epic American drama and Western adventure”–with the caveat that this history is a “church-sanctioned” version that should be taken with a grain of salt.

It comes as no surprise that the LDS Church has designed Temple Square as a proselytizing tool. There, Mormon Church history is presented in a faith-promoting way, intended to evoke the strong emotions of sympathy and longing from visitors. The friendly sister missionaries present the Mormon faith in the same “church-sanctioned” fashion, being rather selective in which aspects of their religion they will and will not discuss.

As the tourist season is now upon us, perhaps some of you will be visiting Salt Lake City and Temple Square in the near future. In preparation for your trip I recommend you visit Temple-Square.org, a web site operated by Mormonism Research Ministry. Here you will find additional historical information about the LDS Church that will be helpful for you to know.

One Response to Before You Visit Temple Square…