Joel Kramer, director of Living Hope Ministries, was arrested Friday night near Logan, Utah as he attempted to film portions of the LDS pageant, Martin Harris: The Man Who Knew. The Salt Lake Tribune reports:

Joel Kramer, 39, was arrested and booked for disorderly conduct after he told a Cache County sheriff’s deputy he was not violating any laws by videotaping the pageant. The pageant depicts the life of Martin Harris, an early disciple of Joseph Smith, founder of The Church of Jesus Christ of Latter-day Saints.

“These are free pageants, so there’s no copyright violation and I’m within my rights to be on public land,” Kramer said. “I feel like it was the LDS church influence. That’s the reason I was arrested.” 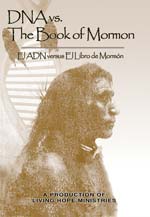 Mr. Kramer’s ministry has produced several excellent videos aimed at evangelizing Mormons including “DNA vs. the Book of Mormon” and “The Bible vs. the Book of Mormon.” His filming of The Man Who Knew (and other LDS pageants) was done with the intention of including clips in his future video productions. Mr. Kramer has talked with the police while filming at other LDS pageants, but has not been arrested before.

At the beginning of each pageant, an announcer asks the audience to refrain from taking photographs or video, Kramer said.

“It sounds like law, but it’s a request,” Kramer said. “It would be like me announcing over a loudspeaker that I would like them not to show the pageant.” 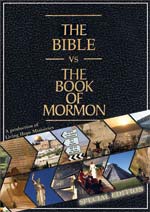 Friday night, Kramer said he and three other men from Living Hope Ministries turned off their cameras and tried to reason with the sheriff’s deputy, especially when told the [Clarkston] cemetery amphitheater had been leased by the city to the Mormon church. They also changed locations in the cemetery, moving farther away from the amphitheater, but Kramer was still arrested.

“I told (the officer) you just arrested me for breaking the LDS rules,” Kramer said, who added that none in his group went to the pageant to proselytize.

At the time of the news report prosecutors had not yet formally charged Mr. Kramer with a crime; nor was it clear whether they intended to do so.

I thought it was interesting to see the different ways this incident was reported. The Salt Lake Tribune seemed to achieve objectivity in their article. But the Logan Herald Journal report is another story.

The Salt Lake Tribune headline reads “Minister arrested after taping Mormon pageant.” The Herald Journal headline says “LDS critic arrested at pageant” and goes downhill from there. Take a look at a few excerpts from the article:

Though the Herald Journal reporting is a bit biased, the story does include some information that seems to support Mr. Kramer’s opinion that his arrest was influenced by the LDS Church factor:

Sheriff’s Lt. Matt Bilodeau said Kramer told deputies at the scene that his group did not believe in the tenets of the church and intended to “make a statement.”

“Our deputies were under the knowledge that they [the Living Hope Ministries team] were against the church,” said Bilodeau. Officers contract to provide law enforcement presence at the scene.

This raises the question: If it had been an LDS filmmaker rather than an evangelical one, would he have been arrested?

I don’t know the laws that govern this specific incident, but I have experienced LDS Church-influenced harassment by police and LDS security several times. I have never been arrested in these disputes, but I have been threatened with arrest, and once assaulted by LDS security, all while keeping my behavior well within the law. It has been my experience that in these situations the actual law isn’t the issue. The issue is the wishes of the powerful sponsor of the event — in these cases the LDS Church.

The mindset that allows people to run roughshod over Constitutional rights is evident in some of the comments left by readers at the KSL TV web site. Here are a few excerpts from what people are saying about Mr. Kramer’s arrest:

But sandwiched inside these comments are a few voices of reason. I particularly liked this response from Rachael C.:

Are you suggesting that this guy deserved to get arrested just because he is “very anti-LDS” and he MAY have used the tape to show the LDS church in a negative light? Are we living in Saudi Arabia here? Are Utah residents EXEMPT from practicing our civil liberties and rights? Wake up…UTAH is STILL in America, whether you want to accept it or NOT!!!!

And thanks be to God for the freedom guaranteed to citizens in the U.S.A.

Sharon surrendered her life to the Lord Jesus Christ in 1979. Deeply passionate about Truth, Sharon loves serving as a full-time volunteer research associate with Mormonism Research Ministry. Sharon and her husband live in Minnesota.
View all posts by Sharon Lindbloom →
This entry was posted in Civil Liberties and tagged Free speech, Joel Kramer. Bookmark the permalink.