Mormonism in the News

Posted on November 27, 2006 by Sharon Lindbloom

There’s been lots in the news lately about Mormonism; mostly related to Mitt Romney’s suitability as a presidential candidate in 2008. But there are some other tidbits that have cropped up as well. If you’re interested, here’s a run down with follow-up links to recent stories. 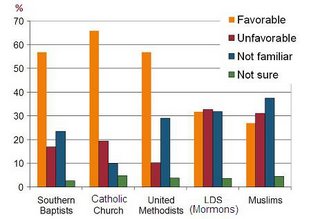 In early November BPNews.net (Baptist Press) published the results of a recent poll conducted by the denomination’s North American Mission Board. The goal of the research was to see how Americans view Southern Baptists, including how they are perceived in comparison to other religions in America. Southern Baptists were viewed favorably by 57 percent of the 1,210 American adults polled across the country. Furthermore, as illustrated by the above graphic,

The positive outlook toward Southern Baptists, United Methodists and the Catholic Church was about the same in the survey, while the Church of Jesus Christ of Latter-day Saints (Mormons) and Muslims received less favorable ratings, 32 percent and 27 percent, respectively.

Another graph (available as part of a PowerPoint download from the North American Mission Board) presents greater detail of the respondent’s perceptions. According to this graph, the American adult impression of Mormons breaks down like this:

The Mormon Church has suffered defeat in its legal campaign to stop rates bills being slapped on its massive temple in Chorley.Top judges ruled against the Church of Jesus Christ of the Latter-Day Saints, saying the temple did not qualify for a rates exemption — because it can only be used by selected Mormon believers and is not “a place of public religious worship.”

This decision came in answer to an appeal brought by the LDS Church regarding a previous ruling. Astutely assessing the situation, Lord Justice Neuberger dismissed the appeal stating,

“The activities carried out in the temple, far from ‘relating to the organisation of the conduct of public religious worship,’ are in reality ‘acts of ritual worship carried out in private’.”

Finally, there have been some interesting items online regarding Mitt Romney and his potential run for U.S. President. On November 20th the Salt Lake Tribune reported the results of a new poll of 1,000 likely voters regarding whether or not they would vote for a Mormon for president. The poll showed that 43 percent of Americans wouldn’t even consider voting for a Mormon. The number is even higher among those who identified themselves as evangelicals, standing at 53 percent. The Salt Lake Tribune reported:

Rick Beltram, an evangelical and chairman of the South Carolina’s Spartanburg County Republican Party, says he believes the poll is probably accurate, but also noted that a generic poll does not indicate how people feel about Romney after hearing him talk about his religion.”That’s obviously his biggest obstacle,” Beltram says of Romney’s faith in the Church of Jesus Christ of Latter-day Saints. “But I’ve also found that the more time that he or someone with him explains his beliefs, that’s not the case.” If Romney can dissuade voters from believing his faith is a cult, as some evangelicals view it, his support is likely to grow, Beltram says.

Yesterday TIME magazine posted “Can a Mormon be President?” by journalist Mike Allen, who raised an interesting point:

[LDS] church officials are wary of the impact Romney’s candidacy could have on them–and on the portrayal of their faith. Yes, his campaign will bring attention and credibility to the Church of Jesus Christ of Latter-day Saints (LDS), as the Mormons are formally known, and give them a chance to demystify their theology and customs. But church officials also calculate that Romney’s bid to succeed George W. Bush could remind some mainstream Christians just how different Mormonism is from their faith…

I would be thrilled to hear Mitt Romney explain and communicate the doctrines of Mormonism. I myself campaign for the LDS Church to openly present its theology and customs to the world. It’s an exciting prospect; however, history and experience tell me this will not happen.

Consider the TIME article’s explanation of the concern Evangelicals have with Mormonism:

Evangelicals hold the view that Mormonism is not a Christian faith. Because Mormons acknowledge works of Scripture that are not in the Bible, believe that their prophets have received revelations directly from God and teach that God has a physical body, Evangelicals consider them heretics.

While all of this is basically true, the explanation is an extreme understatement of the facts as they are; it leaves readers with the mistaken impression that the theological concerns Christian faiths have with Mormonism are perhaps a bit trivial, and certainly not deserving of the majority of evangelicals saying they would not consider supporting the election of a Mormon for president.

I realize that the above statement was provided by TIME magazine, not the LDS Church or Mitt Romney. Yet there is even less reason to hope for a clear presentation of LDS theology from these sources. TIME magazine reported:

Calling himself “a religious person,” Romney in June used the Charlie Rose Show on PBS to test-drive an answer that keeps him from getting into the nitty-gritty of his religious heritage. “I believe that Jesus Christ is my savior,” he said. “But then as you get into the details of doctrines, I’d probably say, ‘Look, time out. Let’s focus on the values that we share.'”

Though the LDS Church and Governor Romney may avoid answering the tough questions, answers are available for those who seek them. From the National Review Online blog row, The Corner has recently published representative emails from a few people who recognize that the problems with Mormonism are more significant than the media lets on. You can read them here and here.

And, of course, factual information on Mormonism and how it compares with biblical Christianity is available 24/7 at Mormonism Research Ministry and many other fine web sites accessible through the MRM links page.