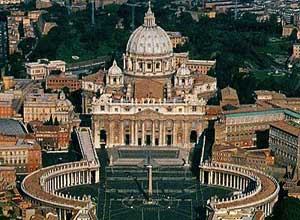 A couple of weeks ago the Vatican released a document which reaffirmed its belief that the Roman Catholic Church is the only true church. In the mass of media coverage following the release of this document, one Canadian newspaper column caught my attention.

Paul Albers is a freelance columnist in Ottawa who also happens to be LDS. Using the controversy surrounding the Vatican’s reaffirmation as a springboard, Mr. Albers wrote an opinion piece for the Canada Free Press in which he takes issue with evangelicals who delineate doctrinal differences between Mormonism and traditional Christianity, and who make an effort to proselytize Mormons. He wrote:

“An industry has developed among Evangelicals that is focused on attacking other denominations, branding them as ‘cults of Christianity’ just for disagreeing with some of the conclusions they have reached about Christian doctrines. Individuals and businesses in this industry make their living selling books, movies and presenting speeches on the perceived evils and errors of their targets. Their hit list includes Jehovah’s Witnesses, Christadelphians, Seventh Day Adventists and The Church of Jesus Christ or Latter-Day Saints (also known as the Mormons).

“As a practicing Mormon, I find it amusing to see their consternation at the Pope’s words when it is impossible for us to hold a single General Conference, temple dedication or religious pageant without Evangelicals showing up insulting and desecrating what we hold sacred in protest of the mere existence of our faith. In 1998 the Southern Baptist Convention decided to hold their national convention in Salt Lake City specifically to target Mormons for conversion. Mormons generally shrug these stunts off, supporting the right of all religions to conduct missionary work, but I can’t help but wonder how Evangelicals would react if Catholics began showing up at their events with anti-Protestant placards and pamphlets.”

I can’t speak for all evangelicals, but I recall a discernment conference I attended a few years back. Some folks from a group identified within the conference as heretical stood outside the building handing out opposition pamphlets to conference attendees. The evangelical response was to dialog with these folks, invite them in for lunch, and allow them to attend — and address — the conference session that covered their specific faith group.

At any rate, Mr. Albers offered this advice to Catholics and Protestants alike:

“Those who want to proselytize others to their faith would do better to concentrate on making the case for their position rather than going on the offensive against what others believe. They will likely be more successful that way as well…

“Freedom of religion is undermined by churches that spend their resources trying to tear down other religions, spread misinformation about them, or foster contention between faiths.”

I thought Mr. Albers’ advice surprising in light of teachings from the LDS Church’s last General Conference. Consider these:

Offensive against what others believe: “The knowledge of God and His physical separateness from His Son and the Holy Ghost was lost after the death of Christ and His Apostles. Confusion and false doctrines about the Godhead were fashioned out of the Nicene Creed and Constantinople councils…I know that heaven-sent revelations have replaced the gross errors of man-made doctrines concerning the Godhead.” (Gary J. Coleman, “Mom, Are We Christians?” Ensign 5/2007, 92, 93)

Misinformation: “When the emperor Constantine was converted to Christianity, he became aware of the divisiveness among the clergy concerning the nature of Deity. In an attempt to overcome this he gathered the eminent divines of the day to Nicaea in the year 325… When a definition could not be reached, a compromise was made. It came to be known as the Nicene Creed, and it’s basic elements are recited by most of the Christian faithful.” (Gordon B. Hinckley, “The Things of Which I Know,” Ensign 5/2007, 83)

Fostering discord between faiths: Speaking of the organization of the LDS Church, “Thus the Church of Jesus Christ was again in existence on the earth to bless mankind with the doctrines and teaching of the Savior… the fullness of the gospel of Jesus Christ has been restored to the earth…you can compare the glorious message with what you may hear from others, and you can determine which is from God and which is from man.” (L. Tom Perry, “The Message of the Restoration,” Ensign 5/2007, 88)

As readers of Mormon Coffee know, I don’t have a problem with the LDS Church pointing out differences between the doctrines of Mormonism and the doctrines of other faiths. Freedom of religion is not “undermined” when the LDS Church asserts that its doctrines and organization are true, which results in an implied proclamation that faiths in disagreement with Mormonism are not true. The problem I have is with the double standard I see so often coming from Latter-day Saints.

In his column, Mr. Albers was the proverbial pot calling the kettle black. I would like him to keep this in mind:

During their time in the mission field, most Christian missionaries around the world seldom find it necessary to discuss Mormonism (or the other religions on Mr. Albers’ list). The Christian missionary message begins with, “All have sinned and fallen short of the glory of God” (Romans 3:23). The Gospel message moves on to discuss the remedy for man’s eternal peril, Jesus Christ (see 2 Corinthians 5:21).

Every Mormon missionary kicks off his or her “gospel presentation” with a direct offensive against every non-LDS church. But it’s evangelicals who are chastised and accused of undermining freedom of religion.

Sharon surrendered her life to the Lord Jesus Christ in 1979. Deeply passionate about Truth, Sharon loves serving as a full-time volunteer research associate with Mormonism Research Ministry. Sharon and her husband live in Minnesota.
View all posts by Sharon Lindbloom →
This entry was posted in Mormon Missionaries. Bookmark the permalink.

30 Responses to Evangelicals Accused of Undermining Freedom of Religion