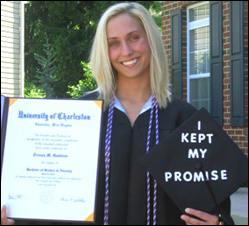 The state of West Virginia offers financial aid to students via various funds and scholarships. One, PROMISE Scholarship (Providing Real Opportunities for Maximizing In-state Student Excellence), is described on its web site as “a merit-based scholarship program designed to keep qualified students in West Virginia by making college affordable.” As reported in The West Virginia Record,

“A West Virginia University student is suing a state scholarship board, claiming his constitutional rights were violated when his scholarship was taken away because he chose religion over education.

“David Isaac Haws, a 21-year-old Mormon student from Bridgeport, is the subject of a lawsuit filed in federal court July 19 by the American Civil Liberties Union. The suit claims the West Virginia Higher Education Policy Commission and PROMISE Scholarship Board violated his First Amendment rights to freely exercise his religion.

“Haws claims he was refused a deferment of his PROMISE scholarship when he chose to serve a two-year mission for the Church of Jesus Christ of Latter-Day Saints.”

After being awarded the PROMISE Scholarship in 2004, Mr. Haws attended the West Virginia University for one year, maintaining a 4.0 GPA. At the end of that academic year Mr. Haws requested a scholarship deferment so he could go on a two year mission for the LDS Church. His request was denied in accordance with scholarship rules. He appealed the board’s decision in August of 2005, losing the appeal.

“The suit says Haws was then forced to choose between his education and his religious calling.

“‘This was a hard decision for Mr. Haws,’ the suit says. ‘But his devotion to Jesus Christ came first, so he chose to serve his mission.'”

Mr. Haws made an admirable choice. After weighing his options and their consequences, he decided to take the road less traveled. He chose commitment to his church over money.

But now Mr. Haws is suing the state scholarship board.

“Haws seeks a declaration that the actions of the boards are unconstitutional, illegal and void. He seeks immediate reinstatement of his scholarship and all the rights and privileges he had when he completed the Spring 2005 semester. He also seeks attorney fees, court costs and other damages.”

To put Mr. Haws’ claims in some sort of context, the PROMISE Scholarship allows for leaves of absence for those requiring family medical leave, bereavement leave, military leave, and unforeseen leave. In other words, it allows for leaves for things outside of the student’s control. In addition, the Leave of Absence Policy states:

The PROMISE Board does not wish to grant personal leaves of absence for any reason.

When Mr. Haws began his college education with the PROMISE Scholarship, the Leave of Absence Policy was in place. When he decided to voluntarily leave school at that particular time in order to serve an LDS mission, he understood that decision would require him to give up the scholarship.

Okay, these are the facts as reported in the media. The courts will decide whether Mr. Haws’ claims have merit. But I’m interested in what you think.

Do you think Mr. Haws’ First Amendment right to freely exercise his religion was violated by the scholarship boards’ decision?

Sharon surrendered her life to the Lord Jesus Christ in 1979. Deeply passionate about Truth, Sharon loves serving as a full-time volunteer research associate with Mormonism Research Ministry. Sharon and her husband live in Minnesota.
View all posts by Sharon Lindbloom →
This entry was posted in Mormon Missionaries. Bookmark the permalink.

19 Responses to LDS Student Sues Over Loss of Scholarship