Elijah Abel: “Thy Soul [Shall] Be White in Eternity”

Posted on February 20, 2008 by Sharon Lindbloom 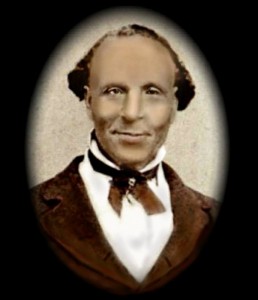 Elijah Abel was the first Black man to hold the priesthood in the LDS Church. He received his ordination as Elder on March 3, 1836. Later Elijah was ordained a member of the Third Quorum of the Seventy. In 1838 he went on missions to Canada and New York, and served a mission to Ohio late in his life.

While in Nauvoo, Joseph Smith gave Elijah the calling of an undertaker. Elijah was a good friend of the Prophet’s; he once (unsuccessfully) attempted to rescue the Prophet from illegal detainment in Illinois.

When Elijah arrived in the Salt Lake Valley in 1853, he contributed his carpentry skills to the building of his third temple, having previously worked on both the Kirtland and Nauvoo temples. Elijah worked at many trades throughout his life, including performing in minstrel shows with his family.

Following is the text of Elijah Abel’s Patriarchal Blessing, pronounced by Joseph Smith, Sr., circa 1836:

Brother Able, in the name of Jesus Christ I lay my hands upon thy head to bless thee and thou shalt be blessed even forever. I seal upon thee a father’s blessing, because thou art an orphan, for thy father, hath never done his duty toward thee, but the Lord hast had his eye upon thee, and brought thee through straits and thou hast come to be rec[k]oned with the saints of the most High. Thou hast been ordained an Elder and anointed to secure thee against the power of the destroyer. Thou shalt see his power in laying waste the nations, & the wicked slaying the wicked, while blood shall run down the streets like water, and thy heart shall weep over their calamities. Angels shall visit thee and thou shalt receive comfort. They shall call thee blessed and deliver thee from thine enemies. They shall break thy bands and keep thee from afflictions. Thy name is written in the Lamb’s book of life.

Thou shalt travel in the East and visit foreign countries, speak in all various tongues, and thou shalt be able to teach different languages. Thou shall see visions of this world and other worlds and comprehend the laws of all kingdoms, and confound the wisdom of this generation. Thy life shall be preserved to a good old age. Thou must seek first the kingdom of heaven and all blessings shall be added thereunto. Thou shalt be made equal to thy brethren and thy soul be white in eternity and thy robes glittering: thou shalt receive these blessings because of the covenants of thy fathers. Thou shalt save thousands, do much good, and receive all the power that thou needest to accomplish thy mission. These and all the blessings which thou canst desire in righteousness, I seal upon thee, in the name of Jesus, Amen.

Though Elijah spent his life serving in the LDS Church, he had one desire which was denied him in this life. According to A Book of Mormons,

“Abel had received washings and anoitings in the Kirtland Temple in 1836, before the complete endowment ceremonies had been established. Though he acted as proxy in baptisms for the dead in Nauvoo and Slat Lake City, Brigham Young denied his request to be sealed to his wife and family [8 children]: that was a ‘privilege’ he ‘could not grant,’ a decision later reaffirmed by President John Taylor.” (Richard S. Van Wagoner and Stephen C. Walker, 4)

As race relations in the Church continued to deteriorate over time, LDS Apostle Joseph Fielding Smith even attempted to deny that Elijah Abel had ever been a priesthood holder. Responding to a private inquiry, Mr. Smith claimed Church historian Andrew Jensen had gotten it wrong when he put Elijah’s ordination to the priesthood in the Latter-day Saint Biographical Encyclopedia. Mr. Smith suggested that there were two men named Elijah Abel; the historian had confused the “names and the work done by one man named Abel … with the name of the Negro who joined the Church in an early day.” (Joseph Fielding Smith to Mrs. Floren S. Preece, 18 Jan. 1955, S. George Ellsworth Papers, Utah State University, Logan)

“According to the doctrine of the church, the Negro, because of some condition of unfaithfulness in the spirit—or pre-existence, was not valiant and hence was not denied the mortal probation, but was denied the blessing of the Priesthood. In the Church of Jesus Christ of Latter-day Saints he has the privilege of baptism, confirmation and membership along with everyone else, as far as this life is concerned.

“…It is true that elders of the church laid hands on a Negro and blessed him ‘apparently’ with the Priesthood, but they could not give that which the Lord had denied. It is true that Elijah Abel was so ‘ordained.’ This was however before the matter had been submitted to the Prophet Joseph Smith. …It was afterwards that the Prophet Joseph Smith declared that the Negro was not to be ordained.” (Letter from Joseph Fielding Smith to Joseph H. Henderson, April 10, 1963)

Elijah Abel died in Utah on Christmas Day, 1884. His obituary, which appeared in Deseret News, said Elijah “died in full faith of the Gospel.” He was buried in Salt Lake City Cemetery. In 2002 a monument was erected over his grave and dedicated by LDS Apostle M. Russell Ballard.

Sharon surrendered her life to the Lord Jesus Christ in 1979. Deeply passionate about Truth, Sharon loves serving as a full-time volunteer research associate with Mormonism Research Ministry. Sharon and her husband live in Minnesota.
View all posts by Sharon Lindbloom →
This entry was posted in Mormon History, Uncategorized. Bookmark the permalink.

3 Responses to Elijah Abel: “Thy Soul [Shall] Be White in Eternity”