The Privilege to Worship What They May

On the “Before God Was God” thread here on Mormon Coffee a Latter-day Saint has been defending his position that Mormonism is not polytheistic. The core of his argument resides in his definition of “polytheism,” which he defines as the worship of more than one God. He posits that Latter-day Saints worship only Heavenly Father; they do not worship any other Gods. I asked him about the worship of Jesus Christ and provided two supporting statements made by late LDS prophet Gordon B. Hinckley:

“We honor Him, we worship Him, we love Him as our Redeemer, the great Jehovah of the Old Testament, the Messiah of the New Testament.” (”A Testimony of the Son of God,” Ensign, 12/2002 p. 4)

If Mormons worship Heavenly Father (one God) and Jesus Christ (a second God), they would be polytheists according to our Mormon friend’s definition. He responded,

“As for President Hinckley’s comment, i do not agree with his use of the word ‘worship’, and this may be just an argument of semantic, which is prevalent on this board. However, as a mormon, i and we only pray TO Our Heavenly Father. Though your quote has minor merit, it is hardly a statement of doctrine. It is hardly a revelation that any religious doctrine may have a verse, statement, or idea that is an inconsistency or contradiction. Even as a prophet, man is not, and never can be, perfect.”

This raises all sorts of issues, not the least of which being the idea that the LDS prophet was wrong about something so basic and important as who members of the “Only True Church” worship. But the question that interests me at the moment is whether or not Mormonism promotes the worship of Jesus Christ. 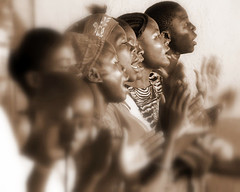 Worship of Christ as God is and has always been at the core of Christianity. From His birth (Matthew 2) to His resurrection (Matthew 28) to His triumphant return (Revelation 22), Jesus Christ is to be worshipped.

Yet Mormons disagree about whether they do or ought to worship Christ. On May 2nd (2008) the Mormon Insights blog discussed this question. “Do Mormons Worship Jesus?” LDS blogger S. Faux asked. The answer is long — and complicated.

After providing four sample quotes from the March 2008 Ensign magazine stating that Mormons do worship Christ, and providing several references from LDS scriptures that state Mormons worship the Father “in the name of Christ,” S. Faux demonstrates how LDS Apostle Bruce McConkie introduced confusion on the issue when he taught,

“We worship the Father and him only and no one else.

“We do not worship the Son, and we do not worship the Holy Ghost. I know perfectly well what the scriptures say about worshipping Christ and Jehovah, but they are speaking in an entirely different sense–the sense of standing in awe and being reverentially grateful to him who has redeemed us. Worship in the true and saving sense is reserved for God the first, the Creator.” (BYU Devotional, March 2, 1982)

But in his book Mormon Doctrine, Mr. McConkie wrote:

S. Faux doesn’t accept Bruce McConkie’s idea that the worship Mormons offer to Jesus is somehow a lower form of worship than that offered to the Father. Indeed, there doesn’t seem to be any LDS support for that apart from Mr. McConkie. Yet some Mormons subscribe to that notion as they attempt to support their claim of monotheism by insisting Latter-day Saints worship only one God — in the face of evidence to the contrary.

It seems that Mormons are on the horns of a dilemma. Their faith requires either:

Either way Mormonism is way outside the boundaries of historic, biblical Christianity.

” This is God’s design…His aim is that the nations — all the nations (Matthew 24:14) — worship His Son. This is God’s will for everybody in your office at work, and in your neighborhood and in your home. As John 4:23 says, ‘Such the Father seeks to worship Him.’ At the beginning of Matthew we still have a ‘come-see’ pattern. But at the end the pattern is ‘go-tell.’ The magi came and saw. We are to go and tell. But what is not different is that the purpose of God is the ingathering of the nations to worship His Son. The magnifying of Christ in the white-hot worship of all nations, the reason the world exists.”

One day all will know, without question, that Jesus Christ is worthy of worship, for “God has highly exalted Him and bestowed on Him the name that is above every name, so that at the name of Jesus every knee should bow, in heaven and on earth and under the earth, and every tongue confess that Jesus Christ is Lord, to the glory of God the Father” (Philippians 2:9-11).

Come before the King of kings now — and worship Him.

55 Responses to The Privilege to Worship What They May