At the Mormon.org website, visitors can learn about Joseph Smith and what he means to members of The Church of Jesus Christ of Latter-day Saints. Under the sub-heading, “A Martyr of the Restored Gospel,” the site says,

“Joseph Smith gave his life for the cause of truth.

“Some people mistakenly believe Mormons worship Joseph Smith. This is false; we worship God the Father and His Son Jesus Christ. Joseph was not a perfect person, nor a deity. He was a man of virtue who fulfilled an extraordinary calling.” 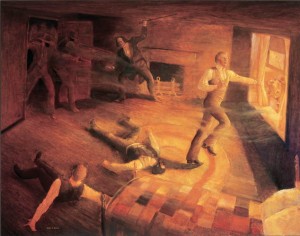 It’s a curious thing that “some people mistakenly believe Mormons worship Joseph Smith.” But perhaps there is a reason some get that idea.

Consider Mormon apostle Stephen L. Richards who, in 1941, commented that

“the day will come when the righteous of the earth will look to [Carthage Jail] and make their pilgrimages to it in worshipful veneration of the ‘man who communed with Jehovah.’” (Quoted in Brian Q. Cannon, “ ‘Long Shall His Blood…Stain Illinois’: Carthage Jail in Mormon Memory, 10. [pdf] Cannon citation: Journal History, October 31, 1953, 6; August 30, 1941, 2–3)

“The Old Carthage Jail, where Mormon founder Joseph Smith was murdered in 1844, holds the same significance to his approximately 6.5 million followers as Calvary holds for Christians all over the world.

These Mormon men were apparently mistaken in what they said, for Mormons do not worship Joseph Smith. Nevertheless, it seems there has been plenty of confusion throughout the history of Mormonism regarding who Mormons do worship. In Mormonism, the Father, Son, and Holy Ghost are three deities – three Gods (see the LDS Bible Dictionary, “God”). The question is, are they supposed to worship only one of these Gods, or are they to worship two, or perhaps all three of them? Members of the Mormon Church remain confused over the issue. Contradictory authoritative teaching in the Church is likely the reason why.

In 1912, in an effort to correct a mistaken Mormon belief resulting from doctrine taught by Brigham Young that the first human being, Adam, was God the Father, the Mormon Church’s First Presidency clarified, 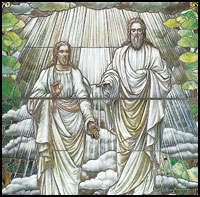 Mormons were not to worship Adam or Jesus, but were to worship Heavenly Father alone. Half a century later, in 1966, Mormon apostle Bruce R. McConkie believed something different. He explained that Mormons worship three deities:

“Three separate personages – Father, Son, and Holy Ghost – comprise the Godhead. As each of these persons is a God, it is evident, from this standpoint alone, that a plurality of Gods exists. To us, speaking in the proper finite sense, these three are the only Gods we worship. But in addition there is an infinite number of holy personages, drawn from worlds without number, who have passed on to exaltation and are thus gods.” (Bruce R. McConkie, Mormon Doctrine, 1966, 576. Italics in original)

Then, in 2002, Mormon President Gordon B. Hinckley clarified in the Church’s General Conference,

“Latter-day Saints pray to God the Father in the name of Jesus Christ. They acknowledge the Father as the ultimate object of their worship, the Son as Lord and Redeemer, and the Holy Spirit as the messenger and revealer of the Father and the Son.” (“Godhead”)

Perhaps there is a difference between “the central focus” and “the ultimate object” of a Mormon’s worship; yet in the most recent quote above, there seems to be a distinction between worshiping the Father while acknowledging the Son and Holy Spirit.

In light of this, I don’t know if the December 2012 Ensign magazine actually clarified which God/Gods Mormons are to worship when it seemed to disagree with the lds.org website:

“While we believe Joseph Smith was a prophet of God, we worship our Heavenly Father and His Son, Jesus Christ.” (“What We Believe,” Ensign, December 2012, 8)

I’m inclined to think that the Ensign statement just muddied the waters because lds.org also says this:

“To worship God is to give Him our love, reverence, service, and devotion. The Lord commanded Moses, “Worship God, for him only shalt thou serve” (Moses 1:15)…

“Prayer is one way to worship Heavenly Father…

“Participation in priesthood ordinances is also part of worship. As we reverently partake of the sacrament and attend the temple, we remember and worship our Heavenly Father and express our gratitude for His Son, Jesus Christ.” (“Worship”)

“ ‘We testify that He will someday return to earth. ‘And the glory of the Lord shall be revealed, and all flesh shall see it together’ ( Isaiah 40:5). He will rule as King of Kings and reign as Lord of Lords, and every knee shall bend and every tongue shall speak in worship before Him.’” (“Jesus Christ”)

I don’t know exactly what it means that every tongue will “speak in worship,” but I do know that these entries at lds.org (as well as the entry titled “Holy Ghost”) say nothing about Mormons today actually worshiping either the Son or the Spirit; they only speak of worshiping the Father.

So while it’s pretty clear that Mormons do not worship Joseph Smith, the identification of which of the Mormon Gods they are supposed to worship remains a bit fuzzy.