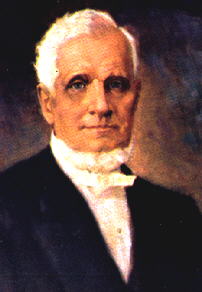 Tomorrow (November 1, 2008) marks the 200th anniversary of the birth of Mormonism’s third prophet and president, John Taylor. Taylor became an LDS apostle in 1838, then became the President of the LDS Church in 1880. Having married 16 women (8 of them in the year 1846) and fathered 35 children, John Taylor died of congestive heart failure on July 25, 1887 (see Richard S. Van Wagoner and Steven C. Walker,A Book of Mormons).

John Taylor is well known for the comfort he provided Joseph Smith during Smith’s last hours in Carthage Jail when he twice sang, at the Prophet’s request, “A Poor Wayfaring Man of Grief.” Perhaps lesser known are some of John Taylor’s teachings. In honor of his 200th birthday, a few notable teachings from John Taylor are provided below.

“We are accused here of polygamy, and actions the most indelicate, obscene and disgusting, such that none but a corrupt and depraved heart could have contrived. These things are too outrageous to admit of belief;… I shall content myself by reading our views of chastity and marriage, from a work published by us containing some of the articles of our Faith. ‘Doctrine and Covenants,’ page 330… Inasmuch as this Church of Jesus Christ has been reproached with the crime of fornication, and polygamy, we declare that we believe that one man should have one wife, and one woman but one husband, except in the case of death,…'” (Three Nights’ Public Discussion, 8, 1850)

“All commandments that I [God] give must be obeyed unless they are revoked by me or by my authority and how can I revoke an everlasting covenant for I the Lord am everlasting and my everlasting covenants cannot be abrogated nor done away with but they stand forever. I have not revoked this law [of plural marriage] nor will I for it is everlasting and those who enter into my glory must obey the conditions thereof, even so amen.'” (September, 1886. This controversial unpublished revelation was given to John Taylor in answer to his petition to God “respecting the possibility of giving up plural marriage.” From the John Taylor Letter File, LDS Archives, quoted in Richard S. Van Wagoner, Mormon Polygamy: A History, 128)

“Referring to the United Order, the Lord has given us to understand that whosoever refuses to comply with the requirements of that law, his name shall not be known in the records of the Church, but shall be blotted out, neither shall his children have inheritance in Zion. Are these the worlds of the Lord to us? I suppose there are none here today but would say, Yes. How, then can I or you treat lightly that which God has given us?” (September 21, 1878, Journal of Discourses, 21:58)

“…we are the only people that know how to save our progenitors, how to save ourselves, and how to save our posterity in the celestial kingdom of God;…that we in fact are the saviours of the world, if they ever are saved…” (January 17, 1858, Journal of Discourses, 6:163)

“…God will introduce a rule and government of his own upon the earth, and that all nations, all rule, all power, all government, all authority, will have to submit to that rule, that government, and that authority; that is, this government will spread and extend…There are many people that have believed in these things, many religious parties have written about them; …But when we go a little further and say, we believe that we are the people, then it places things in another position… We do believe it, and we honestly acknowledge that this is that kingdom which the Lord has commenced to establish upon the earth, and that it will not only govern all people in a religious capacity, but also in a political capacity.” (January 8, 1865, Journal of Discourses 11:53)

Sharon surrendered her life to the Lord Jesus Christ in 1979. Deeply passionate about Truth, Sharon loves serving as a full-time volunteer research associate with Mormonism Research Ministry. Sharon and her husband live in Minnesota.
View all posts by Sharon Lindbloom →
This entry was posted in Early Mormonism. Bookmark the permalink.