The House that John Built

Posted on September 30, 2010 by Sharon Lindbloom 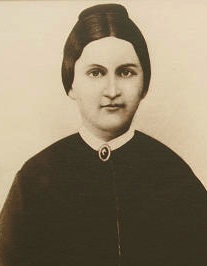 John Patten, Jr. and Candace Smith were newlyweds when John built their home in Manti, Utah. Constructed in 1854, the Patten home is now a museum that “stands as a symbol for the same industry, faith and hope” as does the LDS temple in Manti, according to Deseret News. The LDS Church-owned newspaper recently highlighted the Patten pioneer home, calling it “one of Manti’s treasures.” Deseret News reported,

“It served as a home to Patten and his two wives and their 13 children. (As was an accepted custom of the time, after the death of his first wife, Candance [sic] Smith, Patten married her sister Emily.)”

Whether or not that was an accepted custom of the time, that’s not what John actually did.

According to a Google-cached genealogical record on rootsweb (dated May 3, 2010), John married Candace’s widowed sister, Emily, as a plural wife 10 years before Candace’s death. On November 8, 1858, about a year and a half after John and Emily’s wedding, their first of five children was born.

If these records are accurate, in marrying his wife’s sister, John Patten, Jr. became a polygamist according to the dictates of his Mormon religion. But in doing so he ignored God’s law: “And you shall not take a woman as a rival wife to her sister, uncovering her nakedness while her sister is still alive” (Leviticus 18:18).

Sharon surrendered her life to the Lord Jesus Christ in 1979. Deeply passionate about Truth, Sharon loves serving as a full-time volunteer research associate with Mormonism Research Ministry. Sharon and her husband live in Minnesota.
View all posts by Sharon Lindbloom →
This entry was posted in Early Mormonism and tagged John Patten Jr., Manti, Polygamy. Bookmark the permalink.

44 Responses to The House that John Built