Posted on February 15, 2010 by Aaron Shafovaloff 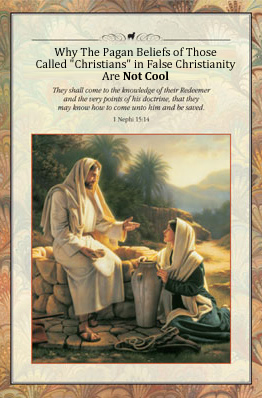 The Gospel Principles 2009 manual essentially calls classical Christianity “false Christianity” and its theology of God “pagan” and its adherents those who are “called” Christian.

If we talked about Mormon beliefs and Mormonism and Mormon members this way, we’d get priesthood-slapped.

Yes, you heard me right. Let me explain.

In chapter 16 it implicitly taps into popular assumptions about Nicaea and then says that “false Christianity” (that the “Roman emperor adopted”) “taught that God was a being without form or substance.”

My first reaction was that the New Testament teaches that Jesus is the image of the invisible God, and that God is spirit, etc.

But then it struck me: WAIT, did a 2009 LDS Church manual just make a delineation between true and FALSE Christianity partly the basis of teaching that “God was a being without [spatial] form or [material] substance”?

Mormonism has been complaining for a long while now that anyone should make pronouncements about what is and what is not true Christianity. But here we have it in the 2009 manual: Mormonism has essentially fired a shot at Roman Catholicism, Protestantism, and Eastern Orthodoxy as being “false Christianity” for teaching the “pagan”[1] idea that “God [is] a being without form or substance.”

Here is the quote (with emphasis added):

Soon pagan beliefs dominated the thinking of those called Christians. The Roman emperor adopted this false Christianity as the state religion. This church was very different from the church Jesus organized. It taught that God was a being without form or substance.

Make no mistake, the manual is not doing ALL of what Mormons complain that the wide range of countercultists do, but it is hypocritically doing a great deal of it. The manual digs its criticism in by calling these people with pagan beliefs those “called Christians”. It in effect is calling them so-called Christians. So the manual isn’t merely criticizing the religious systems (which teach God is spirit and not a material substance) as false Christianity; it is also suggest its adherents are merely “called” Christians.

Ask yourselves, what kind of vehement reaction do evangelicals get when we speak of Lorenzo Snow couplet theology as “pagan” and of Mormonism as “false Christianity”[2] and of Mormons as those “called” Christians? Look, I don’t believe it’s inherently wrong to say someone’s beliefs are pagan, or that a religion is a false Christianity, or that many of its adherents are only called Christians[3]. Mormonism is a false Christianity with pagan beliefs and with many adherents that are merely “called” Christians. But I’ve been given a lot of grief for saying those kinds of things, with the premise that saying such things is unethical. I just am calling out the LDS Church for its hypocrisy on this.

I would rather that they just get all McConkie on us[4]. We’re big boys. The more cards we have out on the table the easier it can be for us to tackle the big issues!

[1] Ironically, at other times in Mormon history the “pagan” concept of God has been glorified, not criticized.

[2] When the GP manual essentially says traditional Christianity has “pagan beilefs” and is a “false Christianity”, it isn’t flattering. It might help some Mormons feel better to explain, “But hey, it didn’t say traditional Christianity is non-Christianity, it just says it is FALSE Christianity”, but it seems like an exercise in missing the point. At the colloquial level evangelicals don’t make a big distinction between the two. I’m reminded of Paul in Galatians 1 who said he was disturbed that people were turning to a “different gospel”. Paul immediately then says, “not that there is another one”. That’s how I feel about “false” Christianity. Like Paul can speak of a “different” gospel that is no gospel at all, I can speak of a different, false Christianity that in theological essence is no Christianity at all. But that’s not all that can be said on the issue. I would agree with Rob Bowman’s articulation elsewhere that Mormonism is within sociological Christianity but not within the Biblically theological Christianity. Inasmuch as Christianity is a historical, sociologically identified movement that is marked by a general focus and devotion to the historical person of Jesus, Mormonism is Christian. But inasmuch as Christianity is the body of believers that is faithful to the essential doctrines taught in the Bible, Mormonism is not Christian.

[3] It would however be wrong to stereotype all Mormons as non-Christians. Not all Mormons believe in the distinctives of traditional Mormonism, and frankly some Mormons are struggling evangelicals-in-embryo.

[4] “You talk about teaching false doctrine and being damned. Here is a list of false doctrines that if anyone teaches he will be damned. And there is not one of these that I have ever known to be taught in the Church, but I am giving you the list for a perspective because of what will follow. Teach that God is a Spirit, the sectarian trinity. Teach that salvation comes by grace alone, without works. Teach original guilt, or birth sin, as they express it. Teach infant baptism. Teach predestination. Teach that revelation and gifts and miracles have ceased. Teach the Adam-God theory (that does apply in the Church). Teach that we should practice plural marriage today. Now, any of those are doctrines that damn” (Sermons and Writings of Bruce R. McConkie, p.337).

Update: Sharon showed us another McConkie quote: “And virtually all the millions of apostate Christendom have abased themselves before the mythical throne of a mythical Christ whom they vainly suppose to be a spirit essence who is incorporeal uncreated, immaterial and three-in-one with the Father and Holy Spirit” (Mormon Doctrine, pg.269).

This entry was posted in Uncategorized and tagged Gospel Principles, Great Apostasy. Bookmark the permalink.