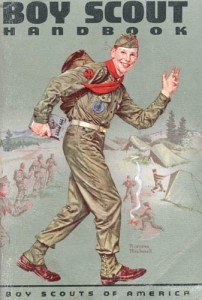 We blogged about this story here at Mormon Coffee last week, but it is still very much in the news. A big hubbub is being made because a Mormon couple was not allowed to become Cub Scout leaders at a pack sponsored by a North Carolina Presbyterian church. Christ Covenant Church, which is about 10 miles from Charlotte, said the couple’s two boys (ages 6 and 8 ) could continue attending but the parents would not be able to become leaders.

“I can’t believe they had the audacity to say, ‘You can’t be leaders, but we want your boys,” the mother told an Associated Press journalist. “Are you kidding me?” she added, “Do you really think I’d let my boys go there now?”

Hmmm. I’m sure this wasn’t the only question raised by this very passionate mother, so as a follow-up to last week’s blog, let me predict a few more questions this mother might raise, and provide answers that make rational sense:

“Some who write anti-Mormon pamphlets insist that the Latter-day Saint concept of Deity is contrary to what is recognized as traditional Christian doctrine. In this way they are quite correct.”

“As a church we have critics, many of them. They say we do not believe in the traditional Christ of Christianity. There is some substance to what they say.”

So, in essence, Mormons want to be called Christian while denying the very essence of what defines Christianity, i.e. the doctrines of the nature of God (Trinity) and Jesus.

One Mormon commenter to last week’s blog suggested that the courts will have to decide on the current controversy in North Carolina. However, the Cub Scout pack is run by Christ Covenant Church, and thus the church should be allowed to make an important decision such as this. As the Associated Press article points out, the church “is within its rights to deny the (family) leadership positions.”

The boys were allowed to stay in the pack, as they should have been. However, the parents desired a position that would have involved authority over these children, many of whom were certainly children of the church’s members. In response, the parents made the decision to withdraw their children, even though the kids apparently enjoyed the activities. Is it just me, or does pulling them out because the parents didn’t get their way sound just a bit selfish?

Here’s a final point with an illustration. Being new to our Utah neighborhood, our youngest daughter was recently invited by some nice LDS neighbors to a weekly craft group that takes place at a near-by house. We were specifically told that the group is not affiliated with the LDS Church, and while the leader is true-blue Mormon, no overt theology (i.e. Mormon doctrine) would be taught during the projects. It was all about being creative and having fun with other neighborhood kids.

Imagine my surprise when my daughter came home last week and explained how the leader was teaching the craft lesson from the LDS Standard Works. At one point, the leader exclaimed, “Isn’t it wonderful how someday all of us will be gods? You all believe that, don’t you, children?” My daughter was the only one not raising her hand.

I have a choice. I can allow my child to continue attending, perhaps after talking to the leader and voicing my concerns.  Or I could decide not to allow her to attend, maybe even trying to start my own group. But for me to demand that I ought to be allowed to lead the group is not even an option. If it is, then maybe I ought to see if the local LDS seminary (a one-hour daily church school for high school students) could use some volunteer help. After all, I have 17 years of Bible teaching experience aimed at that very age group and even own a teaching credential. I wonder how my offer would be received.