Pushing the temple (and tithing) on the people 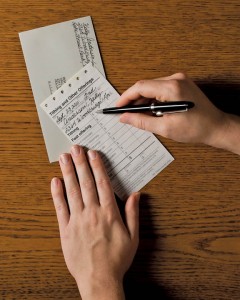 In the last General Conference held in April 2011, three leaders of the LDS Church made a concerted effort to reiterate the importance of the temple.

Saying that three new LDS temples were announced at the conference and 26 others under construction, President Thomas S. Monson declared on April 2, “If you have not yet been to the temple or if you have been but currently do not qualify for a recommend, there is no more important goal for you to work toward than being worthy to go to the temple. Your sacrifice may be bringing your life into compliance with what is required to receive a recommend, perhaps by forsaking long-held habits which disqualify you. It may be having the faith and the discipline to pay your tithing. Whatever it is, qualify to enter the temple of God. Secure a temple recommend and regard it as a precious possession, for such it is.” (“The Holy Temple—a Beacon to the World,” Ensign, May 2011, p. 93)

He added, “Until you have entered the house of the Lord and have received all the blessings which await you there, you have not obtained everything the Church has to offer.” At the same conference, Apostle Richard Scott gave a related message called “The Eternal Blessings of Marriage” that specifically dealt with temple marriage. And later, Seventy Carl B. Pratt taught on tithing called “The Lord’s Richest Blessings,” saying, “Let us not be accused of robbing God. Let us be honest and pay our debts to the Lord. All He asks is 10 percent. Integrity in paying our debts to the Lord will help us be honest with our fellowman.” (p. 102) He later wrote, “It has been my personal experience that the surest way to pay tithing faithfully is to pay it as soon as I receive any income. In fact, I’ve found it to be the only way…tithing is not a matter of money, really; it is a matter of faith—faith in the Lord.”

The stress on tithing continued in the June 2011 Ensign with a lead article written by Henry Eyring, a member of the Church’s First Presidency (“The Blessings of Tithing,” pp. 4-5).  He wrote, “To receive the gift of living with Him forever in families in the celestial kingdom, we must be able to live the laws of that kingdom (see D&C 88:22). He has given us commandments in this life to develop that capacity. The law of tithing is one of those preparatory commandments.” Even the youth and children were given tithing messages in articles titled “Enough Money” and “I Can Pay Tithing” (p. 6)

According to Monson’s own statistics, 85% of all church members live within 200 miles of a temple. In fact, there were only 21 LDS temples in the world by 1980, which was 150 years after the founding of the church. Yet in the past three decades, a whopping 115 temples were built.  To get into any of these temples now dotting the entire world, a person must tithe to qualify for a temple recommend.

About 15 years ago, I saw a quote somewhere that said how fewer than one in four Latter-day Saints regularly attended the temple. Many members (outside of Utah) went through civil ceremonies rather than getting married for “time and eternity” in the temple. Perhaps the percentages for attendance are higher now, I don’t know. I’m guessing, however, that this renewed focus  on going to the temple was made because not as many Saints are keeping (or even obtaining) their temple recommends, especially paying their tithing.

And why is this so? Well, for one, I’m guessing the recession has played its role. Of course, this is something Monson mentioned when he said, “it may be having the faith and the discipline to pay your tithing.” This is why Pratt told the emotional story of his poor relatives in the 1920s who paid their tithing despite their poverty. I’m sure there are some requirements the interviewing bishop might be able to wink at (i.e. an occasional failing with a cup of coffee or failing to wear the sacred temple garments). But the tithe is the most obvious black and white issue. A lawyer who only gives $3,000 during the course of a year is obviously way below his 10 percent requirement.  And thus, if “tithing settlement” reveals just too much to pay, the recommend is forfeited. What can you do?

And what happens when you get to the temple? Consider the primary song quoted by Monson:

I love to see the temple.
I’ll go inside someday.
I’ll cov’nant with my Father;
I’ll promise to obey.

An impossible goal, of course, for the “promise to obey” will never be kept. That’s what they say “repentance is for,” but if you read the words of Mormonism’s most prominent men over the years, the commandments are not something to shirk. One’s exaltation depends on it. And to keep people from thinking too much, LDS leaders keep their members busy, busy, busy, working for this unattainable goal.

The Gospel is so much more than following a list of commands that might look good (righteous) on the surface but are full of dead men’s bones (Matthew 23:27-28). Is the LDS Church lining its pockets while telling its people to live the impossible dream? You may disagree, but I think it is.

9 Responses to Pushing the temple (and tithing) on the people