Courage to View the Gold Plates

Pomeroy Tucker was a contemporary of Joseph Smith. Living in Palmyra, New York, he knew the Smith family, counted Martin Harris among his friends, and was actively engaged in the 1830 printing process of the Book of Mormon. 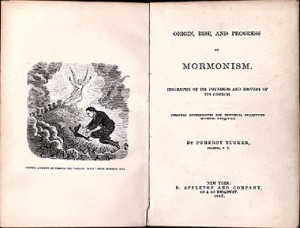 In 1867 Pomeroy Tucker published a book about Mormonism titled, “Origin, rise, and progress of Mormonism: Biography of its founders and history of its church.” The book is highly critical of Joseph Smith and the religion he founded, and is itself criticized for Mr. Tucker’s lack of careful and new research. However, according to Mormon historian Richard L. Anderson, “Tucker does relate much valuable information concerning the period of the publication of the Book of Mormon…Most of Tucker’s unattributed particulars of the Smiths’ early Palmyra life are probably based on his observation” (quoted in Dan Vogel, Early Mormon Documents, 3:87).

Pomeroy Tucker’s book relates an unusual story concerning the gold plates that purportedly contained the text for the Book of Mormon. What follows is from “Origin, rise, and progress of Mormonism,” pages 30-33.

“[Joseph] Smith told a frightful story of the display of celestial pyrotechnics on the exposure to his view of the sacred book—the angel who had led him to the discovery again appearing as his guide and protector, and confronting ten thousand devils gathered there, with their menacing sulphureous flame and smoke, to deter him from his purpose! This story was repeated and magnified by the believers, and no doubt aided the experiment upon superstitious minds which eventuated so successfully.

“Mr. Willard Chase, a carpenter and joiner, was called upon by Smith and requested to make a strong chest in which to keep the golden book under lock and key, in order to prevent the awful calamity that would follow against the person other than himself who should behold it with his natural eyes. He could not pay a shilling for the work, and therefore proposed to make Mr. Chase a sharer in the profits ultimately anticipated in some manner not definitely stated; but the proposition was rejected—the work was refused on the terms offered. It was understood, however, that the custodian of the precious treasure afterward in some way procured a chest for his purpose, which, with its sacred deposit, was kept in a dark garret of his father’s house, where the translations were subsequently made, as will be explained.

“An anecdote touching this subject used to be related by William T. Hussey and Azel Vandruver. They were notorious wags [jokers], and were intimately acquainted with Smith. They called as his friends at his residence, and strongly importuned him for an inspection of the ‘golden book,’ offering to take upon themselves the risk of the death-penalty denounced. Of course, the request could not be complied with; but they were permitted to go to the chest with its owner, and see where the thing was, and observe its shape and size, concealed under a piece of thick canvas. Smith, with his accustomed solemnity of demeanor, positively persisting in his refusal to uncover it, Hussey became impetuous, and (suiting his action to his word) ejaculated, ‘Egad! I’ll see the critter, live or die!’ And stripping off the cover, a large tile-brick was exhibited. But Smith’s fertile imagination was equal to the emergency. He claimed that his friends had been sold by a trick of his; and ‘treating’ with the customary whiskey hospitalities, the affair ended in good-nature.”

Sharon surrendered her life to the Lord Jesus Christ in 1979. Deeply passionate about Truth, Sharon loves serving as a full-time volunteer research associate with Mormonism Research Ministry. Sharon and her husband live in Minnesota.
View all posts by Sharon Lindbloom →
This entry was posted in Book of Mormon, Mormon History and tagged Book of Mormon, Gold plates, Joseph Smith, Pomeroy Tucker. Bookmark the permalink.

74 Responses to Courage to View the Gold Plates