The “genius” of the Book of Mormon 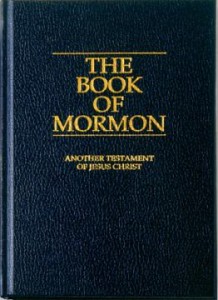 During a General Conference talk on October 2 (2011) LDS General Authority Tad Callister spoke about the Book of Mormon being “A Book from God.” Church News reports:

“The genius of the Book of Mormon is there is no middle ground, declared Elder Tad R. Callister of the Presidency of the Seventy. ‘It is either the word of God as professed, or it is a total fraud.’

“The Book of Mormon does not claim to be just a collection of insightful writings but the word of God — ‘every sentence, every verse, every page,’ Elder Callister said.

“Joseph Smith declared that an angel of God directed him to translate the writings of prophets in Ancient America by divine powers. ‘If that story is true then the Book of Mormon is holy scripture, just as it professes to be; if not, it is a sophisticated, but nonetheless, diabolic hoax.’

“This book must be either true or false. If true, it is one of the most important messages ever sent from God to man, affecting both the temporal and eternal interests of every people under heaven to the same extent and in the same degree that the message of Noah affected the inhabitants of the old world. If false, it is one of the most cunning, wicked, bold, deep-laid impositions ever palmed upon the world, calculated to deceive and ruin millions who will sincerely receive it as the word of God, and will suppose themselves securely built upon the rock of truth until they are plunged with their families into hopeless despair. The nature of the message in the Book of Mormon is such, that if true, no one can possibly be saved and reject it; if false, no one can possibly be saved and receive it.” (Orson Pratt, Divine Authenticity of the Book of Mormon, 1:1, October 15, 1850)

“To consider that everything of saving significance in the Church stands or falls on the truthfulness of the Book of Mormon and, by implication, the Prophet Joseph Smith’s account of how it came forth is as sobering as it is true. It is a ‘sudden death’ proposition. Either the Book of Mormon is what the Prophet Joseph said it is, or this Church and its founder are false, a deception from the first instance onward.” (Jeffrey Holland, Christ and the New Covenant, p. 334)

Though the truth-or-fraud proposition has been suggested before, what I found to be different in Mr. Callister’s talk (as reported by Church News) was his approach to determining the truth of the Book of Mormon. Most of the time Latter-day Saints point people to Moroni’s Promise, saying one can prove the Book of Mormon through a spiritual witness received via prayer. But Mr. Callister said nothing about “ask[ing] God…if these things are not true.” Instead,

“He invited members to determine the true nature of the Book of Mormon by asking themselves if the following scriptures would draw them closer to God or the devil. He quoted 2 Nephi 32:3, Helamen 5:12 and Moroni 10:32, which state, in turn, ‘… the words of Christ will tell you all things what ye should do,’ ‘… it is upon the rock of our Redeemer who is Christ, the Son of God, that ye must build your foundation;’ and ‘Come unto Christ, and be perfected in him.’”

Mr. Callister’s rhetorical questions infer that edifying teaching about Christ and salvation cannot come from “the evil one,” but he is mistaken. For example, in Acts 16 we read about a time when Paul was on his way to “the place of prayer.” A slave girl, who was “possessed with a spirit of divination,” followed behind the apostle for days, crying out, “These men are servants of the Most High God, who proclaim to you the way of salvation.” Paul eventually became annoyed and commanded the demon to come out of the girl, which it did. In this instance, the demon “taught” people that the apostle Paul was proclaiming the true way of salvation.

In Mark 1, while Jesus was teaching in a Capernaum synagogue on the Sabbath, a “man with an unclean spirit…cried out…I know who you are—the Holy One of God.” Jesus rebuked the unclean spirit and delivered the man from further torment. In this instance, the demon announced to everyone in the synagogue that Jesus was the very Holy One of God. The Bible includes many such examples of enlightening instruction being delivered by demons.

While I think Mr. Callister has suggested a faulty test in his specifics, I do appreciate his encouragement to Latter-day Saints, that they should actually make an effort to determine the true nature of the Book of Mormon — and this by taking an objective look at its origin and contents.

“Holy scripture” or “diabolic hoax”? I would like to suggest a good place to begin an objective quest to determine the true nature of the Book of Mormon is at mrm.org. Check out the articles found here , here, and here.

Sharon surrendered her life to the Lord Jesus Christ in 1979. Deeply passionate about Truth, Sharon loves serving as a full-time volunteer research associate with Mormonism Research Ministry. Sharon and her husband live in Minnesota.
View all posts by Sharon Lindbloom →
This entry was posted in Book of Mormon and tagged Book of Mormon, Jeffrey Holland, Orson Pratt, Tad Callister. Bookmark the permalink.

26 Responses to The “genius” of the Book of Mormon