Incidents of Persecution in Missouri 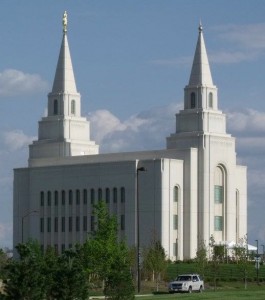 Earlier this week Michael Otterson, the head of public affairs functions for the Mormon Church, wrote at the Washington Post’s “On Faith” blog that Mormons in Missouri are currently experiencing “a time of healing” from the persecutions they suffered at the hands of Missourians back in 1838. Mr. Otterson wrote,

“In the troubled history of Latter-day Saints in the 1800s, incidents of persecution in Missouri rank among the most heinous. The brutal shooting of seventeen Latter-day Saints, including a ten-year-old child, at Haun’s Mill on Shoal Creek in eastern Caldwell County, in October of 1838 came just three days after Missouri Executive Order No. 44 – more commonly known as the “Mormon Extermination Order” issued by Governor Lilburn W. Boggs. That order was formally rescinded by Missouri Governor Kit Bond in 1976, citing its unconstitutionality.

“Every Mormon knows this history from the Missouri period, and in any dispute it is rare that all the fault rests only with one side. But there was no trace of animosity, ill will or institutional memory as church leaders welcomed guests to the temple open house…

“‘Healing’ suggests not so much a debate on the rights and wrongs of history in which none of us had a part, as much as a willingness to set aside modern personal biases and engage in the kind of mutually respectful treatment befitting a nation that wears religious pluralism as a badge of honor. In such a society in 2012, we don’t call each other ‘cults.’ We don’t automatically assume the worst of those who worship differently from us. We don’t mischaracterize their beliefs or quote their scriptures out of context.”

Along with Mr. Otterson, I’m all for accurate dialog and respectful treatment toward one another. The current Governor of Missouri offered an olive branch of healing to the Latter-day Saints in April (2012); it was a fine gesture. But Mr. Otterson’s message of mutual respect and accuracy does not seem to be getting through to the rank and file Latter-day Saints. Let me provide two recent examples.

While in Missouri a couple of weeks ago I visited the LDS tourist site, the Historic Liberty Jail. A sister missionary began the tour of the jail with a recitation of early Mormon history in the area then opened the floor for tour participants to share their feelings. Immediately a Mormon woman began speaking about Governor Boggs and the 1838 “Extermination Order.” With great emotion, she indignantly finished her remarks with these words: “For more than 130 years it was legal to kill Mormons in the state of Missouri!” Nearly the entire group, as with one voice, murmured in anguish. Another Mormon woman spoke up to declare that it was greed that caused the Missouri government to order that the Mormons be killed, adding insult to injury. And the sister missionary who was leading the tour explained that a “false” accusation of treason* was the vehicle Joseph Smith’s enemies used to arrest and incarcerate him in Liberty Jail.

This tour group of Mormons at Liberty Jail was fraught with “animosity, ill will [and] institutional memory” aimed at the non-Mormons of western Missouri. These people “assumed the worst” of the non-Mormons and “mischaracterized” the facts associated with this turbulent time in western American history. (Please read more about the Missouri persecutions, the alleged legality of killing Mormons in Missouri, and the Missouri Mormon War.)

Another example that Mormons are not necessarily embracing the kind of mutual respect Mr. Otterson wrote about was demonstrated outside the Kansas City Mormon Temple. The same day Mr. Otterson’s blog article posted, a friendly Christian man, Shane, stood on the public sidewalk outside the temple freely offering literature to passers by. This literature discussed various aspects of Mormonism, looking at the faith from a biblical perspective. Here’s what happened:

“A [Mormon] guy pulled up down at the [lower] zone, tried to throw the paper at Shane but missed. He then proceeded to angrily harangue Shane and finally jumped out of the car. Shane quoted Brigham Young saying to take up the Bible and compare it with the religion of the Latter-day Saints and that was the final straw. He grabbed Shane’s jaw with his left hand and gave him a close-fisted punch to the kisser.”

I’ve been to many Christian outreaches at Mormon venues and I have to say that it is rare for a Mormon to become this violent toward a critic. While the idea of mutual respect is obviously absent here, the more pertinent part of this story is the way Mormon officials responded. After the assault Shane called the police, but since he was unable to get the license plate number for identification of the man who hit him there was nothing much the police could do. However, Shane had a witness. A Mormon volunteer assigned to manage traffic for the temple open house saw the whole thing; but he refused to talk to the police. Additionally, the LDS Church has recorded video of the assault; but they are (so far) withholding any offer to allow the police to view it. With what seems like “animosity and ill-will,” are these Mormons unwilling to “set aside personal biases” to come to the aid of another who was physically assaulted by one of their own?

Mr. Otterson has written impressive words that speak of healing and mutual respect, but when the rubber meets the road it’s just the same old slippery blacktop.

Sharon surrendered her life to the Lord Jesus Christ in 1979. Deeply passionate about Truth, Sharon loves serving as a full-time volunteer research associate with Mormonism Research Ministry. Sharon and her husband live in Minnesota.
View all posts by Sharon Lindbloom →
This entry was posted in Civil Liberties, Mormon History and tagged Extermination order, Mormon History, Mormon War in Missouri, Persecution. Bookmark the permalink.

21 Responses to Incidents of Persecution in Missouri