The “Prime Cause” of 1838 Mormon Troubles in Missouri 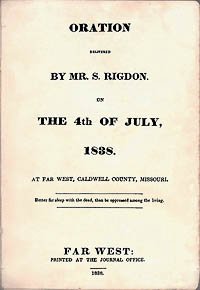 Listen to this edition of Viewpoint on Mormonism as Bill McKeever and Eric Johnson discuss a lesser-known event from Mormon history: Sidney Rigdon’s 1838 July 4th speech. Brigham Young claimed this speech “was the prime cause of [Mormon] troubles in Missouri” (Times and Seasons, 5:667).