In 1838 the headquarters of the Mormon Church was located in western Missouri. Mormons began arriving in this state in the early 1830s settling in Jackson County, around the city of Independence. However, trouble erupted between the Mormons and the non-Mormon Missourians, which resulted in the Mormons being forced out of Jackson County in 1833. Many were welcomed to Clay County, across the river to the north, where they settled and made new homes. A couple of years later, when new troubles between the Mormons and non-Mormons began, a peaceful settlement was negotiated as the state provided the Mormons a county they could call their own. The formation and settlement of Caldwell County brought about a year and a half of peace – and even friendship — between Missouri’s Mormons and non-Mormons. 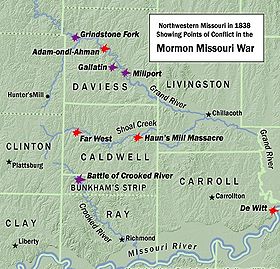 But as Mormonism grew, so many coverts gathered to Missouri that the boundaries of Caldwell County couldn’t hold them all. So contrary to the terms of the peace agreement, Mormons began settling in other counties. Thus, in 1838 hostilities began yet again.

In his book, The Mormon War: Zion and the Missouri Extermination Order of 1838, Brandon G. Kinney explained,

“When the DeWitt Mormon wagons arrived in Far West, the seasoned converts chalked up the defeat to their continued martyrdom, but the younger members were bent on revenge.” (131)

Indeed, the Mormons had had enough. Lyman Wight, a militant LDS Church leader in Daviess County, commanded a Mormon force of 350 men. Their task was to follow orders given by Joseph Smith to drive the non-Mormon residents out of Daviess County by force (135).

“The first objective was to take provisions for the winter and compensation for Mormon losses in Jackson and Carroll counties. The second objective was to drive all non-Mormons from the county. The Mormons rounded up all horses, cattle, and hogs they could find and brought them back to [the LDS settlement of] Adam-ondi-Ahman…

“Over the next few days a group of three hundred armed Mormons marched back through Daviess County loading up all the property left behind by the fleeing citizens. As they cleaned the houses out they would set fire to them to ensure that the citizens could not return.” (137-138) 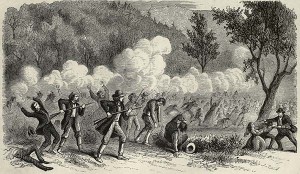 Mormon raids against the non-Mormons continued. At Gallatin the Mormons “took all the valuables and set the buildings on fire.” Mormon leader David Patten warned that all non-Mormons must leave Daviess County or face death (139).

“[F]our hundred armed Mormons visited the home of William Osbern. Finding only his wife at home, they ordered her out of the house at gunpoint and pushed and shoved her to the ground. They left no option but for her to leave immediately or be shot. They then began looting her home and preparing to set fire to it. The Mormons seized forty-two head of Osbern’s cattle. Finishing with the Osberns, the Mormons crossed the Grand River to the north side and set upon justice of the peace William Dryden…

“The Mormons took Dryden’s son, Jonathan L. Dryden, and nephew as prisoners…Young Dryden was sick in bed with fever but was nonetheless removed from his home and transported a mile away by his captors. At that point the Mormons left the boy…Perhaps they assumed he would die if abandoned to the elements or simply thought he was too sick to continue on; more likely, they were afraid he would spread infection. Regardless, Dryden survived…” (139-140)

In his book, Mr. Kinney related more stories of devastation wrought by Mormon troops. A doctor named Samuel Venable delivered a baby whose mother had been driven from her home while she was in labor. While the Mormons robbed and plundered her home, the woman traveled eight miles to neighboring Livingston County where she found a doctor at a campground hastily set up for refugee relief. While treating patients, the doctor saw another fleeing woman arrive at the campground carrying her four-day-old child (140).

Mormon marauders left Daviess County and plundered citizens in Livingston County as well. Mr. and Mrs. White, who had set up the refugee campground, suffered a Mormon raid when their home was plundered, their oats and corn confiscated to feed the Mormons’ horses, their fences torn down, and their standing crops destroyed (140).

All of this (and more) led to Sheriff William Morgan’s distressed October 21st letter to Missouri governor Lilburn Boggs pleading for help. “Our country is in a desperate situation [the Mormons] are burning and driving as they go,” he wrote (139).

The days that followed were filled with more threats, more rhetoric, and more Mormon raids. The culmination of this escalating violence came on October 30th when 17 Mormon men and boys were killed in a skirmish with Missouri militiamen at Haun’s Mill in Caldwell County. News of this tragic loss of life caused Joseph Smith to surrender, finally bringing an end to the Mormon War.

Who started all this trouble in Missouri? At whose feet can the blame be laid? Latter-day Saints generally blame the Missourians. Mormons share stories with one another of the way their people were mistreated, of how they suffered at the hands of their Missouri enemies, and of the injustices perpetrated against them. And they are right – they were mistreated, they did suffer, and their concerns were unjustly handled. However, as the examples detailed above demonstrate, the Mormons also mistreated people; they also caused suffering; and they also perpetrated injustices.

During those terrible weeks of October 1838 the Mormons went on the offensive. They sought to fulfill what Church leader Sidney Rigdon said would be “a war of extermination; for we will follow them till the last drop of their blood is spilled, or else they will have to exterminate us; for we will carry the seat of war to their own houses, and their own families, and one party or the other shall be utterly destroyed” (July 4, 1838; 90).

An objective look at this history reveals provocation, violence, and injustice on both sides of the conflict. As much as Latter-day Saints may want to imagine their early Mormon brethren wearing the white hats, no clear-cut good-guys-vs-bad-guys scenario existed in this Mormon War.

8 Responses to Early Mormonism in Missouri