Airbrush Correlation Up to Mormon Standards 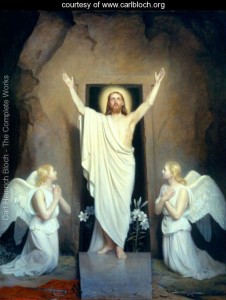 Heather, a blogger at Doves & Serpents, made an interesting discovery. In a blog posted last week (May 16, 2012) Heather, a Latter-day Saint, wrote about a painting by Dutch artist Carl Heinrich Bloch that was reproduced in the December 2011 issue of the Mormon magazine Ensign. It seems that Bloch’s painting, The Resurrection (1873), was a little risqué according to Mormon standards. Therefore, the Ensign edited the image. Heather explained,

“…it seems fair to assume that [the Ensign reproduction is] not what the artist intended.

“Some friends and I identified a few differences:

“In the Ensign version, the angels’ wings have been clipped (=removed).  That’s because Mormons don’t believe in angels with wings.

“In the Ensign version, the angels’ bare shoulders have been covered.  That’s because Mormons believe that bare shoulders are indecent.  This standard has even recently been extended to include 4 year old girls.

“During the exhibit, curators acknowledged sheepishly that sometimes in the past the Utah-based church had airbrushed out angel wings on Bloch reproductions, reflecting the Mormon view that angels are resurrected humans, not some kind of flying creatures.” (Peggy Fletcher Stack, “Mormons alter Bloch’s angels so they’re wingless and not sleeveless”)

Mormon commenters at Heather’s blog are mostly upset by the Church’s alteration of Bloch’s painting. They use words like “nutty,” “annoying,” “absurd” and “wrong” in response to the LDS revision. But one commenter saw a broader issue. He wrote,

“It would be one thing, I suppose, if the church was such a stickler for ‘detail’ in all their paintings. Yet when the church uses visual images to depict the translation of the Book of Mormon, we don’t see Joseph with his head in his hat. Instead, those sorts of glaring factual inaccuracies seemingly pass without a moment’s hesitation, and yet the church feels compelled to cut off the wings of angels in 150-year-old paintings lest we get confused.” (Randy B., Posted May 16, 2012 at 3:33 PM)

He is right, of course. The Mormon Church is quite selective regarding the importance of details.  For example, the December Ensign included a note identifying Carl Bloch’s painting and the fact that the Church had permission to use it, but it did not note the fact that the painting had been altered. The version in the Ensign was not really (or not all) by Carl Heinrich Bloch; but this detail wasn’t important enough to mention.

The Mormon Church has failed to mention many details over the years. Some, perhaps, are relatively inconsequential. But others, like changes to Mormon scriptures, are of great importance.  The Book of Mormon, Doctrine and Covenants and the Pearl of Great Price have all undergone significant changes – without any notation provided by the Church to indicate the more modern deviations from the original texts.

There are also many important unnoted changes the LDS Church has made to the History of the Church (Joseph Smith’s History) and the temple ceremonies. One commenter on Heather’s blog wrote, “The Mormon church spends an enormous amount of mental energy rewriting the past so it lines up with their cosmology.” The Church’s “correlation” of Carl Bloch’s painting for the Ensign is just one more example.

Sharon surrendered her life to the Lord Jesus Christ in 1979. Deeply passionate about Truth, Sharon loves serving as a full-time volunteer research associate with Mormonism Research Ministry. Sharon and her husband live in Minnesota.
View all posts by Sharon Lindbloom →
This entry was posted in Mormon Scripture and tagged Book of Mormon, Carl Bloch, Doctrine and Covenants, History of the Church, Pearl of Great Price. Bookmark the permalink.

18 Responses to Airbrush Correlation Up to Mormon Standards